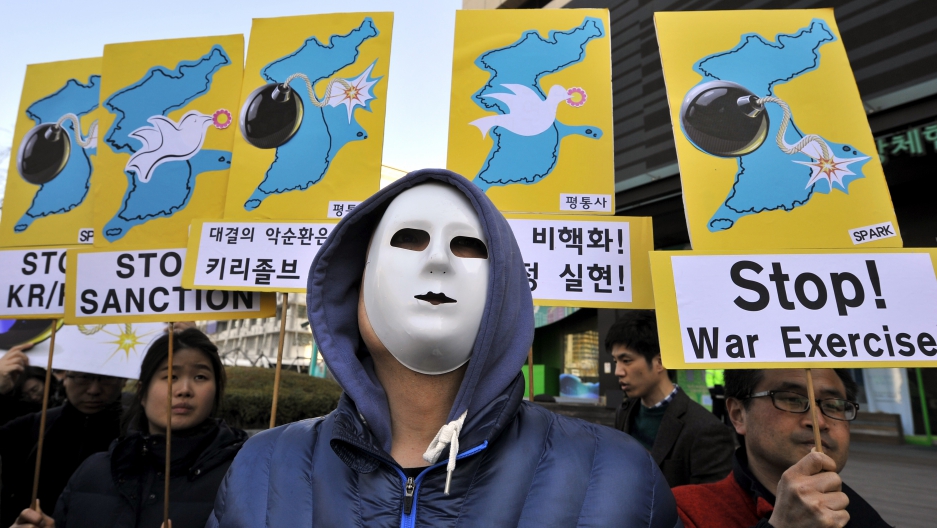 Anti-war activists wearing masks hold placards showing the Korean Peninsula during a protest against a joint military exercise between South Korea and the US, called Key Resolve, near the US embassy in Seoul on March 11, 2013.
Credit: JUNG YEON-JE
Share

SEOUL, South Korea — North Korea severed its hotline with Seoul and confirmed its decision to scrap the armistice that ended the Korean War on Monday, as South Korean and US troops launched a joint military exercise.

The two sides normally speak twice a day during the week on the hotline, which has been in place since 1971.

However, Agence France-Presse quoted a spokeswoman for the South's Unification Ministry as saying:

"The North did not answer our call this morning."

Pyongyang also threatened both South Korea and the US with nuclear attack.

The threats come in the wake of new UN sanctions against Kim Jong Un’s communist regime, which followed the North's nuclear test in February.

GlobalPost Senior Correspondent in Seoul, Geoffrey Cain, said there's some debate about whether the latest rhetoric signifies a new and serious break from the past, or whether it's more of the same.

"Some say that North Korea is in fact raising the stakes a notch, claiming it has nuclear weapons ready and is prepared to exercise its "right" to a preemptive strike," Cain said. "But others point out that despite the fiery words, North Korea is actually playing the same card it always has. The regime is using old, recycled phrases such as that it will turn Seoul into a 'sea of fire' and that the world, well, better not mess with it."

Robert Kelly, a political science professor at Busan National University in South Korea, told GlobalPost that the harsh response from Pyongyang isn't merely a reaction to the new round of UN sanctions — which could further cripple the regime's moneymaking abilities that keep it alive. The government could also be testing the strength of South Korea's new leader and first female president, Park Geun-hye, who took office late last month.

North Korea has severed contact with the South as many as five times, most recently in 2010, after 50 South Koreans were killed in attacks ordered by Pyongyang.

North Korea has said that the US mainland is within striking distance of its long-range missiles, though Washington maintains defenses capable of neutralizing a North Korean ballistic attack.