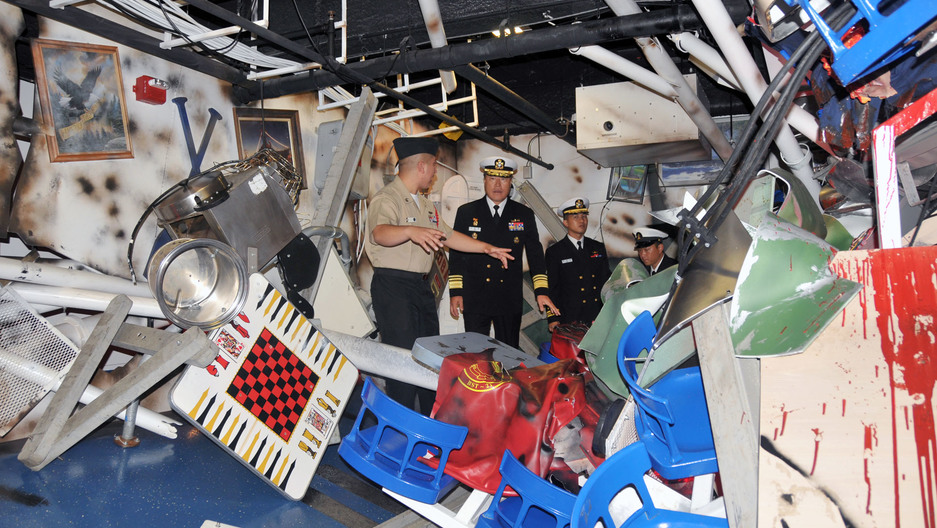 A simulation exposes a solider to a damaged berthing compartment — a situation they could encounter during combay.. (U.S. Navy photo by Scott A. Thornbloom).

Increases in post-traumatic stress disorder among soldiers returning from combat in Iraq and Afghanistan has the military looking for new ways to mentally prepare recruits before deployment.

Through war simulators and research into the brain its funding, the military hopes it can prevent PTSD.

David Noonan, national affairs editor for Reader’s Digest, says the U.S. has had about 2.5 million soldiers in Iraq and Afghanistan, and an estimated 300,000 have been diagnosed with PTSD.

The Department of Defense is spending millions of dollars to figure out effective ways to treat and, hopefully, prevent PTSD, Noonan said.

One of the military's efforts to prep a recruit's brain for 'battle mind' is the U.S. Navy's USS Trayer, a $60 million training ship that simulates the chaos and fear of war. There's also a simulation of an IED attack on a Humvee, Noonan said.

The post-9/11 conflicts these soldiers are fighting in are a perfect recipe for PTSD, Noonan says, because soldiers go on repeated tours without enough time to recover, fighting against combatants using unconventional weapons like IEDs.

Noonan says the Navy is funding the research of neurobiologist Lilianne Mujica-Parodi, who tosses volunteers out of airplanes with sensors all over their bodies to try and understand why combat veterans develop PTSD.

But optimal fear response isn’t necessarily the 'ideal warrior brain' the military is looking for, Noonan says, because if they have no response to fear they could put themselves and their fellow soldiers in danger.

"As far as to the application to preventing PTSD, I think what the military ultimately wants to do is to be able to develop and incorporate into their training program, similar to what the SEALS are doing, where you can expose recruits to stressful situations," he said. "But you also want to arm them with the psychological tools — that they need to recognize, that they need to function at maximum capacity during the stressful situation. And when it ends, they need to put it behind them and move on."

Researchers are working to understand a soldier's brain when they're stressed by looking at brain chemistry. One researcher found, with a small group of Marines diagnosed with PTSD, it's possible to strengthen their resiliency in a similar way to strengthening a muscle.

Using these simulations, Noonan says, presents a risk of trauma in their own right among ome people. But the current treatment has a success rate of just 40 percent.

"The goal is to get (soldiers) to understand that they're not on the battlefield anymore and that they don't need to respond the way they did when they were in Iraq or Afghanistan," he said.