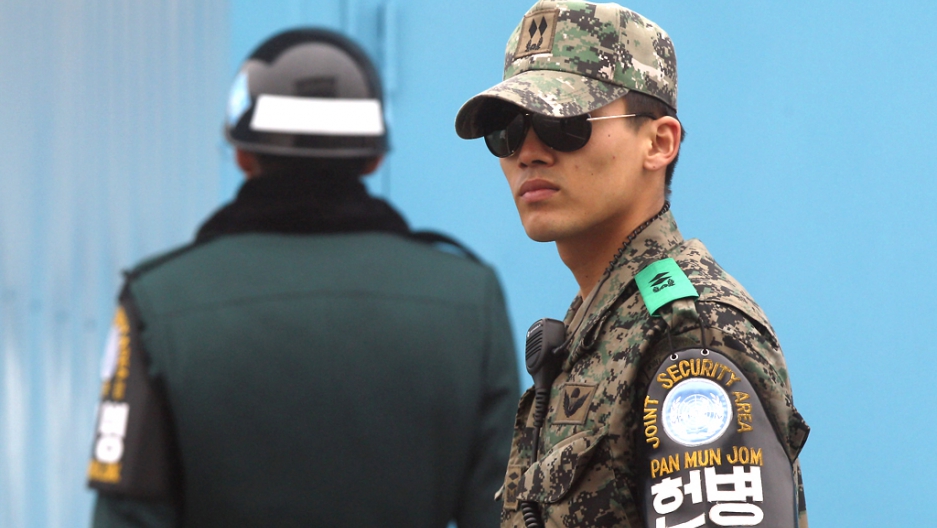 South Korean soldiers stand guard at the border village of Panmunjom between South and North Korea at the Demilitarized Zone (DMZ) on February 27, 2013 in South Korea.
Credit: Chung Sung-Jun
Share

SEOUL, South Korea — The joint military exercise the United States and South Korea began Monday raised already heated tensions with the North, prompting it to sever its hotline to Seoul.

North Korea condemned the joint US-South Korean maneuvers as a rehearsal for invasion.

However, the "war games" are nothing new. The United States and South Korea hold such drills every year. More than 3,000 US participants will take part in the exercise this year, according to a statement from United States Forces Korea.

"This year is particularly important, because it is the first time the ROK Joint Chiefs of Staff have planned and executed this combined exercise. In doing so, they are taking great strides to assume wartime operational control of forces in Dec. 2015."

The 3,000 American participants will be joined by 10,000 of their South Korean counterparts.

Another military exercise is already underway in the Korean peninsula. Foal Eagle started on March 1, and involves 10,000 US troops and a large number of South Korean troops, ships and warplanes.

The joint military exercises have always provoked strong reactions from the North, as they did during the tense summer of 2010, when North Korea threatened to respond to similar drills with the "severest punishment."

To North Korea watchers, threats from the North over such exercises are routine. However, this time, they come amid heightened tension due to North Korea's recent nuclear tests, fresh economic sanctions and the North's suspension of all its nonaggression pacts with the South.

"We’re in a crisis situation with North Korea threatening war every day," said South Korean President Park Geun-hye, according to Bloomberg. "Close cooperation with the international community is crucial in making North Korea give up its nuclear weapons and make the right choice."

The United States regularly carries out joint military exercises with its various regional allies, including Israel, the Philippines, and other Southeast Asian countries.

More on GlobalPost: Pyongyang gets happy letter from US organization

GlobalPost Senior Correspondent in Seoul, Geoffrey Cain, said there's some debate about whether the latest rhetoric signifies a new and serious break from the past, or whether it's more of the same.

"Some say that North Korea is in fact raising the stakes a notch, claiming it has nuclear weapons ready and is prepared to exercise its "right" to a preemptive strike," Cain said. "But others point out that despite the fiery words, North Korea is actually playing the same card it always has. The regime is using old, recycled phrases such as that it will turn Seoul into a 'sea of fire' and that the world, well, better not mess with it."

Robert Kelly, a political science professor at Busan National University in South Korea, told GlobalPost that the harsh response from Pyongyang isn't merely a reaction to the new round of UN sanctions — which could further cripple the regime's moneymaking abilities that keep it alive. The government could also be testing the strength of South Korea's new leader and first female president, Park Geun-hye, who took office late last month.