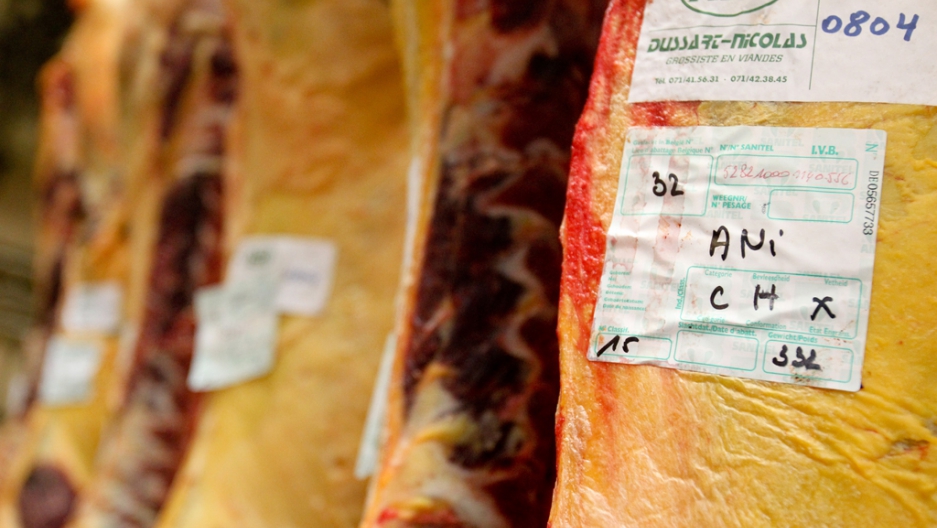 A picture taken on Feb. 22, 2013, shows traceability labels on horse meat at a slaughterhouse in the Belgian city of Charleroi.
Credit: Virginie Lefour
Share

Slice through the lightly scorched exterior and a sanguine ooze fills the plate, staining fries and salad leaves with crimson.

With pastoral watercolors and faded tributes to World War I heroes, De Kuiper's cozy decor looks unchanged for decades. But there is a new joke doing the rounds.

"Are you sure there was no beef in that?" a wisecracking diner asks the waiter.

De Kuiper specializes in horsemeat, a tradition since the 18th century in this blue-collar town on the northern edge of Brussels.

"This has always been an industrial town and back then the only meat they had came from the draught horses that pulled barges along the canals," says Lieve Gewillig, who runs the restaurant with her husband.

"It was the meat of the poor. When the horses couldn't work any more, they were killed for food."

While the discovery of horse meat in ready-meals labelled as beef has provoked a scandal in Europe, equine protein has traditionally formed part of the diet in many parts of the continent.

And if "steak de cheval" grosses you out, wait till you try their rat stew, smoked puffin or donkey salami.

The snake snacks, dog dinners or potentially poisonous blow-fish banquets of Asian cuisine may conventionally top the yuck factor list for squeamish North American palettes, but Europe too has its gastronomic weird side.

More from GlobalPost: How to cook a horse, recipes to try at home

Just as the horsemeat scandal was hitting its stride, Swiss lawmaker and farmer Edgar Sauser found an innovative way of dealing with an infestation of voles on his farm — turning them into paté.

Sauser's pest paté may be an innovation, but some of the vole's rodent cousins have long been part of food chain.

Honey-roasted dormouse was popular snack in ancient Rome and the little critters are still served as a treat in Slovenia, barbecued or stewed with marjoram and vinegar.

Dormice were a speciality in the southern Italian region of Calabria, until they became a threatened species and hunting was banned. There is rumored to be a mafia-run black-market however. A chef caught selling them in 2007 tried to hoodwink police by claiming the beasts bubbling on the stove were actually rats.

There's a restaurant in Vilnius, Lithuania, that serves "rustic beaver meat stew with champignons and tomatoes;" coypu paté is a speciality of the Poitevin Marshlands of western France; and wildlife protection campaigners in England are encouraged to tuck into platefuls of American grey squirrel, an invasive species that's threatening the local red variety.

Stewed muskrat used to be a common dish in the Flanders polder lands of western Belgium, although they gave it the more digestible name of "water rabbit." These days it's hard to find.

"I've eaten rat, but it wasn't like we had it everyday," says a Flemish journalist who preferred to remain anonymous. "What we used to eat a lot were starlings. The breasts are delicious, slow cooked in red wine."

Starlings are far from being the only songbird on the European menu. Pickled robins show up in the Cypriot dish "ambelopouli," to the anger of foreign ornithologists. In France, thrush and blackbird are specialities, but the country's greatest avian delicacy is the ortolan — a yellow, speckled, sparrow-sized bunting.

The bird is so rare, that hunting has long been banned, but poaching is reportedly rife. The late President Francois Mitterrand ordered ortolan for a final meal before he died in 1996, dining the traditional way with a towel over his head to ensure none of the little birds' precious odor is wasted.

Greenland has perhaps the weirdest bird dish. Dozens of whole seabirds, feathers and all, are packed into a seal skin, then buried for several months before being disinterred when well rotted and eaten as a festive treat. Apparently it tastes, and smells, like a particularly stinky blue cheese.

Iceland does something similar for its signature dish "hakarl," a shark left to ferment and decompose after several months underground. It's often served part of a traditional feast involving rams' testicles, seared sheep head and cured seal flipper.

Puffin, guillemot and whale also feature in Icelandic cuisine, although the trendy Reykjavik restaurant that served carpaccio of dolphin, closed down a couple of years ago.

In Oslo, the Lofotstua restaurant is inspired by the culinary delights of Norway's far northern Lofoten Islands. A typical dinner could start with fried cod tongues before moving on to minke whale in cream sauce, seal steak or cod served with cod-liver sauce.

Elk and reindeer are common enough in Finland and Sweden but, in the fall, bear meat makes an appearance. It's served in Helsinki's Saaga restaurant in a game broth with horseradish mousse. You can also take home a tin of bear paté, sold at the airport.

Further south, goat, roasted or stewed with paprika and white wine, is staple in Portugal's Alentejo region; fried bulls' testicles are a popular tapas in Spain; donkey sausage is made in the French Alps; while over the border in northern Italy the humble ass is turned into salami or braised in wine and serve with polenta.

Back in Belgium, the number of horse butchers has declined over the past decades, so restaurant owner Gewillig says she has to import meat from Argentina these days. There are, however, plenty of customers who could eat a horse.

"Business is up," she says looking around a packed dining room. "People are hearing about it on the news and thinking they haven't had horse for a while, so they come here to remind themselves how good it is."