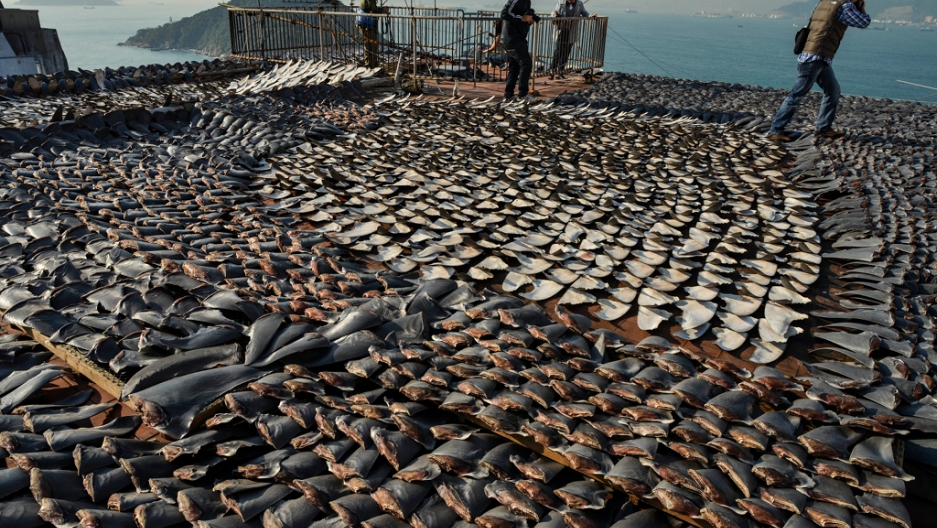 Shark fins drying in the sun cover the roof of a factory building in Hong Kong on Jan. 2, 2013.
Credit: Antony Dickson
Share

BANGKOK, Thailand — More auspicious than delicious, shark fin is rubbery in both taste and texture. While its flavor is muted, a bowl of shark fin soup says plenty in traditional Chinese culture: The hosts have money and they’re generous enough to spread it around.

But in Asia, the soup’s culinary home turf, the dish is increasingly regarded as, well, tasteless. Anti-finning advocates, armed with gruesome facts about threatened shark species, are attacking shark fin’s reputation as a status-boosting delicacy. Their mission: to see the culinary tradition die off before the sharks do.

“These shark fin restaurants are everywhere in Asia,” said Iris Ho, a campaign manager with Humane Society International. “But the issue has picked up speed because people more easily come into contact with shark fin soup than, say, tiger bone wine or rhino horns. Not eating it is a choice they can easily make.”

To many elders within China and the Chinese diaspora, a wedding without shark fin soup is like a New Year’s party without champagne. To some, the dish is so integral to business outings and big-ticket banquets that its absence suggests a snub toward guests. Even non-Chinese in Southeast Asia’s business classes have embraced the soup for its status-boosting properties.

“It’s a menu for emperors. They say it brings you luck,” said Jirayu Ekkul, coordinator of the Bangkok-based Love Wildlife Foundation. “I’ve seen plenty of weddings where, even though they’re not Chinese, they feel they have to have it.”

More from GlobalPost: Can Costa Rica save the sharks?

State-controlled media outlet The People’s Daily, seen as a window into Party-line thought, backed the ban and lamented the deaths of endangered sharks. Both wildlife groups and China’s own officialdom contend that 95 percent of shark fin consumption takes place in mainland China, Hong Kong and Taiwan. But Hong Kong is the true hub with more than 22 million pounds of shark fin products imported into the city each year, according to Hong Kong government figures.

Shark fin is singled as particularly destructive because fishermen often hack off sharks’ fins and wastefully chuck their carcasses into the sea. Unable to properly maneuver without fins, the sharks bleed out and sink to the ocean floor.

The latest research into endangered shark populations, recently published in the journal Marine Policy, contends that a whopping 100 million, and perhaps up to 273 million, are killed each year. At this clip, several sought-after species — the scalloped hammerhead, the porbeagle and the oceanic whitetip — may not be able to reproduce fast enough to stave off extinction.

The premier international body regulating the wildlife trade, the Convention on International Trade in Endangered Species of Wild Flora and Fauna or CITES, meets in Bangkok this month to decide whether to more tightly regulate their catch and sale.

The resistance comes from Japan, a primary catcher of sharks and China, the primary consumer. Both nations have a vote in CITES and diplomatic sway over their trading partners, said Susan Lieberman, deputy director of international policy for the Washington, DC-based Pew Charitable Trusts.

“Countries, particularly in East Asia, have not supported protection for sharks,” she said. “The science is unquestionable. If there were a land species with as much data and information as sharks, and depleted as fast as sharks, they would’ve been listed a long time ago.”

Popular sentiment on shark fin soup is difficult to gauge. But according to a 2010 survey conducted by Bloom, a nonprofit devoted to ocean preservation, three-fourths of people in major fin soup market Hong Kong would “accept a wedding banquet menu that does not include shark fin soup.” Still, the same share of respondents, roughly 75 percent, had eaten the soup in the previous 12 months.

In less-prosperous mainland China, the survey found that fewer than one in five citizens had ever eaten the soup in their entire lives. Depending on the eatery and the portion size, a serving can cost between $65 and $200.

Among shark preservationists, the consensus is that eroding the market for shark fin soup in cosmopolitan Hong Kong or Taiwan may be possible. But in increasingly prosperous China, newly rich mainlanders with an appetite for the dish could offset these gains.

“For a lot of these wildlife products, China is the biggest market,” Ho said. “That’s why it’s key to have public education campaigns. There’s so much demand.”

In Bangkok, known as a city offering shark fin soup on the cheap, Jirayu and his fellow anti-finning activists have started pressuring hotel chains to pull the soup from their menus. A confrontational name-and-shame campaign is a last resort, said Jirayu, who expects quiet cajoling to prove more effective in face-conscious Thailand.

“Older people are the ones who really want to eat shark fins,” he said. “With the elderly, it’s hard to change their minds. But with the new generation, it’s really looking good.”

But there is sometimes a social price to pay, he said, for those who swear off shark’s fin soup. “When I realize I’m invited to a wedding that serves shark fin, I have two choices. I can go but not eat it,” he said. “But that shows a lot of disrespect.”

“So I just avoid the whole wedding by saying that I’m busy,” Jirayu said. “I think other people can do the same thing.”