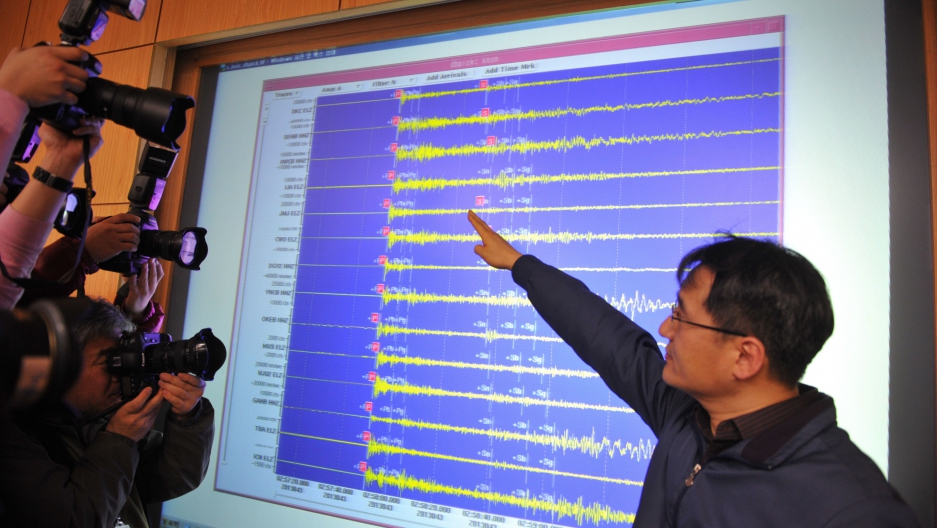 An official of the Korea Meteorological Administration shows a seismic image of a tremor caused by North Korea's nuclear test, in Seoul on February 12, 2013. North Korea staged its most powerful nuclear test yet, claiming a breakthrough with a 'miniaturised' device in a striking act of defiance to global powers including its sole patron China.
Credit: KIM JAE-HWAN
Share

The price of rice in North Korea has jumped from 5,000 won per kilogram to 9,000 won, Nambuk Story reported. Other groceries have also increased in price by approximately 70 percent.

As the English-language Ask A Korean! blog explains, the jump is likely the result of China's crackdown against smuggling across the China-North Korea border. China began enforcing anti-smuggling laws as an unofficial sanction against North Korea's nuclear tests.

Implementation of these unofficial sanctions comes several days after the United Nations Security Council imposed a fourth round of official sanctions against North Korea — the UN's strictest to date, the Wall Street Journal reported.

The jump in rice prices will likely have tragic results for North Korea's poor, malnourished population. The UN has long said that millions of North Korean children are being deprived of the food they need to develop. Nearly a third of children under five show signs of stunting, the Guardian reported last year.

In December, GlobalPost's John Sifton wrote that North Korean nuclear weapons tests are distracting the public "from the real threat that the regime poses to its own people: the government’s actualization of violence, suffering, and death for its own citizenry."