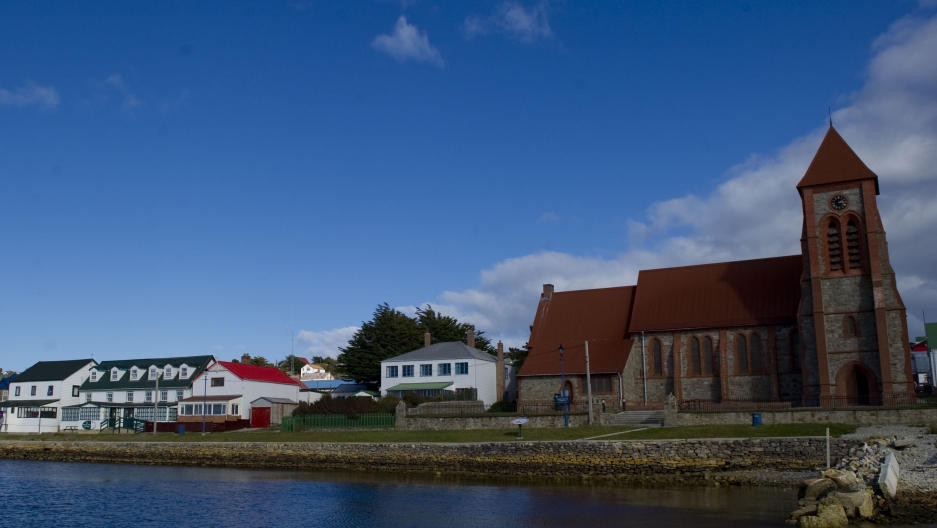 Port Stanley in the Falkland Islands. Borges compared the rivalry over the islands to a "fight between two bald men over a comb."
Credit: Martin Bernetti
Share

LONDON, UK — It’s barely visible on a world map. Penguins outnumber its 2,800-strong human population 500 to 1. And its economy mainly relies on sheep, fish and the few boatloads of tourists who occasionally pitch up on its distant South Atlantic shores.

But this month, the territory known as the Falkland Islands to the British and Las Malvinas to Argentinians will once again become the focus of a bitter standoff spanning two continents that exploded into military conflict 30 years ago.

The trigger for the fresh escalation in rhetorical hostilities is a referendum starting Sunday, when islanders will decide on their allegiances. They will choose either to remain part of the United Kingdom or go it alone, potentially building closer ties to rival claimant Argentina.

Argentina has denounced the March 10 and 11 referendum as illegal. The South American country views Britain's ties to the islands as colonial aggression that warrants UN intervention, especially as oil exploration in the region begins to pay dividends.

Britain, meanwhile, has backed the vote, confident that islanders will refuse to sever financial and military umbilical cords. Having won the war for the islands and embedded cultural reminders — fish and chip shops, red telephone boxes and, of course, several pubs — the UK seems to be backing a winner.

However, oil has raised the stakes.

At the time of the 1982 conflict, a brief but bloody land and sea skirmish that left more than 900 people dead, Argentine writer Jose Luis Borges compared the rivalry for the islands to a "fight between two bald men over a comb."

But last year saw the discovery of up to 500 million barrels of recoverable oil reserves during an exploration prospect licensed by the Falklands.

"Now this head has a lot more hair over it," Dick Sawle, a member of the island's legislature, told GlobalPost.

He says the referendum is intended as a declaration of defiance by islanders who — already cut off by their geographical location on the edge of Antarctic waters — have felt isolated by a recent diplomatic offensive by Argentina.

President Cristina Fernandez de Kirchner's government has repeatedly asserted ownership of the Malvinas citing an 1820 possession claim that pre-dates continuous British settlement on the islands (although not a British sovereignty claim dating from 1765).

With many countries, including the United States, officially neutral over the issue, there are fears among islanders that the loud tub thumping in Buenos Aires will eventually shake some bystanders off the fence.

"We felt it was very important to send out a very strong and clear message to the rest of the world,” Sawle said, “that contrary to Argentine opinion, we do exist and we do have very fundamental human rights, one of which is the right to self determination."

Fellow legislator Jan Cheek said the vote would also provide a chance to acknowledge the islands “are what we have made them.”

“As a sixth-generation Falkland islander whose grandchildren represent the eighth generation to live in the islands,” she said, “I take great exception to the Argentine claim that we are occupying colonists. There was no indigenous population, the islands were settled in waves over nearly 200 years.”

The referendum will ask 1,800 adult islanders whether they wish to retain their political status as an overseas territory of the United Kingdom, one of 14 similar tiny corners of British influence worldwide that also include Bermuda and Gibraltar.

Argentina's ambassador to London, Alicia Castro, earlier this month declared the vote illegal, insisting the outcome would not negate Argentina's claim. "This referendum in no way changes the essence of the Malvinas question and its predictable result will not bring an end to the dispute," she said.

Despite the gathering storm clouds — which prompted Britain to dispatch a warship (and possibly a nuclear submarine) last year and Argentina to pull South American allies into restricting trade ties to the islands — observers have unanimously ruled out a fresh war.

With both the British and Argentine military machines trammeled by major budget cuts, and still scarred by memories of the last time they locked horns, neither country is physically, emotionally or politically ready for conflict.

"The British are going to do nothing, they are permanently in reactive mode and have no capability to do anything preemptively," said Mark Connelly, a British military history scholar at the UK's University of Kent. "And the Argentines know that in this day and age, launching any sort of aggressive action would be madness."

With the outcome of the vote likely to repeat a similar referendum in 1986, when islanders overwhelmingly confirmed British allegiance, Argentina has already been briefing its diplomatic staff to push the "illegal vote" line regardless of the international reaction.

President Fernandez de Kirchner's steadfast support for a potentially embarrassing public relations offensive is not without purpose, however, despite her country’s poor prospects for wresting control of the islands.

Crucially, it also helps cover up the government's embarrassing withdrawal from oil negotiations with the Falklands that, thanks to the recent discoveries, could have provided a financial lifeline.

"Any Argentine president has known from about 1945 onwards that, if in doubt and faced with questions about your domestic agenda that you can't answer too easily, you press the Malvinas button," Connelly said. "It's a brilliant distraction."

Carlos Fara, a political analyst based in Buenos Aires, agrees. He points out that the referendum has helped focus the debate at a crucial time for Fernandez de Kirchner, who needs to reverse her Front for Victory Party’s plummeting popularity ratings ahead of Senate elections in October.

"I think the referendum will allow the government to tighten the discourse on the subject with which to take advantage in an election year,” he said.

Not everyone views the situation as little more than an impasse.

Connelly believes the vote could highlight the diversity of the people who now call themselves Falklanders.

"These are not Little Englanders clinging on to the rocks on the other side of the world,” he said. “There are a lot of people from Chilean background, a few from St. Helena and even Filipinos."

"There’s a sense in which the Argentinian government has tried to make it sound like Anglo Saxon gringos against the rest,” he added. “But people might now realize it’s more complex. It will be interesting to see what happens when other Latin Americans are on the island and really want to remain part of Britain."

More from GlobalPost: Argentina love hotels shoot for the stars

In Argentina, too, there are calls for alternative viewpoints.

Historian Luis Alberto Romero points to a rising popular disillusionment in Argentina and the government’s nationalistic outbursts over the "trauma" of Las Malvinas.

Writing in the Argentina's La Nacion newspaper, he suggested one solution to the problem would be for Argentina to resolve its own domestic issues in order to create a country Falkland islanders may actually want to join.

"It is not impossible," he writes. "All it would take is the restoration of the rule of law, a mopping up of poverty and the rebuilding of the state. It is not easy or quick. But when we reach the goal and have a normal country, the islanders may request to join Argentina."

It’s ironic, he points out, that if Argentina did achieve that goal, its need for powerful expressions of nationalism would evaporate. "The trauma of the Malvinas would probably be gone."