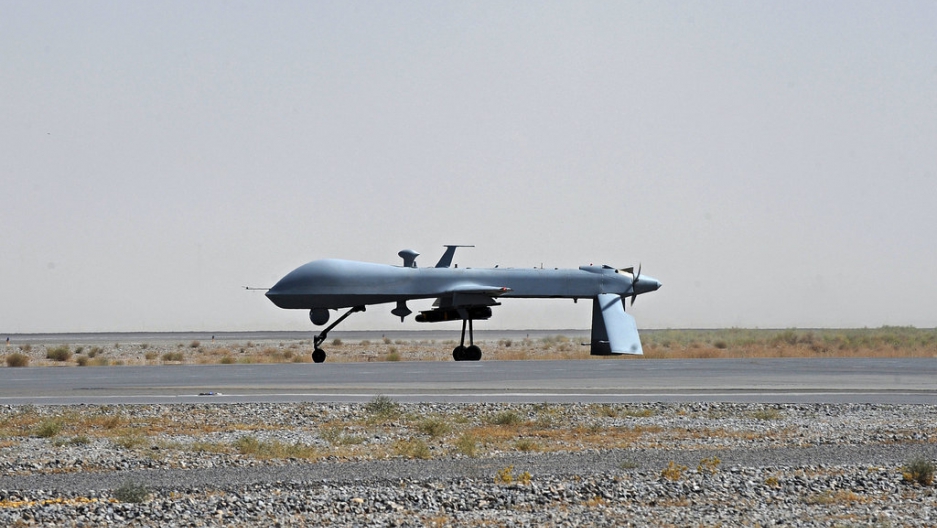 A US Predator unmanned drone armed with a missile stands on the tarmac of Kandahar military airport in 2010. Drones have been a key element of the fight against al-Qaeda in Afghanistan, Pakistan and elsewhere.
Credit: Massoud Hossaini
Share

LONDON — The Senate debate on the nomination of John O. Brennan to head the CIA focused attention on the use of unmanned warplanes to kill suspected “terrorists,” including US citizens, wherever they may be found.

The drone program is one of the most controversial aspects of President Barack Obama’s foreign policy. And for the news media, it is also one of the most difficult stories to cover.

The New York Times made a good stab at it recently (March 6, 2013) in a piece that pointed out how little the public really knows about the drone program; we are not even sure who is doing what to whom. The Times article noted that the two latest drone strikes reported to have taken place in a Pakistani tribal area may actually have been carried out by the Pakistani military, which “falsely attributed it to the CIA to avoid criticism from the Pakistani public.”

Think tanks and investigative journalism web sites have tried to ferret out the facts from the spin and misinformation surrounding the highly secret drone program. Even the US Senate, using its power to approve the nomination of the CIA director, has had difficulty in getting the administration to provide information on the program, which is run by the CIA.

Beyond the question of whether they are illegal or immoral – allegations the White House strongly denies - much of the reporting in the mainstream American media seems to miss a key point about the drone program: the fact that they may be ineffective and even counter-productive in the long run.

Michael Boyle, a counterterrorism expert who was an adviser on the first Obama presidential campaign, explains the basic flaws in the program in a recent academic paper that focuses on US drone strikes in Pakistan, Yemen and Somalia. (International Affairs, Chatham House, January 2013). He notes, “most Americans are unaware of the scale of the drone program operating in these countries and the destruction it has caused in their name.”

Advocates of the program argue that it is a cheap and effective way to fight terrorism, but ignore the long-term costs of drone warfare.

Drones are clearly cheaper than manned warplanes or American boots on the ground. But their degree of effectiveness is largely guesswork. Most of the strikes in Pakistan, Yemen and Somalia are carried out in remote areas where the central government has limited ability to check the results. Casualty numbers are subject to spin by all sides. The US reportedly counts all military-age males in a strike zone as “militants.”

Independent investigators such as the Bureau of Investigative Journalism at the University of London say the standards by which the CIA selects drone targets are becoming increasingly indiscriminate. Civilians have been killed in deliberate targeting of funeral processions. There have also been reports of “double tap” strikes on emergency services coming to the aid of victims. A relatively small number of “high value targets” have been killed, but most of the victims are low ranking foot soldiers or innocent civilians. Critics say drones have replaced Guantanamo Bay as the main recruiter for Al Qaeda.

Meanwhile, the United States has become increasingly involved in other countries’ civil wars, targeting insurgents who are only loosely connected to Al Qaeda, or not at all.

Michael Boyle notes that America’s relationship with Pakistan is “riddled with hypocrisy: the US sidelines the Pakistani government with drones while ‘building its capacity’ with aid and military equipment transfers, while the Pakistani government secretly cheers when drone strikes kill its enemies, publicly grandstands against the US for the rest of the strikes, and then asks for more aid, much of which is lost through corruption or diverted into wasteful military purchases to deter India.”

So why does President Obama pursue the drone program with such enthusiasm? According to one independent estimate (the administration does not release figures), the CIA launched more than six times as many drone strikes in his first term as President Bush did in two terms.

For a president who is reluctant to play the role of world policeman, drones look like an easy option, a simple way to show a war-weary public that he is “doing something” to defend America.

They may also be the cheap option. But like the sanctions program that is supposed to force Iran to give up its presumed nuclear weapons program, some experts have grave doubts that the drone program can achieve its objective of deterring terrorist acts.

Boyle fears it will cause blowback, and quotes Faisal Shahzad, the Pakistani-American who attempted a car bomb attack in Times Square two years ago. When asked by the judge at his trial in New York how he could bring himself to kill innocent people, Shahzad replied: “Well, the drone hits in Afghanistan and Iraq, they don’t see children, they don’t see anybody. They kill women, children, they kill everybody.”

The cheap option could prove to be costly in the long run.