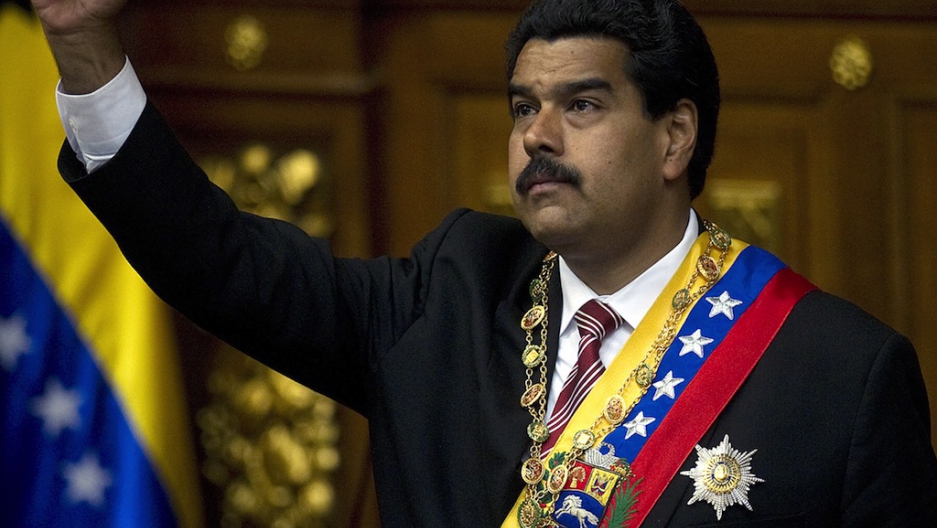 Venezuelan acting president Nicolas Maduro clenches his fist after he was sworn in as acting President, in Caracas, on March 8, 2013. Maduro took over as acting president in a ceremony rejected by the opposition after a tearful farewell to Hugo Chavez during a rousing state funeral for the firebrand leftist.
Credit: Juan Bareto
Share

CARACAS, Venezuela — Just hours after the state funeral for Hugo Chavez, the man who led Venezuela through a self-styled socialist revolution over 14 years and died after a nearly two-year battle with cancer last week, banging pots and pans erupted in Caracas’ wealthier neighborhoods.

The "cacerolazo," a favorite pot-banging form of protest across the Spanish-speaking world, took aim at the swearing-in of Nicolas Maduro as Venezuela's acting president.

Maduro, 50, will govern until new elections called for April 14 — a race in which he will run and likely win.

“Nicolas, no one elected you president,” said Henrique Capriles Radonski, the 40-year-old opposition leader who will run against him, in a televised speech sandwiched in between the daytime funeral and the nighttime inauguration on Friday.

It was a concrete sign that campaigning in Venezuela has begun, if that had not already been evident long before Chavez’s death, announced Tuesday by a visibly shaken Maduro.

“The funeral was part of the election campaign,” said Luis Vicente Leon, a Caracas-based pollster, whose firm Datanilisis correctly predicted the outcome of October’s presidential election in which Capriles lost to Chavez by 11 percentage points.

The funeral drew dozens of foreign dignitaries, from Iran’s Mahmoud Ahmadinejad to Spanish Crown Prince Felipe. Venezuelan crowds cheered the former, and booed the latter, as they whathed the ceremony broadcast on large screens erected at the Caracas military base.

Prominent US attendees included actor Sean Penn and rights activist and politician Jesse Jackson, both of whom have spoken out in favor of the Venezuelan strongman, who was a thorn in the side of Washington since coming to power.

His ally in that battle with imperialism, former Cuban President Fidel Castro, was absent, though brother Raul made the event. On taking his place in the honor guard by the president’s casket, another pariah in Washington — Ahmadinejad, a close ally of the late Chavez — tapped the coffin and clenched his fist in a revolutionary salute. He angered clerics in his home country when he gave a consoling embrace to Chavez's mother, physical contact considered a sin under strict Islamic law, The Associated Press reported.

Earlier this week, the outgoing Iranian president said he predicted Chavez would one day rise again as Jesus, in a letter penned in tribute to his anti-imperialist ally. That also drew fire from Iranian clerics.

The crew of attendees largely summed up Chavez’s foreign policy over his tenure, pivoted on its antagonism with the United States.

Scenes at Ft. Tiuna were mixed. Some cried uncontrollably at the loss of their Comandante, while others danced in the churned up mud and grass, as if they were at a music festival celebrating the continuation of the revolution which Chavez begun.

“I’m sad and joyful at the same time,” said Juan Silva, 63, a pensioner who watched scenes at the military base. “I’m sad because we lost a great world leader. I’m so happy that we’re all here and will be able to see him forever, embalmed in the glass case.”

Silva's last remark came after of Maduro's surprise announcement that, "like Ho Chi Minh, Lenin and Mao Zedong," Chavez will be embalmed and remain on public display "for eternity," in Caracas' 23 de Enero slum.

While Chavez's corpse may last forever, the question now is whether Maduro is capable of keeping Chavismo — the former paratrooper’s political ideology — alive both in Venezuela and across the increasingly moderate continent.

Just before his fourth cancer operation in December, Chavez anointed Maduro his heir should he be unable to govern. The momentum from that, coupled with the opposition’s fracture after last year’s elections, looks to make it an easy victory for Maduro.

“The death of a leader at the height of his popularity would be very powerful for elections,” Leon told El Universal, a Caracas-based newspaper, last month. “The funeral for Chavez would merge into the election campaign.”

In the crush to see Chavez’s body lying in state this week, Eric Garcia made his voting intention clear.

“Of course I’ll vote for Maduro,” the 32-year-old lawyer said. “Because Chavez chose him and he’s demonstrated that he is dedicated to the people.”

In the 23 de Enero slum on the morning of the funeral — where murals of Che Guevara and Chavez himself look down on residents along with a Last Supper mural in which Jesus is surrounded by leftist leaders such as Marx, Lenin and Fidel Castro — 60-year-old Alejandro Espinosa sits in front of a Che Guevara mural.

“I’ve got complete confidence in Maduro,” he said. “Because our president gave him all the power he needs to fight.”