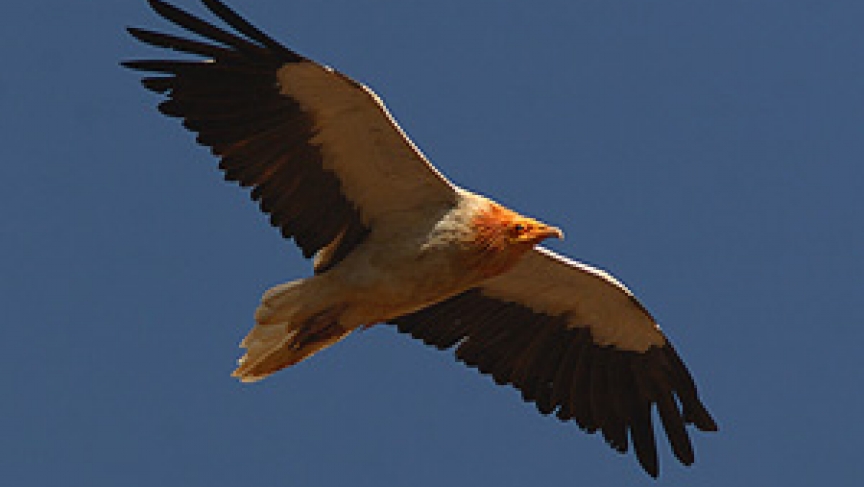 Walking along the craggy gorges of the Arda River, Petar Kalaidzhiev shows me around the Eastern Rhodope Nature Reserve, otherwise known as the vulture center.

"So we will go up the stairs through the forest, we will see some bones around the path as we go," Kalaidzhiev says. "They came from the feeding ground because when people in the region who raise animals have a dead animal, they call us and we go and take it for free, and bring it here, so the vultures can use it for food, and we can observe them."

"I think there was a corpse one week ago, but it's now mostly skin and bones," he says, as we head up the hill to a wooden viewing station.

When we get there, Kalaidzhiev scans the skies through a telescope and says that you need luck to get close to a vulture. They are usually cautious and shy, especially if they're not hungry.

"I see two Egyptian vultures," says Kalaidzhiev. "You can watch them through the telescope, they have landed on a rock just near the feeding ground. But we can't hear them from here. There was a period when there were only five breeding couples in the Eastern Rhodopes, of the griffin vultures. That was the time when people started to feed them artificially and the protected areas were created. Now the population is increasing, slowly but surely."

Hawks and eagles get better press but Kalaidzhiev says he likes vultures. He is impressed by how four different species can share the same habitat and eat the same carcasses — without competing. The Egyptian vultures are smaller and bolder, and live more spread out than the others, so they are usually the first to arrive at a corpse.

"Egyptian vultures can not open the body, because their beaks are not strong enough to tear the skin, and they fly in circles and give signals to the other species, to come and start feeding and open the body," Kaladzhiev says. "So the griffon vultures like the internal organs and the black vultures eat part of the meat and the skin. And later the Egyptian vulture goes and takes whats left on the bones and the most far to reach places because its smaller and can go inside the corpse."

We walk toward the tiny photographer's hut, offering clear views of the feeding ground 50 feet away where the reserve leaves carcasses to attract vultures.

"You can smell the corpse," says Kalaidzhiev as he opens the gate.

Watching the rocky cliffs of the Rhodope mountains from the tiny shack, not a single vulture. But it doesn't seem to matter. Kalaidzhiev says locals are thankful for the vultures, and their extra-strength stomach acids.

"They are very important because especially here in the Eastern Rhodopes," Kalaidzhiev says. "In the summer it becomes very hot. When animals die, many diseases occur. It can be very dangerous. And vultures are like sterilizers. They go and eat the meat and only bones remains, no diseases remain. They manage to kill almost all the bacterias and their spores which are sometimes very highly resistant. They even managed to disintegrate spores of anthrax, which is highly dangerous disease to cattle and people. Vultures stop spreading that diseases."

The vultures also bring birdwatching tourists, an increasingly important source of income in this poor and depopulated region. While most people might associate vultures with death, locals in Madzharovo see them as bringers of life.