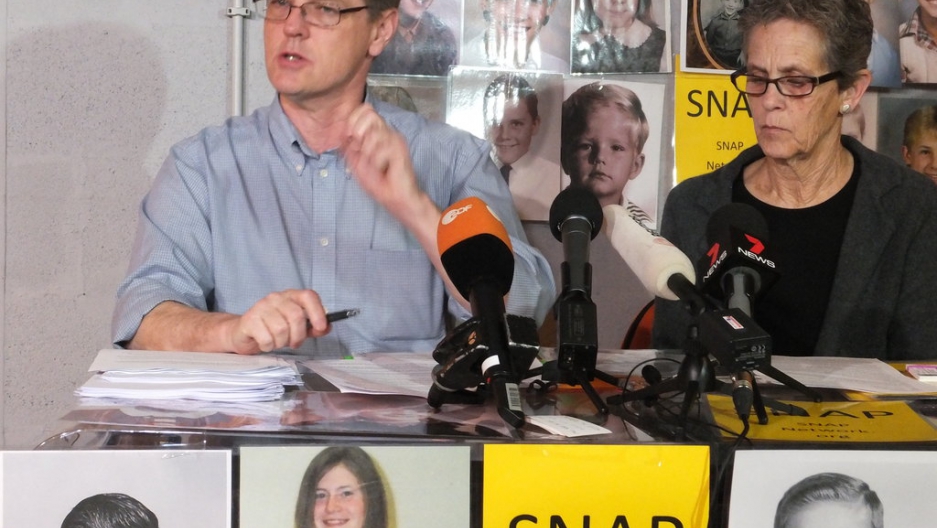 David Clohessy (L) and Barb Dorris of the Survivors Network of those Abused by Priests speak at a press conference in Rome on March 8, 2013.
Credit: Jason Berry
Share

ROME — Yesterday as cardinals huddled in secret meetings before the conclave, a leader of the women’s priest movement wearing her liturgical robes was arrested for unfurling a banner at St. Peter’s Square.

Today leaders of the abuse survivors’ movement called on bishops to fund penal centers for predator priests who avoided prosecution.

Such are the moments in a slow news town when one of the biggest stories in the world plays out behind closed doors.

SNAP — Survivors Network of those Abused by Priests — held their event in a crowded hotel conference room, with St. Louis residents David Clohessy, the national director, and Barbara Dorris, in charge of victims’ outreach, releasing a two-page list of 20 steps the new pope should take to ensure children’s safety.

“Church officials should turn to secular professionals in cases not brought to criminal proceedings,” said Clohessy, who called for the church to fund remote, securely maintained residences for pedophiles. In endorsing what he admitted was tantamount to church penal centers, Clohessy said that many bishops have such facilities today, though they are not publicized and offenders “are not getting much treatment.”

SNAP called for the dismissal of Father Robert Oliver from Boston, the newly-appointed abuse prosecutor at Congregation for the Doctrine of Faith (CDF).

”Forty percent of [Boston archdiocesan] investigations of accused priests found the charges non-credible, and that’s off the charts,” said Clohessy. “Oliver is an advocate of moving more slowly.”

Nevertheless, several Italian papers have suggested Boston Cardinal Sean O’Malley as a potential pope. O’Malley, speaking at the last briefing by American church officials on Tuesday, did not mention the abuse crisis among issues the next pope will face.

SNAP also called on the Vatican to demote Bishop Robert Finn of Kansas City, Missouri, who was convicted of a felony misdemeanor for shielding a priest who downloaded child pornography. They called for impounding passports of accused clerics lest they flee to foreign countries; halt CDF proceedings to defrock clerics as a “back end measure,” in Clohessy’s words, to underscore that “abuse and cover-up is a crime, not a sin.”

SNAP also demanded that the new pope fund a global conference of lawmakers working to ease statutes of limitations for sex abuse claims.

Reverend Janice Sevre-Duszynska, a priest from Louisville not recognized as such by the church, held a banner saying “Women Priests are Here” in St. Peter's Square on Thursday for which Italian police removed and briefly detained her.

“We’ll be holding another event soon,” she said in a voicemail message late last night.