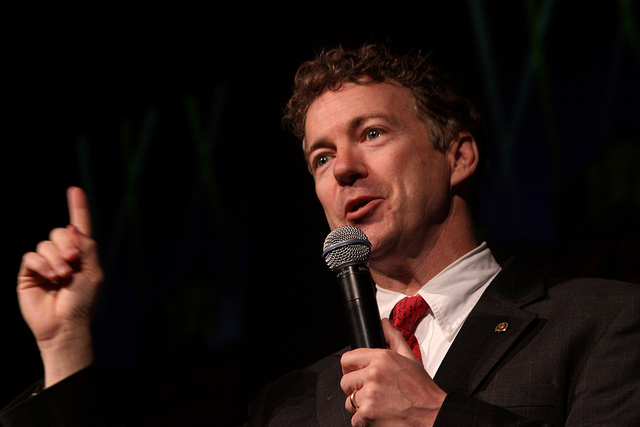 Sen. Rand Paul had the Senate floor for 13-hours straight during his talking filibuster. (Photo by Gage Skidmore via flickr).

Republican Sen. Rand Paul of Kentucky spent 13 hours this week in an ultimately futile effort to block the nomination of John Brennan to head up the CIA.

Paul's filibuster came on the heels of Brennan refusing to rule out drone attacks against American citizens in the United States. Under further questioning, Attorney General Eric Holder said he wouldn't rule out the possibility of such drone strikes in "extraordinary circumstances."

"We heard from Strom Thurmond filibustering the Civil Rights Act of 1957 and at the top he went 24 hours and 18 minutes. That is the Senate record. As far as we can tell, Rand Paul seems to be at about nine or 10 in annals of filibustering length," he said.

Talking filibusters are rare, Zwillich says, but the term filibuster is now heard frequently because the Senate is slower with many objections and cloture votes.

Paul's filibuster had help from about a dozen other senators including Democratic Sen. Ron Wyden of Oregon. During Holder's testimony Wednesday, Sen. Ted Cruz asked a U.S. citizen could be killed, even if they weren't posing an immediate thrat.

"I would not think that would be an appropriate use of any kind of lethal force," Holder said. "Let me be clear, translate my appropri to 'no.' I thought I was saying no."

The question has become hypothetical, Zwillich says, by asking if the President can target an American citizen with a drone if they're seen as an enemy combatant, even if they happen to be on U.S. soil.

But Paul and his allies were unsatisfied by Holder's answer.

On Thursday, Reuters reported Holder wrote a two-sentence letter to Sen. Paul to clarify that the president couldn't use a drone to kill an American outside of an emergency situation.

The concern over drone use involves Brennan because he was President Barack Obama's Chief of National Security Anti-terror advisor, Zwillich said. And Brennan was known to be the keeper of the U.S.'s drone strike list that the president chose from to target people overseas.

The CIA runs a lot of the drone operations out of its agency, but the Pentagon has its own drone program, Zwillich said.

"There are several senators throughout the debate on John Brennan and other military bills who want to take all of the military or paramilitary functions that have accrued at CIA, through the predator drone program or otherwise, take it away from them explicitly, and park it in the defense department," he said.

Brennan was ultimately approved on Wednesday.