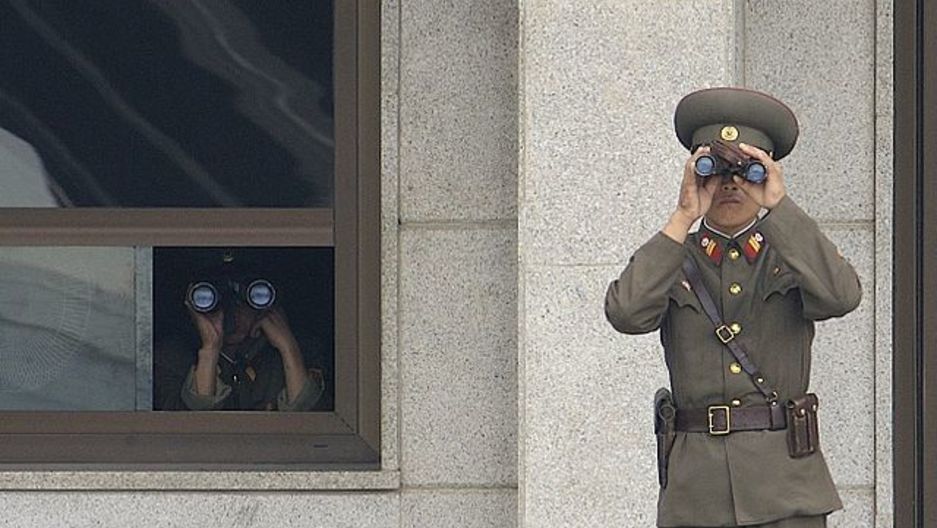 Soldiers from the North Korean People's Army stand on duty in the Korean Demilitarized Zone. (Photo by Edward N. Johnson via Wikimedia Commons.)

North Korea has threatened to launch a pre-emptive nuclear strike against the United States and South Korea.

There are also reports that North Korea's leaders have declared null and void the 1953 armistice that stopped the Korean War.

The threats are a reaction to the United Nations Security Council's consideration of new sanctions against North Korea in response to its recent missile and nuclear tests.

Charles Armstrong, director of the Center for Korean Research at Columbia University, says North Korea's threats towards South Korea have been heard before, but these threats could be more serious.

"Going back almost 20 years to 1994, the first time there was talk of U.N. sanctions for North Korea's nuclear program, they said they would turn Seoul into a 'sea of fire.' Now they've upped the ante to include Washington," he said.

A nuclear strike is unlikely, Armstrong says, because North Korea doesn't have the capacity to launch a nuclear missile. And they know it would be problematic if they did.

"I'd be a little more concerned about the rhetoric about the Korean War armistice because the last time North Korea talked about this, it was in November 2010 and they lobbed some artillery shells on the South Korean island of Yeonpyeong and killed four South Koreans," he said. "So, I think that the possibility of small-scale military action is real and should be of great concern to all of us."

The South Koreans are used to North Korea's "belligerent rhetoric," Armstrong said. But for the first time in South Korea's history they have a woman for a president, and a president who hasn't been tested yet by North Korean threats.

"There's a lot of feeling in South Korea that they need to really stand up to the North now. And in the shelling in 2010, there were many critics who said South Korea should've taken more forceful action if there was a provocation from the North," he said.

Seoul, South Korea's capital city, is 30 miles south of the Korean Demilitarized Zone, Armstrong said. And both sides are on a trigger alert.

"It could be a very dangerous situation if one side decide to launched a preemptive strike against the other," he said.