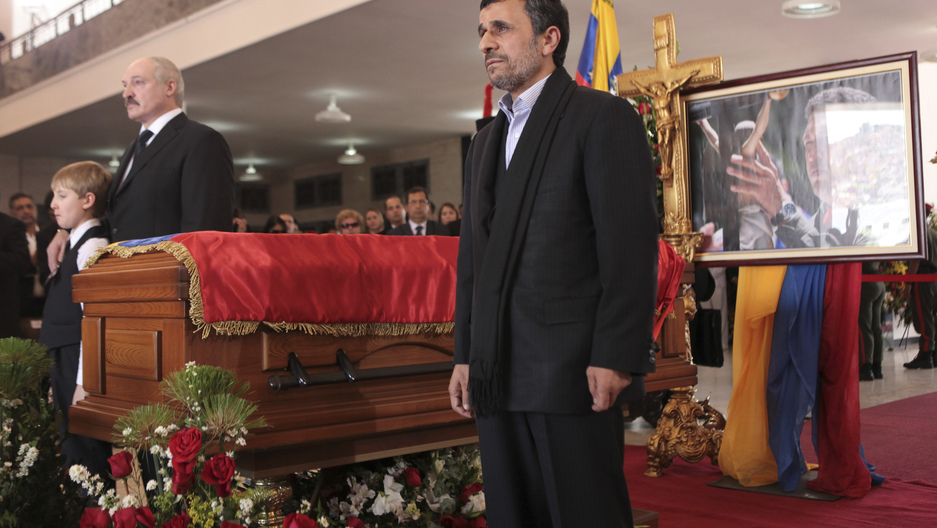 Iran's President Mahmoud Ahmadinejad stands next to the coffin of Venezuela's late President Hugo Chavez, during the funeral service at the Military Academy in Caracas March 8, 2013, in this picture provided by the Miraflores Palace. Chavez will be embalmed and put on display "for eternity" at a military museum after a state funeral and an extended period of lying in state, acting President Nicolas Maduro said on Thursday. REUTERS/Miraflores Palace/Handout (VENEZUELA - Tags: POLITICS OBITUARY) ATTENTION EDITORS - THIS IMAGE HAS BEEN SUPPLIED BY A THIRD PARTY. IT IS DISTRIBUTED, EXACTLY AS RECEIVED BY REUTERS, AS A SERVICE TO CLIENTS. FOR EDITORIAL USE ONLY. NOT FOR SALE FOR MARKETING OR ADVERTISING CAMPAIGNS - RTR3EQY5

More than 30 world leaders attended the funeral of President Hugo Chavez in Caracas.

Many were Chavez allies from around Latin America, like Cuba's Raul Castro.

Others came from farther afield, like Alexander Lukashenko of Belarus, and Iranian president Mahmoud Ahmadinejad.

Mohammed Manzapour of the BBC's Persian Service was in Caracas to cover the funeral, and the Iranian president's visit.

He said Venezuelans view Ahmadinejad's presence according to their political affiliation.