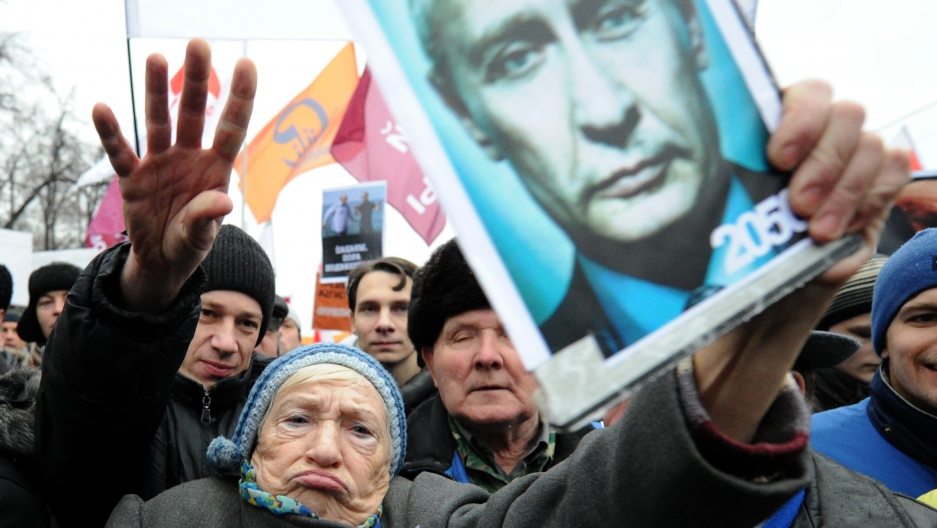 "We must learn to convince others to come out and protest,” one protest organizer says.
Credit: Yuri Kadobnov
Share

Pumped up with enthusiasm and electrified with energy as recently as a year ago, Russia’s opposition has been hobbled by accusations of inaction in the year since President Vladimir Putin’s re-election, during which the authorities have jailed anti-Kremlin demonstrators and charged key activists with crimes.

Despite the movement’s loss of momentum and dwindling numbers at public demonstrations, however, some ordinary Russians are continuing to hit the streets.

“It’s an opportunity to make an appearance, to be seen and heard,” said 61-year-old Yelena Rostova, who took part last weekend at a March for Muscovites’ Rights, organized by leftist groups and other grassroots activists.

The rally attracted a mere 2,000 to 3,000 people and was only quietly sanctioned by the coordinating council, a loose group that unites some of the opposition’s main leaders.

Nevertheless, it was part of what observers say is a trend of steady public dissent that grew out of last winter’s mass anti-Kremlin rallies and continues today.

Since establishing their coordinating council last October, the opposition’s high-profile leaders — including anti-corruption blogger Alexei Navalny and socialite-turned-TV-personality Ksenia Sobchak — have met periodically, mainly to vote on future rallies and make formal declarations. But critics say they’ve failed to do more to capitalize on popular discontent.

The authorities have helped by piling on pressure: Navalny and another key leader, firebrand leftist Sergei Udaltsov, also face criminal charges — Navalny for accusations of fraud and money laundering, and Udaltsov for allegedly plotting mass disorder.

Thanks partly to the vacuum at the top, many liberal Muscovites who helped swell earlier protests are now staying home.

But some of those who have taken the cause into their own hands are attempting to attract a more diverse crowd by appealing to “social” concerns such as increases in utilities prices and illegal construction.

Civic activist Natalia Chernysheva is a Moscow municipal deputy who helped organize the March for Muscovites’ Rights. She criticizes the opposition council for shying away from openly backing the march.

The director of a nongovernmental group called the Organization for Civil Control, Chernysheva joined a second opposition group, the “experts’ council,” after narrowly losing a seat on the opposition council.

She also criticizes the opposition’s main leaders, from politicians to bloggers to environmentalists, for failing to train and prepare “new cadres” of politicians.

Nevertheless, critics acknowledge very real concerns about public protesting, especially in the wake of the Kremlin’s crackdown on dissent.

Most notable has been the so-called “Bolotnaya Affair,” the prosecution of 19 protesters accused of inciting unrest during an opposition rally last May that ended in violence and mass arrests after police blocked protesters from reaching their sanctioned meeting place.

Named after the square where the rally took place, the case has resulted in the sentencing of one protester to four-and-a-half years in prison for his alleged role in the violence. Other defendants face even longer sentences on charges such as “using violence against a representative of the authorities.”

Political analyst Dmitry Oreshkin, a former member of a presidential council for human rights and civil society, says although the protest movement has undergone a period of “demotivation” for that and other reasons, he believes the earlier rallies helped convince and reassure opposition-minded Russians that “there’s a portion of civil society that stands in genuine opposition to the government.”

The protest movement “may not exactly be standing upright at the moment, maybe it’s prostrate, or sitting awkwardly,” he said. “But it’s nevertheless a very real cross-section of people who don’t support the government, and the authorities should take that into consideration.”

Ordinary protesters now appear less interested in supporting particular leaders than in simply voicing a range of concerns they feel aren’t being articulated.

Muscovite Nikita Kanunnikov, 25, says he continues attending protests to draw attention to the Bolotnaya Affair, in which his friend, Sergei Krivov, faces jail time for allegedly attacking a police officer.

He says he also wants to see a line-up of potential candidates for elections to the Moscow city legislature next year and to express his anger over the destruction of architectural monuments in the capital.

“I’m a bit displeased because I’d like to hear more concrete proposals, something I’m not seeing or hearing now,” Kanunnikov says. “But at least we’ve been able to achieve something so far.”

He points to the ouster late last year of Defense Minister Anatoly Serdyukov following a corruption scandal. Serdyukov’s firing was part of an ongoing Kremlin campaign against corruption, which observers say Putin has championed in order to appease a growing awareness of official graft, thanks in large part to the opposition movement.

More recently, Vladimir Pekhtin, a senior member of the ruling United Russia Party, resigned his post as parliament’s ethics committee chief after Navalny publicized claims he failed to declare his million-dollar luxury apartment and other properties in Miami Beach. Navalny has since published more compromising materials about other officials.

The revelations follow Putin's introduction of legislature that would bar officials from holding foreign bank accounts. Many believe the measures — which fit a Kremlin drive to isolate Russia from the West — are aimed at appeasing public anger over corruption and giving Putin greater leverage over the globe-trotting elite.

However they have also given rise to new allegations of official hypocrisy Oreshkin says may anger a broader array of people, including those who either traditionally support the authorities or remain apolitical, especially amid the Kremlin’s renewed focus on promoting patriotism and criticizing the United States.

“When someone like Pekhtin keeps saying that Russia is so wonderful and America is so terrible,” he said, “it’s a seriously disturbing revelation for many that he owns property specifically in the United States.”

Whether such scandals will actually drive more Russians back onto the streets remains unclear, however.

In the meantime, 34-year-old social activist Nadia Chetayeva, who spent last Saturday handing out pamphlets to a thinning crowd of protesters, says the opposition should concentrate on uniting protesters through civic activism.

“But first," she says, "we must learn to convince others to come out and protest.”