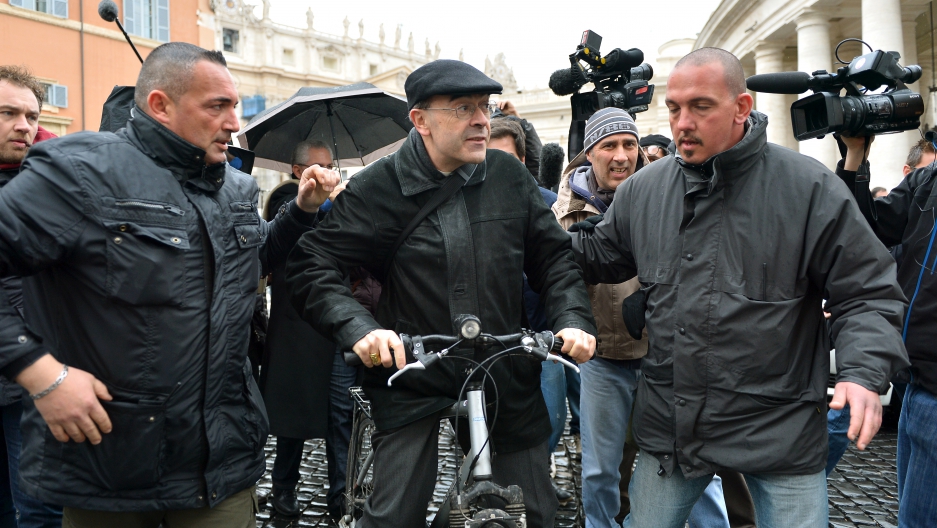 French cardinal Philippe Barbarin (C) is escorted by security as journalists surround him when leaving on his bicycle after a pre-conclave meeting on March 6, 2013 at the Vatican. The Vatican on Wednesday said no date had been set for a conclave to elect a new pope and that not all the 115 'cardinal electors' expected to take part in the vote had arrived yet.
Credit: Vincenzo Pinto
Share

ROME — Pope Benedict XVI’s farewell deprived the media of one of those rare events that rivet coverage across the globe: the solemn majesty of a papal funeral. Presidents and prime ministers seated in pews set a stately tone for the conclave to follow, as the cardinals retreat under tight security to elect the new pope, signaled by the white smoke sent up after burning their ballots.

Benedict’s resignation was visionary, laying a precedent for future popes to exit gracefully in the event of memory loss or diminished capacity. But the papacy is sede vacante — Latin for a vacant seat. The Vatican has issued a postage stamp emblazoned sede vacante to cash in on the moment.

For the media, the absence of a funeral means a news vacuum, which is being filled by reports on scandal-tarred cardinals in the abuse crisis, come to vote in the conclave; balkanized infighting of the Roman Curia; and quickening coverage, much of it speculative on the papabile, leading contenders for pope.

Cardinals are for the most part tight-lipped about their preliminary discussions in meetings, called congregations. After several briefings by American cardinals on the tenor, if not substance of those gatherings, the US delegation halted further press conferences. Information on what the cardinals are doing comes in daily Vatican press briefings that offer little substance. The cardinals have not set the date for the start of the conclave.

A slow news environment is good for go-to experts, like Jesuit Father Tom Reese, a sociologist widely interviewed in the media. “In 2005 the interviews I gave brought attention to America [the Jesuit magazine] and we landed 1000 new subscribers — that’s $30,000!” he said cheerfully.

A major topic of the coverage is how the next pope will deal with the Roman Curia, or Vatican bureaucracy, that has become bitterly balkanized. Reforming the curial operations is a core issue for the cardinals. After the Vatican prosecution of Paolo Gabriele, the papal butler who leaked internal documents to an Italian journalist, Benedict ordered three senior cardinals to determine what went wrong.

They presented him with a 300-page secret report in December. In one of his last decisions, he ordered that the report be kept confidential for his successor, but allowed the cardinals who wrote it to discuss certain findings internally if their colleagues asked.

“The Roman Curia has always been a viper’s nest,” author Vittorio Messori, who has written extensively about the papacy, told La Stampa last spring. “However in the past at least it was the most efficient state organization in the world…We seemed to be faced with resentment, rivalry, greed, maliciousness and infidelity.”

“There is a need for Curial offices to be in touch with each other,” Galveston-Houston Cardinal Daniel Dinardo said blandly in response to a question at Tuesday’s briefing: “The Curia is there in service of the Holy Father – that’s an ongoing thing.”

The butler was a stalking horse for Curial officials loyal to former Secretary of State Cardinal Angelo Sodano against his successor, Cardinal Tarcisio Bertone, according to an official at a Western embassy here who spoke on background. “The Sodano bloc was exasperated under Bertone for his lack of diplomatic experience,” the official said. “The American cardinals see this as nonsense. They want strong management to rectify things.”

Sodano, now Dean of the College of Cardinals, is presiding at meetings before the conclave. But at 85, he is five years too old vote and cannot enter the conclave. Many Vatican officials owe their careers to him, yet Sodano is a walking symbol of scandal. He repeatedly tried to abort a 1998 canon law case against Father Marcial Maciel, founder of the Legion of Christ religion order and a long-accused pedophile. In 2006, Benedict banished Maciel from active ministry.

Follieri milked investors. In 2006 he pled guilty to fraud and money-laundering charges and served six years in a federal prison. FBI agent Theodore Cacioppi has called Andrea Sodano, “an unindicted co-conspirator” for the $800,000 Follieri sent him in Italy by wire transfer for work that had no value. Follieri publicized the firm's ties to the cardinal, who was not charged in the scandal.

One of the much-discussed papabile, Cardinal Leonardo Sandri, is uniquely positioned as an Argentine of pure Italian descent. As prefect of the Congregation for Eastern Churches, Sandri is a veteran diplomat and Sodano protegé. Whether that association hurts him depends on how other voting cardinals see Sodano — as a force for continuity or stained potentate in his last hurrah. Sandri told Philip Puella of Reuters that the next pope must have “a capacity to carry out all the commitments of the papacy” and “be one who knows how to govern.”

The media narrative is a striking contrast from John Paul II’s death in April 2005 which drew a million people to Rome. Crowds this year are sparse by comparison. Back then, Cardinal Joseph Ratzinger found a forum to dramatize the gravitas that cardinals associate with papabile. As Dean of the College of Cardinals, Ratzinger substituted for a dying John Paul at Good Friday services when he spoke of “filth” creeping into the priesthood, telegraphing his resolve on clergy abuse cases. His eulogy at John Paul’s burial Mass also registered on cardinals who eventually selected him in the conclave.

Yet his own papacy was trailed by the unresolved scandal of clergy abuse, and the failure to oust cardinals who, as Princes of the Church, enjoy a de facto immunity from punishment. Case in point: Cardinal Roger Mahony of Los Angeles, now engulfed by reports about his recycling pedophiles based on clergy files released by a court order. Mahony told Catholic News Service that no one at the Vatican told him not to attend the conclave. Meanwhile Cardinal Keith O’Brien resigned as archbishop in Scotland amid reports that he made advances on young men. He apologized and will not go to Rome.

This conclave is a potential turning point for a church with 1.2 billion members after major shifts in population and regional issues. The pope historically has been a moral statesman on the global stage, an advocate for peace and diplomacy in a war-torn world. “If you want peace, work for justice,” Pope Paul VI memorably said. The papacy has a striking problem of justice in the failure to remove bishops and cardinals complicit in the abuse cases.

But other issues abound for the largest organization in the world. In 1900, two-thirds of Catholics lived in Europe and North America, the rest spread across Latin America, Africa and Asia. Today's population data have reversed. North America and Europe have only about a third of the world’s Catholics, while church attendance plummets. Two-thirds of church members come from Latin America, black Africa, and Asia. Ireland, once the most culturally Catholic of countries, has barren seminaries after a traumatic abuse crisis that stigmatized Cardinal Sean Brady, another papal elector. In contrast, Nigeria’s seminaries are full, the Catholic population surging. The issues in Africa are entrenched poverty and attacks on Christians by Islamic militants.

Italians have roughly a third of the 115 cardinal electors; whether they unite behind one candidate, or scatter their support in a shift toward a new pope from a country the south, is a major question in the run-up.

The coverage has surreal overtones of a political campaign in which the leading candidates are cautious in interviews, not wanting to seem as if they are campaigning.

“One cannot recall,” wrote Sandro Magister, religion correspondent of L’espresso newsweekly, “a previous conclave so much in the dark and so vulnerable to external and internal pressure. But it is the ’fourth power,’ that of the media, that is granting no truce to the cardinals called to the conclave.”

Magister, who has excellent Curial sources, gave a virtual endorsement in a June column on changing dynamics of the church in saying “the signs are pointing to a single [papal] candidate: Canadian Cardinal Marc Ouelett.”

Ouelett has a power base as prefect of the Congregation for Bishops, selecting new members for the hierarchy.

The long-shot candidate is Cardinal Luis Tagle of the Philippines, 56, and invested as a cardinal only in November. He radiated charisma at the reception on his installation at the Apostolic Palace; though he has been praised for pastoral qualities, and has spoken out for justice in the abuse crisis, he has no experience in the Curia. Some cardinals might view that as a hinderance; but if the electors revolt against the Roman insiders, he could be the choice. That would be an electrifying story — an Obama moment — for the oldest church in Christendom.