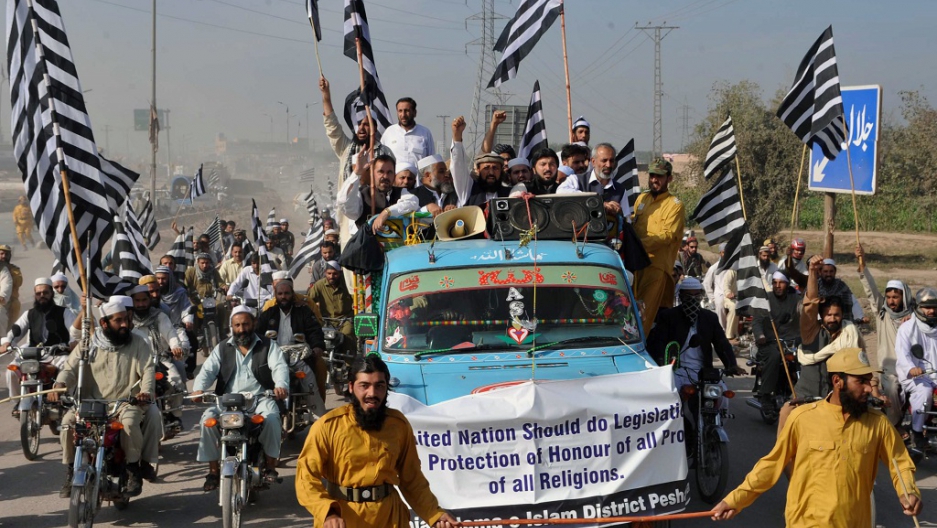 Activists of Jamiat ulema-e-islam (JUI) Pakistan participate in a rally in Peshawar on November 15, 2012. The demonstrators demanded the United Nations prepare legislation for protecting the honour of all prophets of all religions, following backlash against the 'Innocence of Muslims,' an amateurish film depicting the Prophet Mohammed as a thuggish deviant which triggered a wave of violent protests that left dozens dead in September.
Credit: A Majeed
Share

Muslim hackers in the Izz ad-Din al-Qassam Cyber Fighters launched the third phase of their Operation Ababil campaign against US-based banks on Wednesday, making further demands that the YouTube video “Innocence of Muslims” be removed from the web.

Known to many as the Muslim world's Anonymous, Izz ad-Din issued an ultimatum on Tuesday that their distributed denial of service (DDoS) attacks against American banking institutions would continue unless insults against the Prophet Mohammed were removed from YouTube.

“During runnnig [sic] Operation Ababil Phase 3, like previous phases, a number of american [sic] banks will be hit by denial of service attacks three days a week, on Tuesday, Wednesday and Thursday during working hours,” read the group’s latest statement.

More from GlobalPost: Silk Road: Can an eBay for meth, smack and pot previal?

Outages have been reported by customers of Bank of America, Capital One, Citibank, PNC Bank, Union Bank and Wells Fargo, according to Site Down, a website that tracks reported online outages. However, no banks have reported experiencing any issues with their online services.

"At this point, we've had no issues on our end," Bank of America spokesman Mark T. Pipitone told Information Week Wednesday.

Unlike Anonymous, the Izz ad-Din Cyber Fighters seem to abide by strict, self-imposed regulations. During phase two of Operation Ababil, YouTube removed the original version of “Innocence of Muslims” from the site — as promised, the hacker collective ceased attacks once their demands were met.

But new copies of the video have reappeared on YouTube, and the Izz ad-Din Cyber Fighters say they will not tolerate more insults levied against Prophet Mohammed.

“Now at the end of one month time it is seen that other copies of the film yet exist in YouTube so we announce the Phase 3 of Operation Ababil will start this week,” read the group’s statement.

For phase three, Izz ad-Din is using a complex calculation to issue banks an exact dollar amount each will lose in the attacks. Using a combination of the video’s traffic statistics, Izz ad-Din determined that US Banks should pay $874.7 million in compensation.

A loss at that levels requires about 11 weeks of DDoS attacks.

Taking their name from a Syrian preacher that fought against French, British and Zionist elements in the Levant in the 1920s and 1930s, the collective has wrapped itself in the rhetoric of anti-imperialism.

However, the goals of the organization are now limited to removing "Innocence of Muslims" from YouTube. The insults made against Prophet Mohammed served as a catalyst for uniting the collective.

The Izz ad-Din al-Qassam Cyber Fighters collective is the first hacker group that acts in defense of Islam.

Since the founding of the Izz ad-Din al-Qassam collective, several other Muslim hacker groups rose to prominence in attacks carried out against Israeli domains during the Israeli Defense Forces’ assault on Gaza late last year. Muslim hackers from Algeria, Morocco and Pakistan, among others, carried out DDoS attacks and defacement of Israeli domains during the cyberattack campaign.