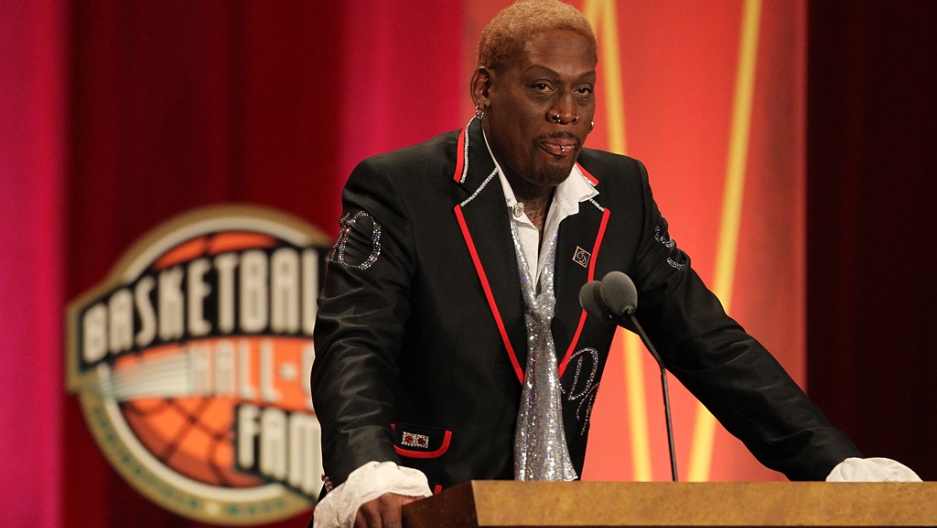 Dennis Rodman speaks during the Basketball Hall of Fame Enshrinement Ceremony at Symphony Hall on Aug. 12, 2011, in Springfield, Mass. Rodman's recent trip to North Korea makes him the latest in a long line of musicians, artists and athletes who have helped open Asian dictatorships to the world.
Credit: Jim Rogash
Share

SEOUL — Now that Dennis Rodman is home, how many Washington policymakers are bitter that they didn’t get to be the first American to meet Kim Jong-un?

John Kerry is perhaps one, joining a chorus of critics jabbing at the NBA hall of famer.

The defense Rodman mounted in an interview with ABC’s George Stephanopoulos on Monday wasn’t exactly eloquent. “Guess what? Don’t hate me,” was his awkward conclusion after a minute of stumbling over his claim that Bill Clinton’s sex scandal is comparable to North Korean prison camps.

But look past the bumbling, and it’s possible that the seemingly clueless Rodman is part of a grander, gradual change that State Department bureaucrats have been trying — and failing — to achieve for two decades. He’s the latest in a line of artists, musicians, scientists and athletes to visit this “hermit state,” helping to open the Asian dictatorship to the world.

So far, Nate Thayer of NK News has published the most thorough account, explaining how the Kim dynasty came to love basketball. Kim Jong-il had an affinity for the sport during the height of the popularity of the Chicago Bulls in the 1990s, pushing his son to inherit the hobby.

North Korea is even home to the world’s tallest basketball player, Michael Ri, and the sport occasionally fuels international exchange. In June 2012, Koryo Tours, a Beijing-based tour agency, also took a group of players — though not as well-known as the Harlem Globetrotters — to train children.

But basketball isn’t the only channel of informal diplomacy exploited by a country facing the heaviest sanctions — and diplomatic isolation — in the world.

North Korea occasionally invites foreign music virtuosos, whom the White House has been dismissive toward, too. In 2008, the New York Philharmonic Orchestra brought some 300 foreigners to a concert in Pyongyang, where it performed the American and North Korean national anthems, along with the Korean folk song "Arirang."

This week, right after Rodman departed, the prominent Japanese conductor Michiyoshi Inoue landed. On Friday, he’ll be the first conductor to lead the state symphony in a performance of Beethoven’s Symphony No. 9 in D minor. North Koreans will be able to watch it on television.

In the 1980s, North Korea even harbored Yun Isang, a dissident South Korean pianist who lived in exile in Germany thanks to persecution by the Seoul military regime. Yun hoped that by engaging North Korea with music, he could promote the cause of reunification.

And let’s not forget Google chairman Eric Schmidt’s visit in January. Kim Jong-un has prioritized technology, along with sports, as a part of national development. But the State Department passed off that one too, with spokeswoman Victoria Nuland lamenting that the visit wasn’t “helpful.”

Rodman’s “slam-dunk” diplomacy most closely follows the allegory of American “ping-pong” diplomacy in 1971. The American Table Tennis Team accepted an invitation from the then-hostile Chinese government to play matches and tour the country for a week.

Upon returning, one of the players offered a view of China that Rodman could easily have said about North Korea today:

“People are just like us. They are real, they're genuine, they got feeling. I made friends, I made genuine friends, you see. The country is similar to America, but still very different. It's beautiful. They got the Great Wall, they got plains over there. They got an ancient palace, the parks, there's streams, and they got ghosts that haunt; there's all kinds of, you know, animals. The country changes from the south to the north. The people, they have a, a unity. They really believe in their Maoism."

The matches paved the way for President Richard Nixon’s 1972 visit to China. He and Secretary of State Henry Kissinger soon thawed frosty relations with Mao Zedong. Back then, China was just as isolated as North Korea is now.

Regardless of the good intentions of visitors, the Korean Central News Agency (KCNA) puts a propaganda spin on almost every high-profile foreign visit to the country.

“The propaganda showed a welcoming young leader, unafraid of the American, warmly welcoming him to enjoy a sports match. It showed an American delegation behaving as gracious and humble guests,” said Curtis Melvin, an economist who blogs at the North Korea Economy Watch. “The visuals of the delegation bowing to Kim Jong-un in public were probably just the sorts of images the propaganda apparatus was hoping to capture.”

The possibility that Rodman is just giving fodder to a repressive government doesn’t console the defectors in the South, many of who escaped poverty and political persecution through a trek across the Chinese border.

“There is a possibility that his trip helped prop up the regime as its propaganda at least indirectly,” said Kim Seok-hoon, a campaigner at the North Korean Intellectuals’ Solidarity, a group of professors and scientists from the country.“Engagement does not seem to have a great impact on reforming the current North Korean system.”

Others, like North Korea expert Andrei Lankov, believe that getting this sort of outside information to regular people in the country is needed to spark change. Perhaps State Department officials aren’t the only ones who can instigate reform in North Korea.