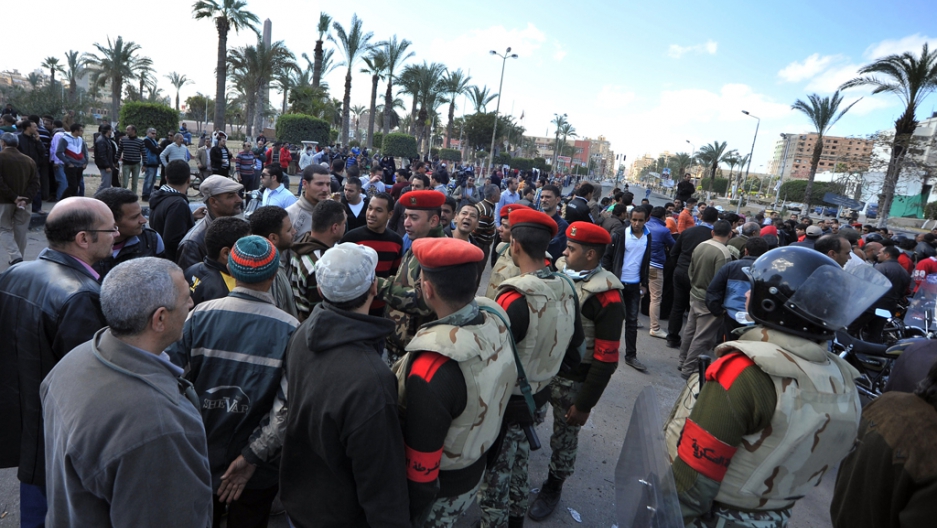 Egyptian military police men speak to protestors in the Egyptian city of Port Said on March 6, 2013 following clashes between police and protesters. Police and protesters lobbed rocks at each other under a volley of tear gas that caused several people to collapse.
Credit: -
Share

CAIRO, Egypt — Egypt has been thrown into further political turmoil after a top court suspended upcoming parliamentary elections on Wednesday.

The suspension is a major setback for President Mohamed Morsi and the Muslim Brotherhood, who had called for the elections in April hoping they would bring stability after months of violent street battles between protestors and police in various cities across the country.

The court declared that the Supreme Constitutional Court must review the new elections law before polls are held. Last year, an Islamist-dominated parliament was ordered dissolved because the law that governed its election was deemed to be unconstitutional.

The upper house will act as the temporary legislature, and The New York Times noted it is unclear how long the court would take to rule.

Some see the ruling as staving off a potential parliamentary crisis by ensuring the law is not overturned further down the road.

However, as the violence has continued and even escalated in recent days, the ongoing absence of a lower house of parliament removes a check on power that right now is highly concentrated in the presidency and upper house.

Clashes in Port Said continued for a fourth night, when hundreds of protesters gathered at the city center. They threw projectiles at the police, who retaliated by firing tear gas into the crowds.

The port city has seen violence since January, when death sentences were handed down to 20 people in connection with a riot at a football stadium last year.

As protestors battled police, thousands of low-ranking policemen continued to strike across Egypt.

Police conscripts striking against “inhumane” working conditions called for the removal of the interior minister as activists said the need for security sector reform was becoming more urgent.

Egyptians say they're fed up with government inaction over police abuses and impunity. However, neither the presidency nor the upper house, or Shura Council, has so far shown any willingness to push meaningful reforms that would likely temper the growing unrest.

The strike, on its fourth day, aimed at protesting what the policemen claim is the politicization of the force in favor of Morsi's Muslim Brotherhood party.

"For decades, Egypt’s police aggressively targeted the Brotherhood and other Islamist groups that were once outlawed," the AP reported. "Policemen say they are now being forced to confront protesters angry with Mubarak’s successor, President Mohamed Morsi, and his Brotherhood supporters."