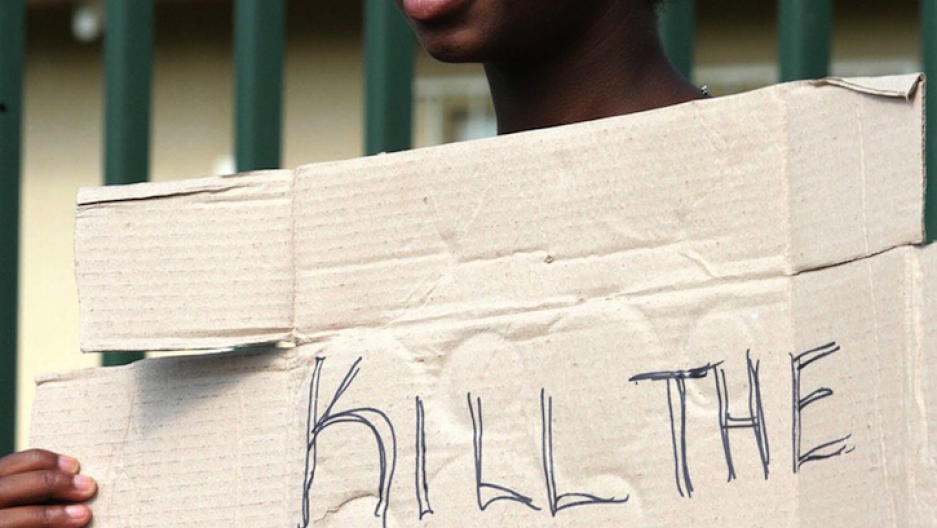 An angry resident of the South African informal settlement Skielik stands with a placard during a protest outside the Swartruggens Magistrate's Court, west of Johannesburg 17 January 2008.
Credit: Stringer
Share

JOHANNESBURG, South Africa — A South African teenager was murdered Monday outside Lukhanyo Secondary School near Randfontein by a fellow student, prompting allegations that it was a "satanic killing."

Seventeen-year-old Kamogetswe Sefularo was stabbed to death in her chest, throat and abdomen by a 15-year-old girl who allegedly drank her blood afterwards, South Africa's Eye Witness News reported.

A friend of Sefularo's told her family that "the leader and the girl who did the stabbing sucked Keamo's blood from [a wound] on her neck," the victim's brother Zali Nxabi told News24.

"Her friend even told us that she knew nothing about their cult and that their leader had always been after Keamo's blood," he added.

The suspect appeared briefly in court Tuesday, and will remain in custody until her next court appearance on Tuesday next week, according to the Times Live.

Ten of Sefularo's pupils were suspended Wednesday after the killing, though none have been formally linked to the murder, according to iAfrica.com.

GlobalPost senior correspondent in South Africa, Erin Conway-Smith, says that there have been several murders of young people where "satanism" was said to be involved, in the last few years in South Africa.

For example, there is a trial continuing in the murder of 18-year-old Kirsty Theologo who was doused with gas and set on fire in what was described as a satanic ritual.

Another example is the killing of a 6-year-old girl last month in KwaZulu-Natal province; charged in her murder is Wiseman Tholelani Shandu who is said to be part of a satanist group.

Erin Conway-Smith contributed to this article from Johannesburg.