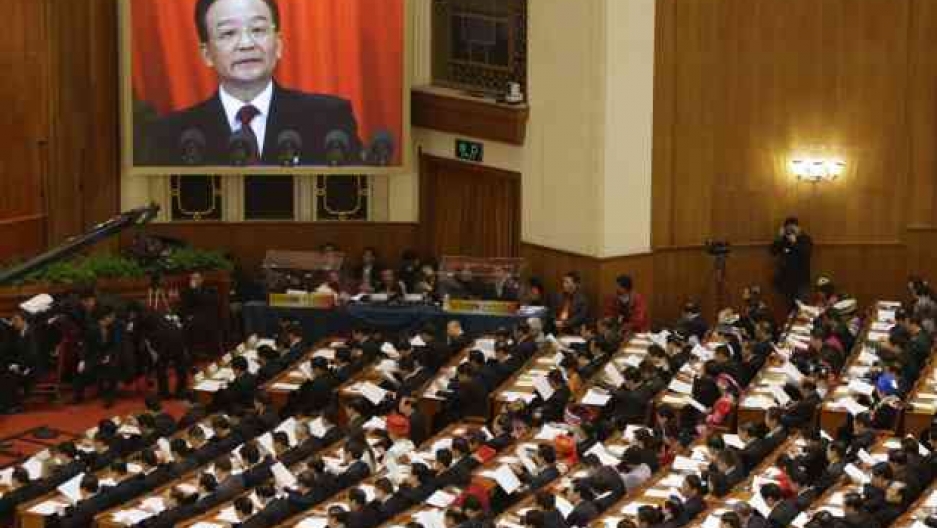 China's Premier Wen Jiabao speaks as delegates listen during the opening ceremony of the National People's Congress at the Great Hall of the People in Beijing (Photo by Jason Lee/Reuters.)

Ask Chinese citizens in the hinterland what’s on their minds as their leaders gather in Beijing during the final lap of China’s once-in-a-decade leadership transition, and you're likely to get a very similar answer.

“I feel in China now, the gap between the rich and the poor is very wide, and the poor people can never catch up with the rich people,” said Ms. Yao, an aspiring businesswoman in a flouncy peach miniskirt.

Then, there’s construction worker Wang Lin Jin, who says he wishes his salary were higher because he’s barely making it on what he earns.

“Pensions need to be higher, because the cost of living has gone up so much — and all but basic health care is out of reach," said Ms. Liu, a 63-year-old retired receptionist

All this in a country that still calls itself communist, and pledges every year around this time to put the people first.

Over the past decade, China’s economy has roared ahead. Still, departing Premier Wen Jiabao, in his final report to the National People’s Congress, which got under way on Tuesday, listed not just his government’s achievements, but also the ways in which it has fallen short.

“The development gap between rural and urban areas and between regions is large, and so are income disparities between individuals,” Wen said. “Social problems have increased markedly, and many problems in the area of education, employment, medical security, housing, the environment, food and drug safety, workplace safety and public order affect people’s interests.”

The growth in income disparity wasn’t really expected a decade ago, when Premier Wen and President Hu Jintao came to power, amidst hopeful murmurs they’d help the little guy and be political reformers. They did drop agricultural taxes and offer rural kids compulsory education. Early in their tenure, they also handled the SARS crisis with refreshing transparency — after covering it up for months.

But then the government came down again on critical voices. Nobel Prize winner Liu Xiaobo was locked up for advocating a multi-party democracy. Former newspaper editor Li Datong lost his job, because of sharp-edged reporting.

Li scoffs at current pledges to crack down on corruption. He says it can’t be done without a free press and other checks on power.

“Even the best surgeon can’t operate on himself,” Li said. “You can’t fly in the air by pulling your own hair to raise you up. Without external checks and balances, how much can you really do to fight corruption? Corruption will just get worse.”

But that’s a problem for the new government.

As for the outgoing leaders, they turned out not to be reformers after all. But they do leave an unexpected legacy. They’ve transformed China from largely a bystander in international affairs to a player, and a rather muscular one at that, pushing its territorial claims in disputed waters, and developing its military.

“We should accelerate modernization of national defense, and armed forces, so as to strengthen China’s defense and armed forces capabilities,” Wen said at the National People’s Congress. “We should resolutely uphold China’s sovereignty, security and territorial integrity and ensure its peaceful development.”

Peaceful development is what China’s new leaders say they want. And with growing social tensions, rising expectations and a tangle of contradictions to work through, they’ll have their hands full upon taking office.

New leader Xi Jinping is saying he wants to rejuvenate China. Whether history will judge a decade from now that’s what he did is still anyone’s guess.