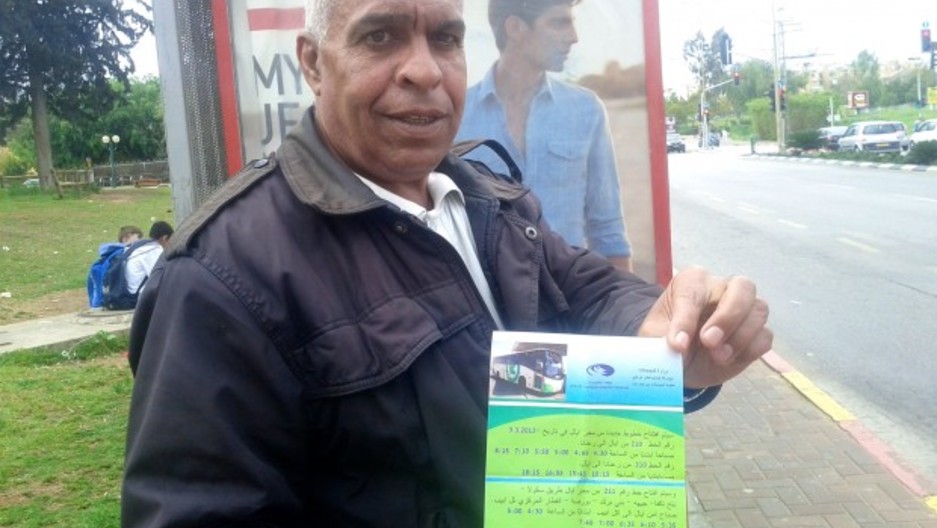 Faisal Hussein lives in the West Bank and works in Israel. He's happy about the new bus service because saves him money. (Photo: Joshua Mitnick)

Share
Matthew Bell Matthew Bell Matthew Bell is a Jerusalem-based Middle East reporter. He has been with The World since 2001 and has filed stories from cities across the US and abroad. | ALL POSTS New Israeli Bus Lines for Palestinian Workers Bring Both Resentment and Relief March 6, 2013 â?? Post a comment Faisal Hussein lives in the West Bank and works in Israel. He's happy about the new bus service because it saves him money. (Photo: Joshua Mitnick) Faisal Hussein lives in the West Bank and works in Israel. He's happy about the new bus service because it saves him money. (Photo: Joshua Mitnick) It's 5:30 a.m. The sun has just started to come up. And hundreds of Palestinian men, wearing jackets and holding their lunches, are lined up in a parking lot. They've just come through an Israeli military checkpoint on the edge of the West Bank. They're waiting to get on buses, for the last leg of their morning commute to work. "No room, no room." The driver said. And he closes the doors as the last few men squeeze themselves into the aisle. These are West Bank Palestinians with work permits to enter Israel proper. They tend to be a little older — bread winners and family men — the kind of Palestinians that Israel considers less of a security threat. Sitting in a window seat, a 36-year-old construction worker named Muhannad said, "this new bus is good. It's only a $1.35 each way. It beats getting ripped off by gypsy van operators." Muhannad said he hopes this service is here to stay. A grey-haired man named Azzem on his way to work in Tel Aviv said he agrees. "Twenty-five shekels." he said. "That's what we've been getting charged. It's criminal. That's five times the cost of this bus trip by the way." Azzem said he would like to thank the Israeli company for providing a new service for Palestinian workers. He only wishes this bus could take him all the way home to his West Bank village, instead of dropping him off outside the checkpoint. But the new bus line that's effectively for Palestinians only also stirs feelings of resentment. A man named Adl talked about riding the public bus from Tel Aviv in Israel to the large West Bank settlement of Ariel, not far from his village. Sometimes the settlers would complain to the driver about Palestinians being on the bus, he said. Adl said that one time he asked an Israeli man, 'why are you complaining? What have I done to you? We are both tired after a long day's work and we both just want to go home.' At the checkpoint, Adl said, the police took the Palestinians off the bus. And he could see that the Israelis were happy to be rid of them. As he finishes the story, several men chime in. "This is about racism," they said. "It's humiliating to be put on separate buses." For their part, Israeli officials say the new buses are not about forced segregation. Palestinians with work permits, they say, can ride on any bus they want to. As for the public, some Israelis have a problem riding with Palestinians, others don't, said 22-year-old university student Mirit. She's waiting for another bus in the West Bank settlement where she lives. "I haven't seen any problems with Israelis and Palestinians together on the bus, never," she said. "The people are living here. They take their works. This is their country too. So, of course (I ride with them)." Israeli human rights groups and some members of parliament say the bus service for Palestinian workers adds up to a policy of discrimination and racism. But Israeli peace activist Gershon Baskin said it's not so simple. "The reality is there is a poor economy next to a rich economy. The poor economy is providing workers to the rich economy. They have to move from point A to point B. There were too many workers under the current situation and the bus company saw an opportunity to make more money and added more bus lines," Baskin said. However, Baskin said the Palestinian-only buses do put a spotlight on the underlying problem. Israel continues to maintain a military occupation over the West Bank. And the two populations living there — Jewish settlers and Palestinian Arabs — do not have the same rights. "There's no such thing as separate and equal," he said. "It didn't work in America and it doesn't work here. We're living in a bi-national reality. We have been living in a bi-national reality where there are two separate economies and two separate legal systems and if that continues that becomes even more and more problematic." Baskin said the two sides could go a long way to solving the problem by reaching a political solution. Even after that though, Palestinian workers are likely to depend on the much larger Israeli economy — and maybe, some sort of bus service — for some time to come.