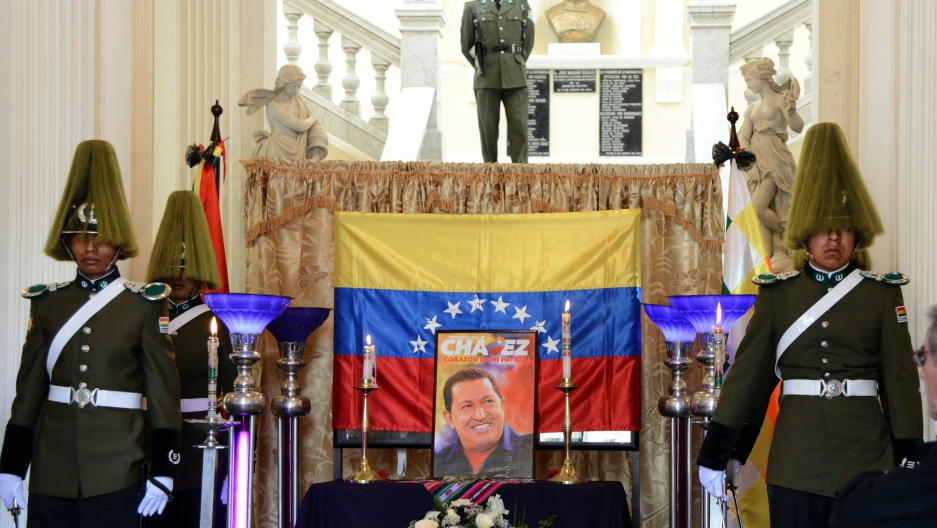 HAVANA, Cuba and LA PAZ, Bolivia — In Havana Tuesday night, the mood was somber and subdued.

A few Cubans gathered outside the city's Venezuelan Embassy, peering in from behind the fence at the head diplomatic offices of the South American country that's Cuba's closest ally. They'd come to pay their respects for the death of Venezuelan President Hugo Chavez.

"Any Cuban who really wants the best for their country and for Latin America feels terrible about this news," said Ernesto Garcia, a 24-year-old student who said he came to the embassy because he wanted to mourn with others. "Regardless of what you think about him, he undoubtedly tried to unite Latin America," he said.

Not just Venezuelans were rocked by the news of Chavez's demise. His oil-rich South American country bears huge importance in a continent where aid and favorable trade come much appreciated, as did, for many, Chavez's in-your-face defiance of what he deemed Washington's Yankee imperialism. Many Latin Americans are mourning his loss.

Asked whether he thought Chavez's death could jeopardize Cuba's economy and the billions in trade between the two countries, Garcia paused.

"I have faith that a process doesn't just depend on one person," he said. "I trust that everything he's done in these years has taken root in the conscience of Venezuelans and everyone in Latin America, and we can follow his path."

Cuba joined other Chavez allies, such as Argentina, in declaring three days of mourning and a ban on public festivities in honor of Chavez. An official Castro government statement praised him as "a son of Cuba" who had helped the country with his "extraordinary generosity." There was no statement or farewell letter from Fidel Castro, who has now outlived the Latin American leader he spent years cultivating as his political heir.

Cubans will now await the results of Venezuelan elections in less than a month, with potentially devastating economic consequences for Cuba and its trade deals if Chavez's chosen successor Nicolas Maduro doesn't win.

"My heart hurts as if I'd lost a family member," said Havana resident Miriam Suarez, 43. "I've never been to Venezuela, but I know there have been many changes to help the poor."

"A lot of people who don't know what poverty is like can't understand what was good about Chavez," she said. "But now that he's dead, maybe other changes will come, and it'll be the poor who suffer."

The Bolivian flag flew at half-mast in the presidential palace in La Paz. In the hallway inside, visible from the street, were a large wreath and photo of the late Venezuelan president. Photographers and TV crews gathered outside.

“This is bad news for Bolivia,” one bypasser, who declined to give his name, told GlobalPost. “Chavez was a good friend to us, and to the poor of all Latin America. I don’t see anyone who will take his place in defending us.”

But another, David Cruz, 37, said: “It is sad when cancer takes anyone but Chavez caused a lot of problems. He never would have become as famous as he did without Venezuela’s oil. I hope there will be no violence and that the elections will be free."