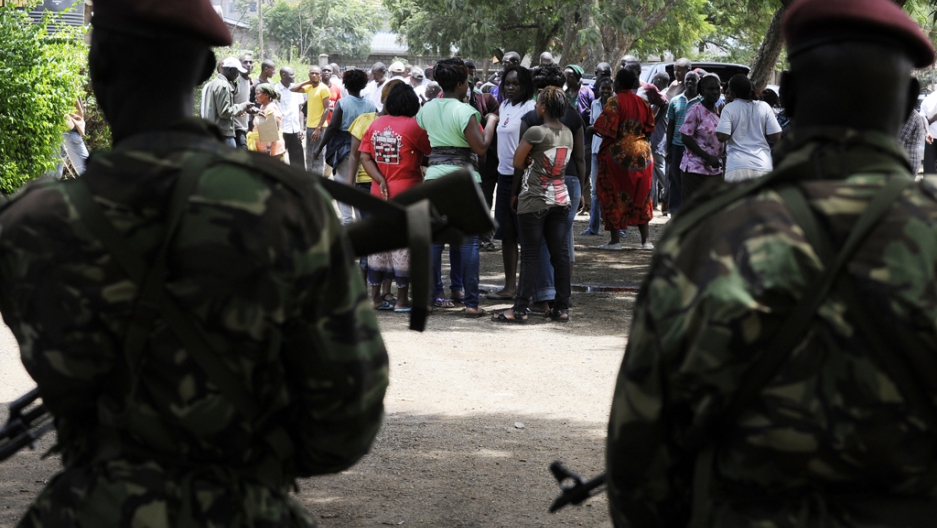 Kenyan paramilitaries stand guard at a polling station in the Mathare area of Nairobi on March 6, 2013. Kenyans continue to wait for presidential election results due to polling hangups, but in a country where elections are frequently beset by violence many are growing increasingly uneasy.
Credit: Simon Maina
Share

NAIROBI, Kenya — Kenya’s election is descending into a dangerous farce as faulty electronic systems designed to prevent fraud and speed up the vote count are abandoned, and officials on both sides of the two-horse race for the presidency trade allegations of malpractice and bias.

The last time Kenyans voted in a national election polling day itself was peaceful, but delayed results — followed by the hurried announcement of a disputed victory — triggered weeks of violence that killed more than 1,100 people.

Since then, election authorities took measures to ensure a fraud-free and transparent vote. But some of these have collapsed. The first signs of trouble came on Monday, Election Day, when the electronic voter identification system suffered a widespread failure.

“The aim of the poll books is that you can’t have more votes than people who show up on the day,” said Mike Yard, country director for United States-based nonprofit International Foundation for Electoral Systems (IFES), which is helping run the polls.

Anything unexpected raises suspicions among voters and party leaders but Yard said, “There is plenty of evidence that this is a cock-up, not mischievous intent.”

He said there were other fraud deterrents “built into the system,” including a computerized system to “red flag” unexpected results and heft punishments, including jail time, for electoral officers caught trying to fix the vote — meaning the electronic systems, while nice to have, are neither essential nor a silver bullet.

But other technical problems have dogged the transmission of results and their tallying. Early on Tuesday morning servers belonging to the Independent Electoral and Boundaries Commission, or IEBC, became overloaded and crashed as results flowed in from around the country.

The vote tally then proceeded slowly until grinding to a halt on Tuesday night. At that time, about 40 percent of 32,000 polling stations had reported a commanding 53 percent lead for Uhuru Kenyatta, who the International Criminal Court accuses of crimes against humanity relating to violence during the 2007 election. His main challenger, Prime Minister Raila Odinga, was in second place with 42 percent.

Turnout is expected to be high, around 70 percent of 14.4 million registered voters. The election commission said final results were expected on Friday.

Election commission chairman Issack Hassan announced that the electronic system would be abandoned and the old manual system, whereby returning officers make their way by road to Nairobi clutching paper results in their hands, would be used instead.

“What matters here is the final results, and they are coming in,” Hassan said.

Other points of contention have also arisen, most significantly over the inclusion of invalid votes (those posted into ballot boxes but incorrectly marked), of which there are already more than 330,000. Provisional results published by the IEBC have so far not included such votes, but their planned inclusion is expected to cause Kenyatta’s share of the vote to dip below the 50 percent needed for an outright win. That would force a run-off next month.

Hassan said the running results tally would be amended to include the invalid votes because the electoral law calls for the counting of “total votes cast.”

Unsurprisingly, while Odinga’s camp was pleased with the announcement, Kenyatta’s was incensed. William Ruto, his running mate who also faces charges at the International Criminal Court, suggested the decision could be “an attempt to deny the Jubilee Coalition a first round victory.”

In a statement issued on Wednesday, Kenyatta’s campaign team blamed foreigners for the decision, accusing them of meddling in Kenya’s election and singling out Britain for attack.

The statement decried the “shadowy, suspicious” behavior of Britain’s High Commissioner, accusing him of being “in cahoots” with a leading Kenyan human rights activist in “canvassing to have rejected votes tallied.”

The statement went on to express alarm at what it called “the sudden upsurge of British military presence in the country.”

A spokesman for Britain’s Foreign Office dismissed the allegations as “entirely false and misleading,” insisting the United Kingdom “does not have a position” on the rejected votes and that the deployment of British soldiers for training purposes is a “routine exercise … planned nine months ago.”

The ratcheting up of political rhetoric is a worrying sign in a country where elections are frequently beset by violence. But so far all parties and officials have repeated their calls for calm, patience and peace as the slow count continues.

Kenya’s leading newspaper the Daily Nation warned in an editorial of a “rocky road” ahead despite the success of polling day itself.

“Election-related violence last time occurred not during the peaceful voting and counting, but in protest after the announcement of suspect results following lengthy unexplained delays,” it told readers.

This time around there are plenty of delays, but they are being explained to the public and so far political leaders have stopped short of rejecting either the vote or the partial tally and results.