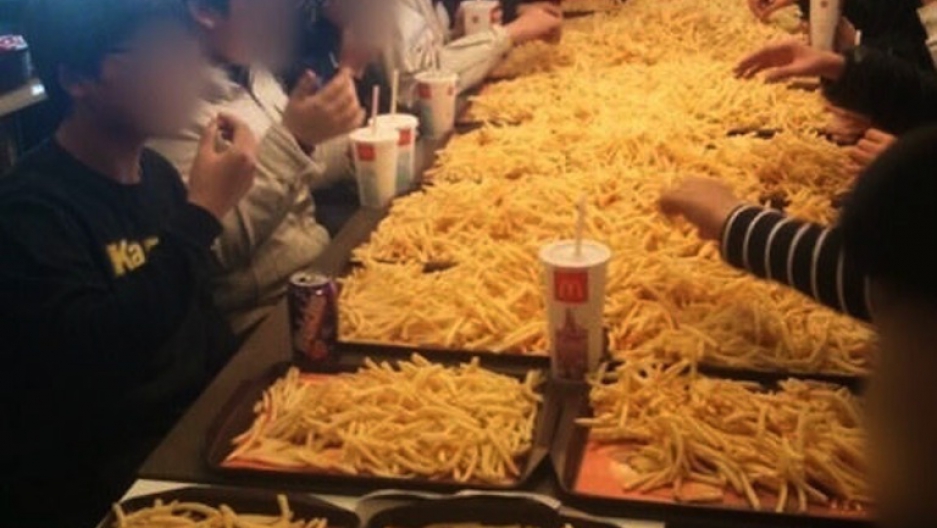 The concept is pretty simple: a group of teenagers orders around 30 large packs of fries, piles them high on a table in front of them, snaps a photo or two, and then proceeds to try and finish them all, according to Yahoo! News.

One group in the southern Japanese city of Okayama, went big with 60 portions of large fries, the Daily Mail reported.

In South Korea, a group of about 12 youngsters was kicked out of a McDonalds' after attempting to down $250 worth of French fries, the Guardian reported — the owner reportedly called them "brats" as they left. Ouch.

While Korean and Japanese food are known for being healthier than American fast food, some youth of Asia are keen on destroying their bodies as quickly as possible.

But despite wholesome dishes like kimchi and sashimi, GlobalPost senior correspondent Geoffrey Cain said it's really not surprising that people would take this on.

Ramen, the instant noodles we all love, is a Japanese invention and equally a hit in South Korea, he said.

At a lot of restaurants in Seoul, if you can gulp down your bowl of ramen in under a certain number of minutes (or sometimes even seconds), you get your bowl free.

So who could blame them from moving to massive amounts of French fries?

The gluttonous trend reportedly began after the Golden Arches lowered their French fry prices in Japan to $1.60 from the usual $2.40, sparking the first known tweet of a potato party, Yahoo! reported. The copycats weren't far behind.

In a culture like Japan which abhors waste, however, it remains unclear how long this excess-driven hobby will continue. Plus, people are getting annoyed at all the kids crowding around to watch these festivities...after all, they're standing in the way of the fast food enjoyment of others.

C'mon, kids: everyone deserves their turn at super-caloric meals.