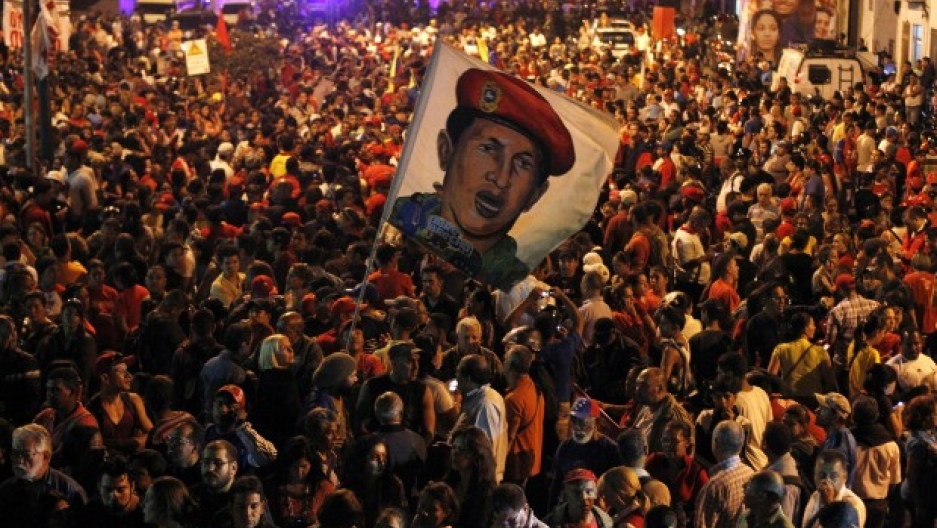 Supporters of Venezuela's President Hugo Chavez react to the announcement of his death outside the hospital where he was being treated, in Caracas March 5, 2013. Chavez died on Tuesday after a two-year battle with cancer, ending 14 years of tumultuous rule that made the socialist leader a hero for the poor but a hate figure to his opponents. REUTERS/Carlos Garcia Rawlins (VENEZUELA - Tags: OBITUARY POLITICS TPX IMAGES OF THE DAY) - RTR3EMJY

Share
Large crowds gathered on the streets of Caracas to mourn Hugo Chavez on Wednesday. It was a massive outpouring of grief for the late president. There were chants, too, defiantly proclaiming that their "comandante" lives on. Thousands of people marched alongside the casket containing Chavez's body, as it was driven from the hospital where he died Tuesday, to the Military Academy, where his body will lie in state for three days before a state funeral. "Men like our commander Chavez leave an irreparable loss,"said one man in the grieving crowd. "He was a heroic man who fought for Venezuela, especially for us, the poor." A crying woman said: "My heart is broken, Chavez took a piece of my heart." But not all people were "Chavistas." "I think the best future for Venezuela is without Chavez, but he does leave a legacy. I don't share many of his ideas, but he does leave some positive things for the country," he said. One strong supporter of Hugo Chavez was marching in that crowd. His name is Augusto Montiel, he is a member of Venezuela's National Assembly, and of Chavez's ruling United Socialist Party. Montiel said supporters vowed to continue the work of Hugo Chavez and give their support to interim leader Nicolas Maduro.