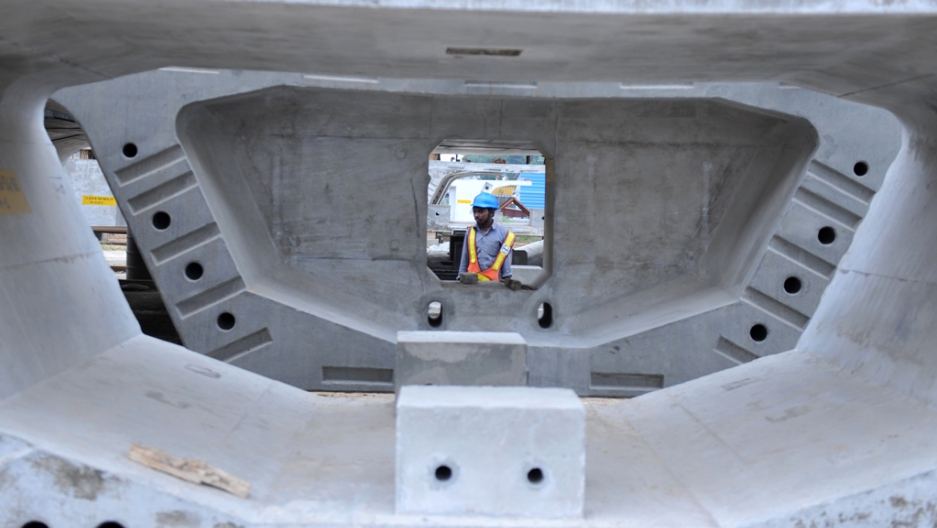 NEW YORK — Struggling economies put the brakes on infrastructure building during the financial crisis, and construction hasn’t really revved back up. That slowdown is going to hurt us, some say.

The Boston Consulting Group says the world needs to invest $1 to $1.5 trillion more in infrastructure every year through 2030 to ensure that traffic keeps moving, ports and airports remain open and lights stay on in factories and homes.

However, the big old bank loans that used to support these projects have dried up, continued high levels of unemployment have depressed tax revenue and government austerity programs are squelching spending.

Financing these projects, then, demands ingenuity and a new level of collaboration between project developers, government officials, bankers and investors.

The forum included progress reports from 40 major rail, road, port, bridge, water and electricity projects from 26 countries. Here are some of the standouts:

Etihad Rail, a 1,200 kilometer freight railway that will extend across the United Arab Emirates, from the border of Saudi Arabia to the border of Oman; Detroit River International Crossing, a new six-lane bridge between Windsor, Ontario, and Detroit, Mich., designed to facilitate increased trade between the US and Canada; and a new third airport in Istanbul that will eventually serve 150 million passengers a year.

The featured projects were drawn from CG/LA Infrastructure’s 2013 Top 100 Global Infrastructure Projects list, which identifies projects of more than $100 million around the world that offer a business opportunity — be it an investment opportunity or a 35-year contract to operate an airport — to investors or developers in 2013.

The projects that made the cut were those judged to have the most potential to boost local or regional economic productivity, create jobs and increase their countries’ global competitiveness.

According to CG/LA Infrastructure, the countries poised to spend big on infrastructure in 2013 are Brazil, followed by India, Canada, China, the United States, Saudi Arabia, Russia, Turkey, Colombia, the United Arab Emirates and Australia.

Many of this year’s top 100 projects focus on making cities work better. One such project is Hyderabad Metro Rail in southern India, a 40-mile, 66-station elevated metro rail system due to be completed in 2017.

“We are doing it as a total system connected to the main rail, bus depots and the local rail,” NVS Reddy, managing director of Hyderabad Metro Rail Ltd., said of the $2.6 billion project.

“Bicycle tracks, sidewalks, skywalks — these are all going to be part of the system. So we’re not looking at Hyderabad Metro as [just] a single transit system. We’re asking, ‘How do we make use of this project as an opportunity to redesign [Hyderabad] as a people-friendly, eco-friendly city?’”

Hyderabad Metro is also the world’s largest mass transit system being financed and operated as a public-private partnership. (The state government of Andhra Pradesh is working with Larsen & Toubro Ltd., India’s largest engineering and construction company.)

PPPs or P3s — arrangements in which private sector companies build and operate infrastructure, sometimes with government support — were a hot topic at the conference, in spite of the fact that currently only 15 percent of global infrastructure projects were structured this way in 2012, according to Dealogic.

Infrastructure developers are embracing “a totally new world of how projects are paid for, who operates them and who takes on risk,” Craig Guzinsky, director of business development at CG/LA Infrastructure, said. “Developing countries are getting their credit ratings up and starting to do much more complex transactions,” like PPPs.

That’s because infrastructure development is too important an activity to let stagnate, builders maintain.

“Infrastructure affects the competitiveness of every business in the world,” Frederico Martinez Urmenenta, chairman and CEO of Mexico City-based Grupo Tradeco, builder of Mexico’s Baluarte Bridge, said in a presentation.

“We need to see infrastructure not just as a target, but… as a tool for economic growth in our countries.”