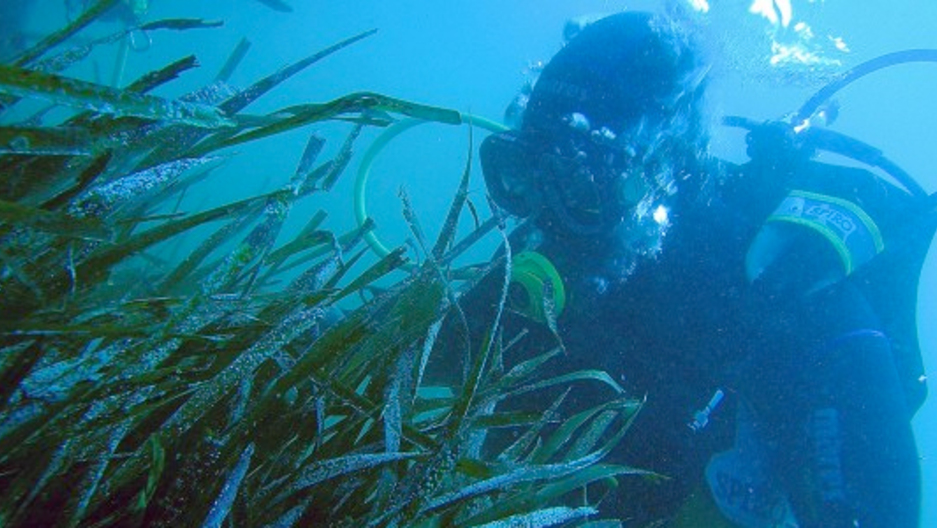 In the waters off Spain's Mediterranean coast, scientists and fishermen are working together to try to save sea grass, which is a key player in the local marine ecosystem. The World's Ari Daniel Shapiro has this story.

A small boat motors away from a dock in L'Estartit, a picture-postcard Spanish town up the coast from Barcelona, heads into a warm breeze rolling off the Mediterranean, and approaches a scrubby island. The boat stops just offshore, and marine biologist Jordi Sanchez slaps on a snorkel and dunks his head underwater.

When he surfaces, he's beaming.

Waving in the water beneath him is a field of Posidonia — a kind of seagrass that grows to a height of about three feet.

Sanchez says the seagrass is just teeming with life. Snorkeling here, he says, is like "flying over a miniature forest."

Sanchez says there are little fish, squid, octopi, urchins, sea stars, and many other marine species thriving in this thicket of seagrass. All of which make Posidonia a key part of the coastal ecology and the local fishing economy.

But Posidonia is slowly disappearing, here and elsewhere. There are many reasons for the decline, but in a place like this, just anchoring a boat can be a problem.

Sanchez says that anchors and their chains tear up the sea floor and destroy the Posidonia. Each anchor, he says, leaves behind a barren, sandy path through the grassy forests. Multiply that by thousands of anchors a year, and you get some idea of the threat.

The problems go well beyond anchors. Warmer water temperatures, coastal development, and pollution are all affecting Posidonia and other seagrass species across the Mediterranean and around the world.

"There is not [a] single location that is devoid of this negative human influence," says Javier Romero, a marine ecologist at the University of Barcelona. "There is not a risk of extinction of sea grasses, but the total amount of sea grasses is reducing progressively."

And that means a reduction in the vital goods and services sea grasses provide, things like food and habitat for countless marine species, protecting shorelines from erosion, and storing carbon.

Estimates of the damage to seagrass beds worldwide vary, but one recent survey put the figure at a nearly 30 percent decline since the 19th century.

The problem is pretty much out of sight because it is all happening underwater. Here in Catalonia, the regional government has taken small steps to address it, but Javier Romero says the scale of the challenge can feel overwhelming. That is why he supports local action — efforts that make a difference to one seagrass ecosystem at a time.

That message of local action resonates with a conservation team working around the Medes Islands. The islands are a protected area, so boats that want to fish or even just moor here have to follow special rules.

Numerous buoys bob up and down in the water around the islands, each one connected to an anchor that has been screwed into the ocean floor. In order to stop here, a vessel has to tie up to one of them. It is like a parking lot for boats, and if no buoys are available, the boat has to come back later.

"It's helping to preserve this habitat," says Manel Gazo, director of Submón, the environmental group that installed the moorings as a model for other communities. "And we are trying to convince local authorities to use this kind of mooring systems."

Gazo and his colleagues are also partnering with local fishermen. The buoys were a tough sell at first, he says, until Submón reframed seagrass protection as a shared goal — saving an ecosystem that the fishermen's livelihoods depend on.

Gazo adds that now many of the fishermen here have become advocates for the seagrass. They watch out for changes in the health of the Posidonia, or for other fishermen harming the seagrass.

"The future is in our hands"

Of course, not all fishermen are happy with these kinds of restrictions, but some, like Miquel Sacanell, are calling for even more.

Sacanell, a fisherman and a biologist, says fishermen are aware of the importance of the seagrass, and that the government needs to understand and prevent the causes of the decline. He wants future generations to continue reaping the rewards of the seagrass.

It is a big challenge, especially with climate change raising the stakes. One recent study found that warmer sea temperatures alone could reduce Posidonia meadows to the point where they are functionally extinct.

But biologist Jordi Sanchez says people in the region must rise to the challenge.

"The future is in our hands," Sanchez says. "We can't lose hope, especially since there's so much more work to be done."

Ari Daniel Shapiro uses Google Earth to explore an ecological face-off in the Mediterranean between the posidonia seagrass and an invasive algae from halfway around the world, in this video from The Encyclopedia of Life.