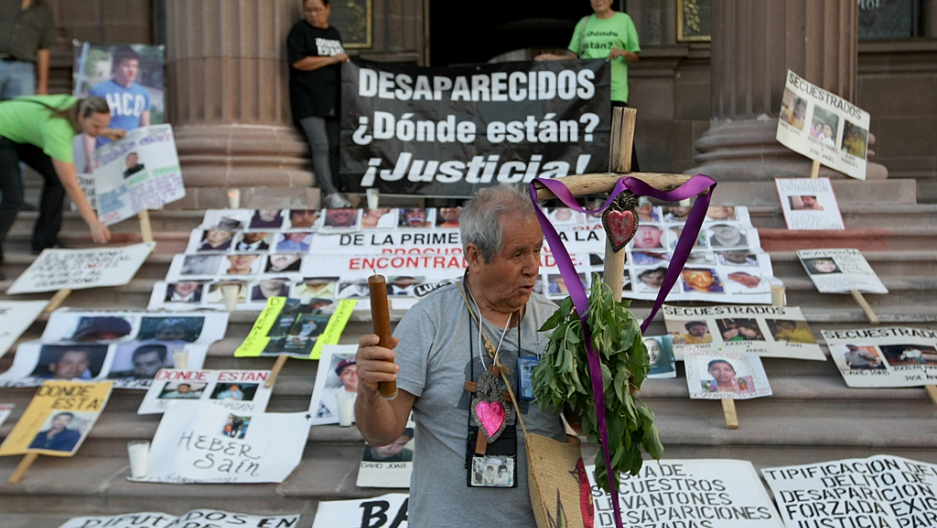 A man who has a missing relative holds a cross and a sign during a protest demanding information on the whereabouts of missing relatives, during the commemoration of the International Day of the Disappeared in Monterrey, Mexico, on Aug. 30, 2012.
Credit: Julio Cesar Aguilar
Share

“You get accustomed to it,” he said.

It’s a task to which he's turned after other options faded for finding the 23-year-old engineering student, also named Rogelio, who disappeared nearly two years ago on a trip near the South Texas border. “You start to assimilate it, little by little.”

Then, asked how the fruitless search has affected himself, his wife and two daughters, 49-year-old's stoicism evaporated in a blink, sobs surging from deep in his chest, tears flowing down cheeks.

“I'm sorry,” he said. “It changes your life completely.”

Mexicans by the tens of thousands — precisely 26,121, by the government's latest tally — have vanished in the six years of criminal hyper-violence that have battered much of the country, especially communities like this one near the US border.

Mexican and international human rights and victims' advocacy groups blame security forces, often working with the gangsters, for many of the disappearances. They point to official inaction for the enduring pain suffered by the families of the missing.

But now under sustained pressure from those groups, President Enrique Peña Nieto's new administration and key state governments have promised to focus on finding the missing and prosecuting their tormentors.

Although victims’ advocates say they’re jaundiced by years of empty promises and useless investigations, some are allowing themselves a measure of optimism.

“We've begun to see the government taking things seriously," said Consuelo Morales, a Roman Catholic nun who directs the advocacy group Citizens in Support of Human Rights, or CADHAC, in Monterrey, capital of the state of Nuevo Leon that borders the United States. It has documented more than 1,000 disappearances in the past four years.

In a report released in February detailing 249 disappearance cases, Human Rights Watch points to newfound interest of state officials in Nuevo Leon and neighboring Coahuila — where at least 1,835 people have been reported missing — an indication that things may be improving.

The state Attorney General's Office in Nuevo Leon has begun investigating 50 cases where evidence is most solid. A state law enacted in December makes forced disappearance a crime punishable by up to 40 years in prison.

“These are very small steps we are achieving,” said Morales, whose organization led the push for the new law. "We can't be satistfied. The problem is not going to disappear."

Sixteen people, most of them local and state police officers, stand accused of forced disappearances in Nuevo Leon. But Morales' group recorded 12 disappearances across Nuevo Leon in January, five of them purportedly at the hands of security forces.

The ongoing vanishings have redoubled advocates' determination to keep the pressure on state and federal officials.

"We don't want another disappeared person,” said Diana Iris, 56, a leading member of Forces United for Our Missing in Coahuila, or FUUNDEC, a Catholic Church-supported collective of relatives searching for more than 200 of the state's missing people. "We don't want to have anyone else to suffer what we are suffering."

The Sunday he disappeared in early May 2011, Rogelio Elizondo's son had driven three hours from Saltillo, the Coahuila state capital, to the border city of Nuevo Laredo to help a friend buy a used van.

Mexico's extreme violence began in Nuevo Laredo in 2004 and the city — which shares the Rio Grande with Laredo, Texas, and serves as the prime land port for bilateral trade — remains a battleground. The vicious Zetas gang, which dominates there, fights rivals from the Sinaloa and Gulf cartels as well as security forces. Street shootouts, executions and disappearances are routine.

The younger Elizondo had called another friend about 11 a.m. that Sunday to tell him the pair had arrived safely. That was the last anyone heard from the two men. It was as if the border had swallowed them whole.

"There wasn't much to do," said the elder Elizondo last week of the frantic search for his son that followed. "We don't have the capacity to investigate."

But for months afterward, the wife of the other missing man continued receiving bills for his cellphone, each showing as much as $800 worth of calls made from Nuevo Laredo and nearby Mexican border cities. Through connections at the cellphone company, she obtained a list of the exact locations from which the calls were made, and turned it over to investigators.

State officials paid the cellphone tab and the calls immediately stopped. There’s no indication, Elizondo said, that police tried to follow up on the location of the calls.

“There has to be someone protecting them," he said of those involved in his son's disappearance. “What else can we think, when the authorities don't tell us anything?"

Like other victims' relatives, Elizondo clings to the possibility that his son still lives — forced to work for the gangsters in some capacity, he thinks, digging mines in the coal country near in the desert north of Saltillo, perhaps, or packaging narcotics for shipment to US consumers.

“Of the missing people, bring me one,” Elizondo said, expressing doubt the new official promises will produce either his son or any of the others who have disappeared. “Bring him dead or in pieces. But bring me one.

“Do something,” he said.