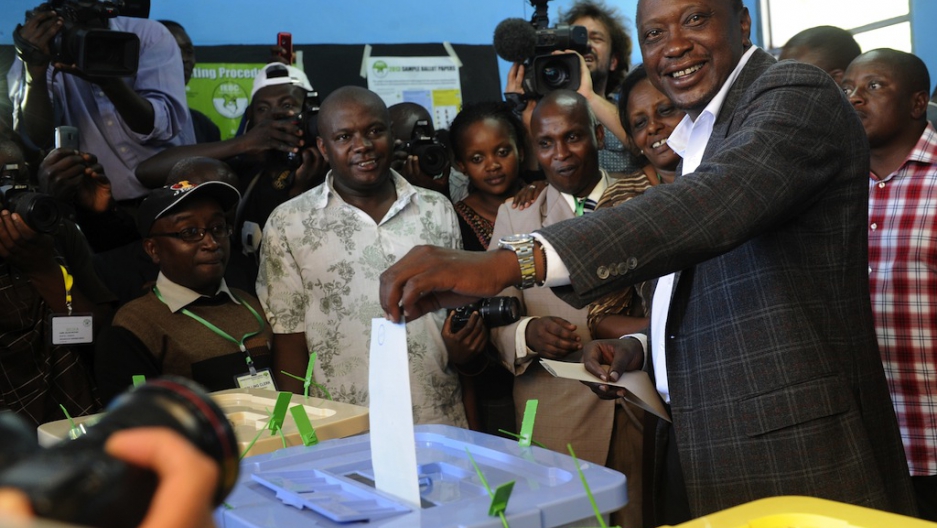 NAIROBI, Kenya — Uhuru Kenyatta took an early lead in Kenya's presidential election on Tuesday with more than a third of total votes counted.

Kenyatta, a son of Kenya's founding president whose name means "Freedom," is ahead with 54 percent of the vote so far. This would be enough to avoid a run-off with his closest challenger, current Prime Minister Raila Odinga. But with 60 percent of the votes still to be counted, Kenyatta's victory is far from assured.

Kenyatta, 51, was born two years before Kenya won independence from Britain. At the time, his father, Jomo Kenyatta, was at the helm. He studied politics and economics at Amherst College in Massachusetts, and has served as finance minister as well as being a current deputy prime minister.

The family name is ubiquitous in Kenya: it is given to roads as well as the main international airport, and Jomo Kenyatta's face appears on all of Kenya's paper currency. The family owns vast tracts of land and Uhuru Kenyatta was recently named by Forbes magazine as the richest man in Kenya with an estimated fortune of $500 million.

The prospect of a Kenyatta victory worries many of Kenya's foreign allies. He has been charged for some of the horrific violence that struck Kenya after the last election in 2007 and has been indicted on charges of crimes against humanity at the International Criminal Court (ICC) in The Hague. His trial is due to start in August, when he will appear alongside his running-mate William Ruto, who has been charged with similar crimes.

Ahead of the election, Johnnie Carson, Obama's top diplomat for Africa, warned Kenyans that "choices have consequences" — comments taken as a poorly veiled reference to Kenyatta's candidacy. European ambassadors — who unlike Carson speak for countries that are signatories to the Rome Statutes that established the International Criminal Court — have similarly warned that diplomatic relations would be threatened by a Kenyatta presidency. It is the policy of ICC member states not to deal with indictees.

Kenyatta is a member of Kenya's largest tribal group, the Kikuyu, who account for roughly one-fifth of the population of 41 million. Following the disputed results of the 2007 elections, Ruto's Kalenjin supporters attacked Kikuyus in the Rift Valley, sparking violence that left more than 1,100 dead. The ICC says Kenyatta organized retaliatory attacks on Kalenjins and their erstwhile political partners, the Luos, represented by Odinga. Kenyatta and Ruto deny the charges and insist they will clear their names in court.

If he becomes president, Kenyatta will join a small, ignominious club of heads of state charged with crimes against humanity at the world court — including Sudan's Omar Bashir. The ICC is notoriously slow and bureaucratic, which means that, in practice, if Kenyatta were president he could well spend much of his term court. Odinga quipped during a televised presidential debate that it would be difficult to "run the country by Skype from The Hague."

There could also be dire consequences for Kenya's growing economy if Western companies are less keen to invest, tourists less likely to visit a country with an ICC indictee for a president and the possibility of sanctions to follow if Kenyatta were to use the position of head of state to attempt to dodge the court, something he has insisted he has no intention of doing.

In the meantime, Kenya's elections officials are urging the public to wait until the vote counting is complete before they react.

"Nobody should celebrate, nobody should complain," election commission chairman Isaac Hassan told journalists. "We therefore continue to appeal for patience from the public."