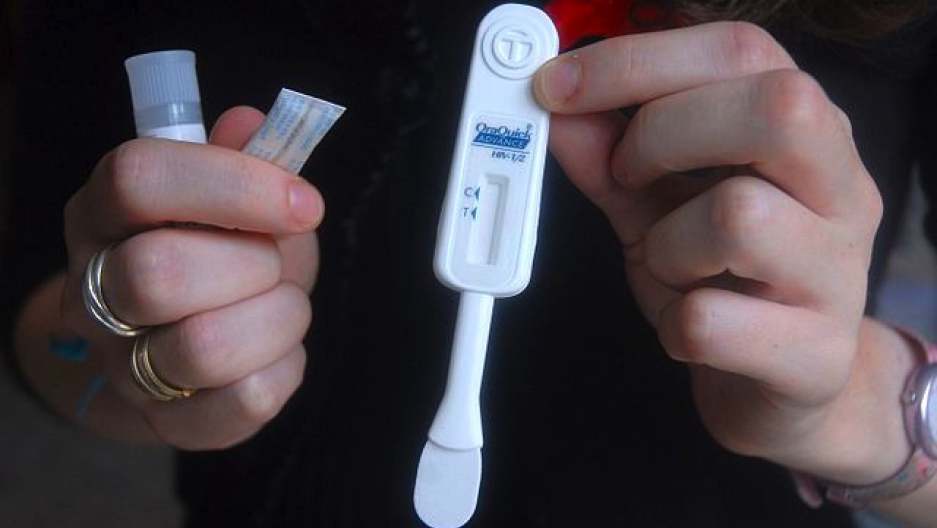 The OraQuick HIV saliva test is a preliminary test that can be done at home. (Photo by Marcello Casal via Wikimedia Commons.)

Doctors in Mississippi are excited about the potential for preventing AIDS after curing an HIV-infected baby born two years ago.

The baby, born  to an HIV-positive mother, was aggressively treated with AIDS medication immediately after birth and is just the second known case of an HIV-infected person later found to be free of the virus. Though the milestone technically represents a cure, doctors are being cautious about this treatment's wider implications.

Kenneth Mayer, medical research director at Fenway Health, says the baby's mother didn't know she was HIV infected until she delivered the child.

"At the time of the delivery, the obstetrician-gynecologist had the presence of mind to think that because the woman had no prenatal services and hadn't had prior exposure to medications, that the infant was likely to be infected," he said.

It takes time to diagnose an HIV infection, Mayer says, but the baby's primary doctor made the decision to immediately start a full treatment regimen with just 30 hours after the baby was born — rather than waiting for test results to confirm the diganosis.

"The baby had shown some antibodies, which take time to develop, but what nailed the diagnosis was doing both RNA and DNA tests using a very sensitive technique called PCR. That suggested that there was active virus inside the child's body at the time of delivery," he said.

The baby is now 2.5 years old and health. But doctors are unsure if this treatment method will be relevant for adults, Mayer said.

There's a theory that adults possess reservoirs of HIV in areas such as the spleen or brain where the HIV infection can hide, which makes it difficult to treat or cure the disease, Mayer said.

"In this case, those reservoirs may not have been fully developed when the baby was infected, so the anti-viral drugs had a better shot at acting against a virus that was more easily accessible," he said.

In another case, an adult was cured of HIV after undergoing a bone marrow transplant. But the donor had a genetic mutation that makes him HIV-resistant — a mutation that is rare, making it difficult to repeat and replicate on a large scale.

The same could be true in this baby's case, Mayer says, but more research needs to be done.

If the baby's mother had been on anti-retroviral medication throughout the pregnancy, there wouldn't have been a case, Mayer said. So, the most important thing in moving forward is for mothers to know their HIV status and take medication to protect their baby from becoming infected.

"Based on this case, I think clinicians should have a low-index of suspicion for testing women whose HIV status is unknown at the time of labor and delivery and trying to have the tools in place to consider providing treatment for those infants that are diagnosed in mothers who didn't have prior obstetric care," he said.

In the past few years, the U.S. has had fewer infants born with HIV because of increased testing, but there are still cases that slip through the system, Mayer said.

"I think there's hope. I think now the question is about how to do this carefully with other infants in similar settings, so as to see, is this a one off kind of phenomenon or is this something that can be more generalized?" he said.