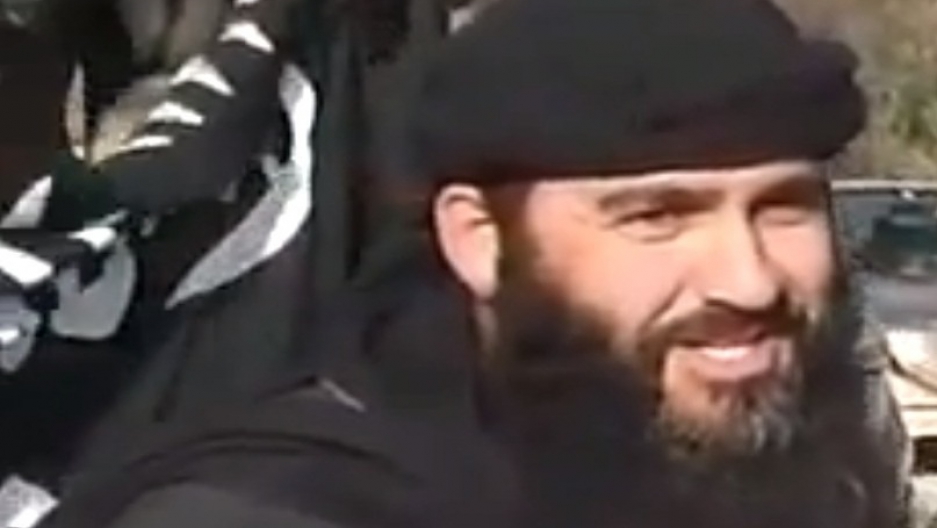 An undated photo of Al-Amir Gazi al-Haj, one of the “princes,” or top leaders, of Jahbat al-Nusra, an Islamist rebel group in Syria the United States has designated a terrorist organization.
Credit: Syrian Institute for Press Care
Share

JABAL AL ZAWIYA, Syria — Officials in Washington and Damascus agree on something, they both call Jabhat al-Nusra a terrorist organization.

The US State Department describes the cadre of rebel fighters as Al Qaeda’s attempt to “hijack the struggles of the Syrian people for its own malign purposes.”

To date, members of al-Nusra have claimed responsibility for more than 600 attacks, which have killed hundreds of Syrians, both military and civilian.

But in rebel-held areas of the country, al-Nusra fighters are hailed as heroes, praised as the opposition’s most effective military force against a government that has leveled whole cities with airstrikes, killing tens of thousands.

More from GlobalPost: In Depth: In Syria, one man's terrorist is another's freedom fighter

In a rare, exclusive interview with GlobalPost, Al-Amir Gazi al-Haj — one of the “princes,” or top leaders, of al-Nusra — defended his organization.

“We only accept the best of the best,” he said from his sparsely furnished home in Jabal al-Zawiya, as he stoked a wood heater. “We have pure intentions. We fight only for Allah. We do not accept even small deviations [from God’s law], like smoking. We walk a straight line and you can see the results.”

Jabhat al-Nusra, or The Support Front, emerged in January 2012 when it claimed responsibility — in a now-removed YouTube video — for a double car bombing in downtown Aleppo.

Since then, it has grown into a large, highly trained fighting force, with several major victories behind it. Al-Nusra has carried out bombings and assassinations deep inside government territory, worrying both their enemy in Damascus and the West.

Hundreds of rebel factions have joined the war since March 2011, when a peaceful protest movement erupted into violence after it was met by overwhelming government force. The various opposition groups now range from secular coalitions fighting for democracy, to local and foreign religious extremists. Al-Nusra is among the most militant. Al-Haj and his men say they are fighting to establish an Islamic state under Sharia law.

Al-Nusra closely safeguards even minor details of their operations. The Quilliam Foundation, a London-based nongovernmental organization that promotes “counter-extremism” and more nuanced policies by the West toward Islam, released a report on the group last month that revealed the extent of Al-Nusra’s secrecy.

“Any breach of the group’s security is punishable by death, supported by a sophisticated religious justification — betrayal of JN is presented as a betrayal of Islam and of all Muslims,” the report said.

Al-Haj refused to even hint at the number of battalions or soldiers they have on the ground or the percentage of foreign fighters among their ranks. But he claimed al-Nusra has representatives in every village in the country.

The Quilliam Foundation estimates its fighters to number about 5,000, with about 2,000 more trainees.

More from GlobalPost: An Australian in Syria: The journey of a foreign fighter

The estimated percentage of foreign fighters within that group is large. But their leaders, like al-Haj, are predominantly Syrian. Al-Haj worked as a construction worker in Idlib province before the uprising.

Al-Haj said he joined the protests in the first days of the revolution. The walls of his house are still covered in soot from the first government assault on his village, when it burned the homes of activists.

As the call to prayer sounded from a nearby mosque, he invited the male visitors to join him before continuing the interview with GlobalPost. He wore army fatigues, an old sweater and a checkered scarf around his head. At 34, his long beard was already streaked with lines of grey. His pleasant demeanor offset the strong, imposing build of this father of six.

Al-Nusra has used almost every terrorist-style tactic to fight the government, including car bombs, suicide attacks, arson, attacks on liquor stores, and — perhaps its biggest strength — assassinations. According to the Quilliam Foundation, al-Nusra carries out three or four assassinations a week.

Al-Haj told GlobalPost that bombings and assassinations play a key role in his organization’s strategy. But he said their operations do not put civilians at risk. Rather, he said the figures on civilian causalities were fabrications made by the Assad administration to discredit the opposition.

“We choose the right time and the right place,” he said. “We watch the target 24/7. Even if one civilian is at risk, we delay the operation.”

He said Jabhat al-Nusra is not just about fighting. “Our mission is to help Syrian people in every way possible,” he said.

Within their ranks, an aid department distributes bread, gas and blankets. It also regulates grocery prices to prevent exploitation of the needy, he said. Among an opposition plagued with accusations of theft, misconduct and corruption, al-Nusra has developed a reputation as disciplined and high-principled.

On Dec. 10, the Obama administration officially deemed al-Nusra a terrorist organization, describing it as an extension of Al Qaeda in Iraq. The move criminalized any private support for the group. Members of al-Nusra have since dodged any questions about its Al Qaeda links in the foreign media. Al-Haj followed suit.

“Why are the US upset about Al Qaeda?” he asked. “Didn’t Hilary Clinton say they are fighting an organization they created?”

Among other opposition leaders, the general belief is that al-Nusra does not have direct links to Al Qaeda, but that much of their ideology stems from the same core beliefs. One of the few outside groups to have worked alongside al-Nusra is Suqur al-Sham, a coalition of moderate Islamists.

“Some of their thinking is similar to Al Qaeda in Iraq. But I do not believe they are financed by Al Qaeda,” said Ayachi Abdel Rahman, a Suqur al-Sham brigade leader who himself stands accused of terrorism. “They have shown a willingness to conform. They have slowly changed their tactics to appease fellow opposition groups and the Syrian population.”

Read the full story: From IT to rebel commander: The story of Ayachi Abdel Rahman

But Abdel Rahman said the two groups have had their disagreements over the killing of prisoners. He recalled a joint mission against a government checkpoint in Idlib where al-Nusra members captured and slit the throats of five government soldiers, throwing their bodies on the roadside. They told Abdel Rahman they wanted to instill fear in their enemy.

While the majority of opposition groups, by policy, send captives to face the centralized Free Syrian Army tribunal, YouTube videos show al-Nusra carrying out executions by gunfire and beheading.

Al-Nusra recently signed agreements in most areas, including Jabal al-Zawiya, to abide by the decisions of the Free Syrian Army courts, including the trial of prisoners of war. But al-Haj said there are situations were prisoners are executed without trial.

“There are some who we are sure have killed many,” he said. “By Islamic law it is an eye for an eye. These executions are by the same law as the courts. The intention of Jabhat al-Nursa is not to kill, but to uphold the law.”

Al-Haj said he was surprised when the United States designated al-Nusra a terrorist organization.

Entering the room to serve a lunchtime feast, Al-Haj’s mother-in-law joined the conversation.

When his wife and young son entered the room, al-Haj beamed a joyous smile. He hugged the boy, who ran giggling into his arms, before warmly inviting his guests to enjoy the meal.

Following the terrorist designation in December, protests broke out across Syria in support of al-Nusra. Signs declared, “We are all Jabhat al-Nusra” and "There is no terrorism in Syria except that of Assad."

“Jabhat al-Nusra  have the Syrian people’s support because they are the only real fighters on the ground,” said Abdullah Omar, a Free Syrian Army member from Aleppo. “The purity of the FSA fighters went down  because they turned from fighting to other illegal work.”

But Omar went on to echo the concerns of many, both civilian and fighters, over the future of Jabhat al-Nusra in a new democratic Syria.

“God only knows what’s going to happen between them and the FSA and the new government after the Assad regime falls down,” he said.