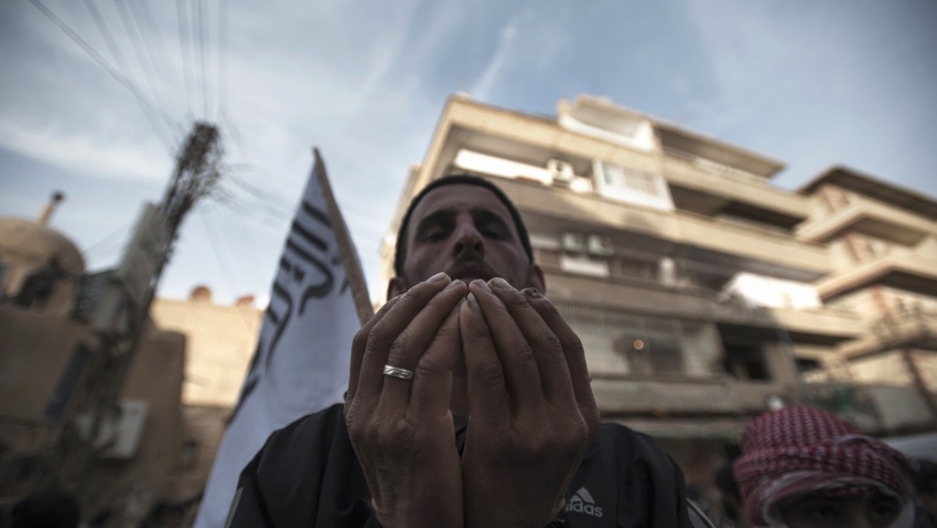 A member of Liwa Hamzah, a newly formed Islamist brigade from the Syrian city of Deir Ezzor, prays at a rally on Feb. 25, 2013.
Credit: Zac Baillie
Share

From the outset of the peaceful uprising that began more than two years ago, to the eruption of violence and civil war that now grips the country, Assad has blamed the unrest on foreign terrorists.

The United States, too, says terrorist groups are operating among the Syrian rebels. The United States has so far resisted sending military aid to the opposition, fearing it could end up in the wrong hands.

But in Syria, one man’s terrorist is another man’s freedom fighter. It’s a vital distinction that, as evidenced by US reluctance to get involved, could influence the outcome of the conflict.

So which is it? Are they really terrorists?

“Today we see an enormous abuse of the term all over the planet,” said Abraham Wagner, senior research scholar at the Arnold A. Saltzman Institute of War and Peace Studies at Columbia University in New York. “It has become politically trendy to label the enemy terrorists as a means of gaining international support.”

In exclusive interviews inside Syria with several senior Islamist rebel commanders — including a leader of the Al Qaeda-linked Jabhat al-Nusra — as well as Syrian civilians familiar with their activity, a more nuanced picture emerged.

Read the full series: Syria: Is this a terrorist?

The Islamist rebels enjoy widespread support among a broad demographic of Syrians. Civilians say the real terrorists are Assad’s army. After all — they are quick to point out — the regime has killed tens of thousands of innocent people for political power. They ask: Is that not the definition of terrorism?

There’s some truth to the claims made by Assad and the United States, however. Hundreds, by some estimates thousands, of foreign fighters — most belonging to Islamist groups — have flooded Syria since the uprising began.

Jabhat al-Nusra, in particular, which is officially labeled a terrorist organization by both Washington and Damascus, is thought to have strong ties to Al Qaeda in Iraq. Al-Nusra has claimed responsibility for major bombings in Aleppo and Damascus, as well as numerous high-profile political assassinations, kidnappings and executions of prisoners.

But Al-Amir Gazi al-Haj, the leader of al-Nusra, told GlobalPost from his home in northern Syria that the group’s attacks are aimed solely at the regime. He said claims of deliberate civilian killings on behalf of his organization are false.

“Our mission is to help the Syrian people in every way possible,” he said.

Read the full story: One on one with the leader of Jabhat al-Nusra

The Syrian uprising began early in 2011 with a peaceful protest movement calling for political reform and the end to a harsh emergency law. But when police and the army met protesters with force, the uprising quickly turned violent.

Within a few months, it took a sectarian turn as the country drew battle lines between the Sunni majority and the minority Alawites, a Shiite sect to which Assad and most government officials belong. The sectarianism was partly fueled by an Alawite mercenary group loyal to the regime, known as the Shabiha, which activists say systematically terrorized anyone suspected of aiding the opposition.

Since then, the number of foreign fighters have grown, pouring over the borders of Turkey, Lebanon and Iraq to fight on opposing sides and for competing reasons. Among the rebels, the ideologies of these groups range from Al Qaeda-style extremism to religious moderates fighting for democracy.

The influx in Islamist fighters worried the West, which — unlike during the Libyan revolution — has resisted intervening.

“International backing gets messy if you can’t identify an opposition you can trust to carry on international interests,” Wagner said. “Yes, Assad is not a good guy, but the alternative may be worse. Better to watch what you ask for.”

Western counterterrorism agencies also worry about the training men like Yousef Topprakaya — an Australian bricklayer who joined the Syrian uprising — may be receiving on Syria's front lines.

Topprakaya's friends and family told GlobalPost he had never picked up a weapon before going to Syria. But in a short time became for the rebels a valuable sniper, and a master bomb-maker.

Read the full story: An Australian in Syria: The journey of a foreign fighter

For Western authorities, the possibility men like Topprakaya could return to Australia, Europe or the United States with such skills is a serious security concern.

Topprakaya, however, was beloved in the northern Syrian village he eventually called home.

“They called him a terrorist,” one of his Syrian friend told GlobalPost. “But a terrorist kills the innocent. He came here to protect the innocent — the children, the weak, the old. The only terrorists in Syria are Bashar and his militias.”

As the conflict enters its third year, Islamic groups are becoming the dominant force of the opposition, celebrated for their discipline and effectiveness in the battlefield. And they make no secret of their desire to turn Syria into an Islamic state, ruled by Sharia law.

But some — like Ayachi Abdel Rahman, a brigade commander with the Islamist group Suqur al-Sham, who GlobalPost also interviewed inside Syria — say they don’t intend to impose their beliefs on the people. Abdel Rahman hopes the people vote for an Islamic form of government through free and fair elections.

“This must be the choice of the people,” he said, sounding decidedly democratic. Abdel Rahman is now facing charges of terrorism in Belgium, something he told GlobalPost he will challenge when his fight in Syria is over.

Read the full story: From IT to rebel commander: The story of Ayachi Abdel Rahman

While the actions and goals of the Islamist fighters in Syria are nuanced, for the West and its Middle East allies, fears of what might replace the Assad government remain high.

So far the international community has — at least officially — largely opted to sit this one out, even as a death toll surges past 70,000 and the number of Syrian refugees surpasses 850,000, straining neighboring countries like Turkey and Jordan.

The continuing stalemate and levels of violence led the United States last week to approve shipments of some non-lethal aid to the rebels. The help falls way short of what rebels had been hoping for, and while it might free up some rebel resources, it’s unclear what long term effect it could have on the conflict.

Is that terrorism? Sebastien Courtoy, Abdel Rahman's lawyer, told a Belgian court last year that it all depends on your perspective.

“Whether someone is a terrorist or a hero simply depends on the geostrategic interests of our country," he said.