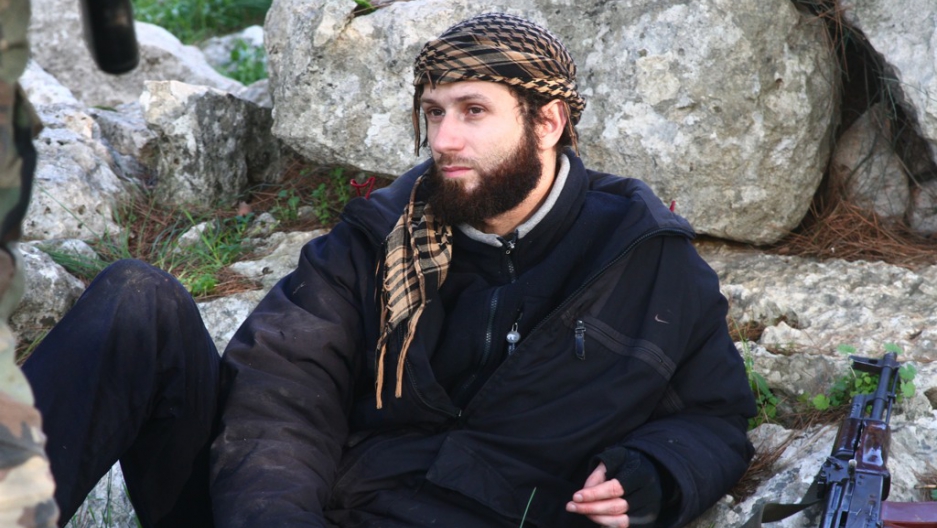 A photo taken in February of Ayachi Abdel Rahman, a brigade commander for Suquar al-Sham, an Islamist rebel group in Syria. Abdel Rahman is facing charges of terrorism in a Belgian court, but he says he is innocent. He is beloved among Syrians, who say he is helping to protect them from the government of President Bashar al-Assad.
Credit: Tracey Shelton
Share

Behind a welcoming smile, he is soft-spoken and articulate. Even with the Islamic headscarf and the AK-47 on his arm, there is something peaceful about his appearance.

The son of a controversial Islamic cleric, 30-year-old Abdel Rahman was born in Saudi Arabia but grew up in France, his mother’s native country. He excelled in web design and ran his own IT company between France, Syria and Belgium before the Syrian conflict began.

“My dream was to expand my company and be a successful businessman. Now I have a company of 600 men, but they are fighters, not computer technicians,” he said, laughing. As he spoke he shared a meal of eggs, humus and falafel with some of his men on the floor of a home they turned into a base near the city of Idlib in northern Syria.

More from GlobalPost: In Syria, one man's terrorist is another's freedom fighter

The Syrian uprising began as a peaceful protest against Syrian President Bashar al-Assad. Almost two years later, it is a largely sectarian civil war, the lines drawn between the Sunni majority and the Alawite minority, a Shiite sect to which the Assad family, and most of Syria’s leaders, belong.

The Syrian opposition too has evolved. What began as a peaceful call for democracy, now includes groups as diverse as Sunni Islamic extremists, defected Syrian troops and democracy activists. Suqur al-Sham, the moderate Islamist group in which Abdel Rahman serves as a brigade commander, falls somewhere in the middle.

Even after nine months of heavy fighting, Abdel Rahman — known to all as Abu Hajar, which means “Father of Hajar,” a reference to his four-year-old daughter — hardly fits the stereotype of a terrorist. But others have labeled him as such.

In June, a Belgian court convicted Abdel Rahman to eight years in prison after he launched several websites on which he expressed his views on Islam, the Israeli government and the true meaning of “jihad.” He faced similar charges in 2009 for a website he created that the Belgium government called anti-semitic. In an appeal, Abu Hajar argued that his statements were against the Israeli government only, not the Jewish people. His sentence was reduced to a fine.

The current charge is in relation to the Centre Islamique Belge, an Islamic center set up in Brussels in the 1990s by Abdel Rahman's father. His father previously served three years of an eight-year sentence in Italy, accused of smuggling Palestinians into Italy and conspiring to commit acts of terrorism, before he was acquitted through an appeal in July last year. Abdel Rahman says the Palestinians were only refugees.

Ironically, even though Abdel Rahman is now, for the first time, actively fighting, there have been no new accusations or charges of terrorism.

"My client is from Syria. He is at this time committing terrorist acts against the regime of President Assad," Courtoy said, according to the Dutch newspaper De Standaard.

The lawyer was trying to make the point that the charges Abdel Rahman faced — of assisting fighters to travel to Iraq — were not in European interests. But fighting the Assad regime is, so no one is bothering him.

“Whether someone is a terrorist or a hero simply depends on the geostrategic interests of our country," Courtoy said at the time.

More from GlobalPost: One on one with the leader of Jahbat al-Nusra

Abdel Rahman said he intends to return to Brussels to defend his name, but now is not the time.

“When I see I have no important work left here, or if I see the Islamic groups fighting among themselves, I will go to defend what they say about me,” he said.

“It is not terrorism to defend your country, whether it is Iraq, Afghanistan, Chechnya, Syria,” he said. “Maybe some have become terrorists later by killing the innocent, but I openly defend anyone’s right to fight for their freedom and the freedom of their children.”

Abdel Rahman said true jihad comes with rules, one of which is not to kill civilians.

He admits that innocent people are killed unintentionally in war all the time. “This is for Allah,” he said.

In Syria, his views have gained Abdel Rahman the respect of his countrymen.

On a recent visit to his base in Syria, as Syrian government broadcasts labeled him and his men terrorists, children playing "rebel fighters" in the street argued over who got to play Abdel Rahman, their local hero.

More from GlobalPost: An Australian in Syria: The journey of a foreign fighter

From the beginning of the revolution, Abdel Rahman used his skills as a web designer to find material and financial support for the fighters of Suqur al-Sham.

During a meeting with GlobalPost in Idlib last May, he explained how he raised donations for weapons and supplies via a worldwide system he had designed online.

While Abdel Rahman said he had little desire to become a leader, his men say his rational thinking and honesty led to his quick rise within the group. In December, he was appointed brigade commander of the five Suqur al-Sham battalions west of Idlib. With no central government, Abdel Rahman has also been tasked with managing civil affairs like policing, distributing aid, and finding water and electricity for the region.

Around here, his word is law. Men come to him for advice and spiritual council. Leaders of other opposition groups follow his military planning. At home, the women chat about him admiringly.

At a visit to the village primary school last week, the children in the playground erupted with cries of “Abu Hajar, Allah Akbar!” as he met a mass of outstretched young hands with a hardy shake.

Abdel Rahman left his own four children, and his Syrian wife, in France. But he understands that most of his fighters don’t have that option.

“It is difficult to fight and take such risks while we think about our children, but we are fighting for them to have a better future, to develop a state where they can live as Muslims with no discrimination and a good quality of life,” he said.

The risks were made apparent in February, when Abdel Rahman was shot in the head during a battle for control of Idlib Central Prison.

He had been leading his men as they swarmed through a blown out wall onto the roof of the prison complex manned by about 50 government soldiers, tanks and highly trained snipers. Although the sniper fire penetrated the back of his head, it took Abdel Rahman just four days to return to battle.

“I felt the bullet hit and I fell down,” he later recalled. “My comrade brother told me to say shahada [the Islamic prayer before death]. I couldn’t speak so I began to say the words in my head. But then I felt I was not finished yet, so I got up and my brothers led me out.”

He was transported to Turkey for treatment, registering in the hospital under a fake name. For two days, he suffered from acute headaches and vomiting. After speaking to a very relieved wife home in France, Abdel Rahman decided to return to the battleground.

The bullet had entered behind his left ear, but he miraculously suffered no permanent damage.

“Just a millimeter to either side and I would be dead,” he said as he showed the exit wound behind his right ear. “But it seems God wrote me a new life.”

What he plans to do with this new life is help Syria build a new regime based on Islamic principles. Despite the potential repercussions of publicly sharing his beliefs, he is open and candid when discussing them.

He speaks, for instance, of his hope to one day establish Sharia law in Syria, an idea that horrifies most non-Muslims.

“In Europe, the punishment is all they see,” he said. “But an Islamic state is not just about the punishment. It can only be applied in the context of a refined Islamic system.”

Abdel Rahman offered the example of the Islamic practice of cutting off the hand of a thief.

"The needs of the people must first be met by the state, and the population must be educated regarding Islam and the law," he said. "In times like this, a man may steal food out of need. But in time, if we can develop a state that fills ALL the needs of the people, this punishment is justified."

Abdel Rahman is also a firm believer in democracy. Although he longs to see an Islamic government in Syria, he says, “This must be the choice of the people." He hopes that through the good conduct and fair dealings of Islamic groups, the people will vote for this form of government.

He already has many believers.

“Many people like the way he thinks and chose to follow him. I am one of those people,” said Mohammed Lakaab, a fighter from Homs who joined Abdel Rahman’s brigade several months ago.

Abdel Rahman, however, has no political ambitions. He’d rather return to his work in IT.

“Politics is best left to those that are better than me, and there are many," he said. "But I will assist them in their work for as long as I am needed."