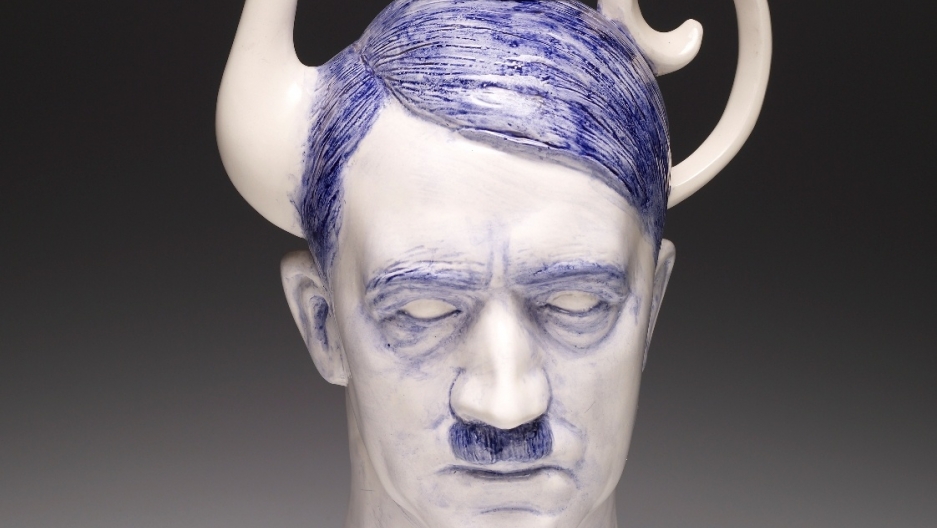 Charles Krafft created this piece, Hitler Idaho (2003), which has some new implications in light of new information that has come to light. (Photo courtesy of Fine Arts Museums of San Francisco.)

A story that broke last month in Seattle’s weekly, The Stranger, got a lot of people in the contemporary art world asking this question about the sculptor and painter Charles Krafft.

Krafft, 65, has been celebrated as a provocateur, making subversive objects modeled after delicate Delft pottery, including a porcelain AK-47 and china teapots in the shape of Hitler’s head. Jen Graves, The Stranger’s visual arts writer, called Krafft “the Northwest’s best iconoclast.”

And the context of his work has always been ironic satire, until now.

Six months ago, an anonymous person emailed Graves asking if Krafft was a Holocaust denier. Graves got in touch with the artist.

"Do you believe Hitler's regime systematically murdered millions of Jews?" she wrote.

He replied: "I don't doubt that Hitler's regime killed a lot of Jews in WWII, but I don't believe they were ever frog marched into homicidal gas chambers and dispatched.”

Graves dug deeper and found a podcast from July 2012 on a website called “The White Network” in which Krafft was a guest. Throughout the two-hour podcast Krafft expresses strong white separatist and anti-Semitic views and at one point simply states, “I believe the Holocaust is a myth.”

“It pretty much turned my head spinning,” said Tim Detweiler, an arts consultant and curator in Seattle.

The revelation of Krafft’s views changes the nature of his artwork, Detweiler said.

“I see a correlation between Kara Walker’s work and Charlie Krafft’s work,” Detweiler said. “Artists that use racial imagery to draw out this darkness into the light — Fred Wilson, Roger Shimomura — they have a special burden that a landscape painter doesn’t really have, where their intention and reasons that they do it really make a big difference.”

But that puts Krafft’s admirers in a bind. Is the art people thought was interesting two months ago, still interesting?

“When you are making an elemental statement about your work, that is, saying one thing politically, and you flip that meaning publicly, then that new interpretation has to be taken into account.” Detweiler said. “At the moment it feels like someone has kicked me in the stomach ... but as museum professionals we have to get some perspective on this and that’s what I hope we can do more and more.”