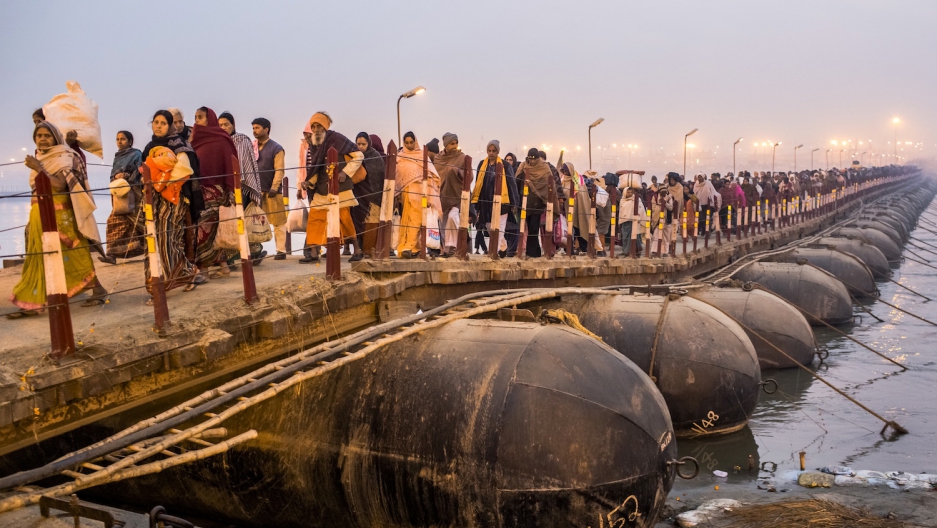 Everybody from Harvard researchers to the World Bank (not to mention the World Hindu Council) found reason for hope at this year's Kumbh Mela in Allahabad, Uttar Pradesh. Here's why their findings just drove me deeper into despair.

As the Financial Times points out, Onno Ruhl, the head of the World Bank in India, observed in Allahabad that the otherwise incompetent authorities of Uttar Pradesh are able to build an efficient "pop-up megacity" every three years for the massive religious festival. This year, for instance, they built a tent city for 2 million people in less than three months, "complete with hard roads, toilets, running water, electricity, food shops, garbage collection and well-manned police stations."  All things that the government has by and large failed to provide the population of its permanent cities, towns and villages over many decades.

Inspiring? To me, not so much.

The conclusion that Ruhl and others draw from this experience is that India is capable of solving its notorious infrastructure problems. But that is self-evident. Anything that America can do, India can do. The issue is not one of ability, but of will. And that's where I get depressed. India CAN solve problems, but it WON'T. And the reason is hidden in the throwaway "explanation" that the bureaucrat in charge of the project gives for its success.

"First, the authorities ensure that all those working on the project are accountable for their actions and the money they spend. Second, those involved are highly motivated," the FT cites Allahabad divisional commissioner Devesh Chaturvedi as saying.

“They feel it’s a real service to all these pilgrims who have come here, the sadhus [holy men] and the seers, so it’s a sort of mission which motivates them to work extra, despite difficult working conditions,” Chaturvedi says.

This is the same non-explanation that I have received time and again when I've visited "success stories" like the cleanup of Surat, Gujarat -- which was inspired by a bout of the plague in 1994 to reinvent itself of one of India's cleanest cities. Things happen because somebody actually cares and takes responsibility. Or, what is the more depressing flip side, apart from an occasional blip on the radar, every public activity in India is a complete and unmitigated failure because nobody cares and everybody would rather, for example, steal from the public distribution system than ensure that starving people get food.

Take the Jaipur Foot, a remarkable low-cost prosthetics project profiled in this month's Forbes India. Again, everybody from Harvard Business School on down has examined the project to see how they've managed to provide prosthetic limbs to 1.3 million people for free. But all they've been able to come up with is that it is the result of the efforts of a single man, a former bureaucrat named Devendra Raj Mehta. And now that he's getting up in years, the very real fear is that the project may well die with him.

That's why I think such studies (including my own article on Surat) don't go far enough. It is useless to conclude that India can succeed where it has always failed when somebody is motivated enough and powerful enough to take control of the project and deliver results. The real issue is why are so few people motivated? What can be done to motivate more people, or to create a sense of collective responsibility? Can anyone name a single instance in which the "great man" or exceptional event like the Kumbh Mela has been replicated or maintained?

Here the tent city for 2 million may be interpreted as a colossal failure, rather than a success: Why are they building it again? Was this the first Kumbh Mela at Allahabad? And what will they do with all that infrastructure after the fact? Will a tent city become a permanent one? I don't think so--any more than I expect that the stadiums built for the 2010 Commonwealth Games in New Delhi will still be in functional shape by the time the city hosts another major sporting event.

I don't have any answers, which is why these things just deepen my despair.

All too often I'm treated to lectures on nationalism or the value of singing the national anthem in cinema halls or the (mostly involuntary) sacrifices of India's "jawans" (soldiers).

But I have to tell you: What I call patriotism looks to be pretty thin on the ground.