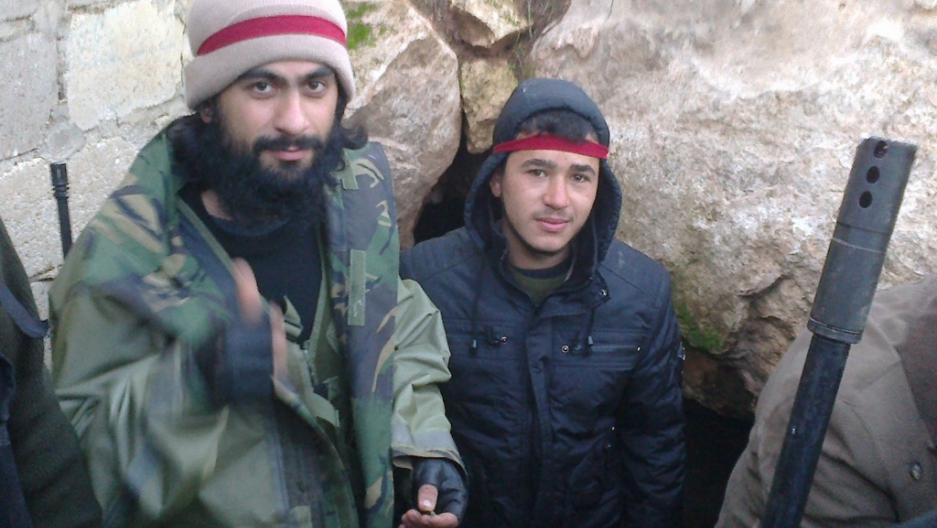 Yusuf Toprakkaya (L), also known as Abu Walid, is an Australian who joined the Syrian rebels. Labeled a terrorist by both the regime of Syrian President Bashar al-Assad and some western security agencies, Toprakkaya was well loved among average Syrians in rebel-held territory. He was killed in battle on Dec. 30.
Credit: Courtesy
Share

MAARAT NUMAN, Syria — In a picturesque village on the outskirts of town, a small crowd of men and children sit on the grass, gathered around a laptop.

On the screen is Abu Walid, a former bricklayer from Melbourne, Australia. In a video, a smiling Walid skillfully mixes explosives. An overlaid graphic reads, “This is Abu Walid, the Australian terrorist — Go to hell!”

The clip the crowd watches is from a Syrian state television broadcast that aired several days after Walid, 30, died during a fight between rebel and regime forces. It was in this village that Walid had made his now infamous instructional video.

Known as Yusuf Toprakkaya back home, Walid was one of more than 100 Australians experts believe have joined the fight against the government of President Bashar al-Assad.

But to villagers here, who have watched in horror as regime airstrikes level nearby Maarat Numan, Walid isn't a terrorist. He’s a hero.

“He was so friendly and kind, so committed to his duties. Honest, humble… the whole village loved him from young to old,” said Abd al-Mundem, 37, who had become the young Australian’s closest friend.

More from GlobalPost: In Depth: In Syria, one man's terrorist is another's freedom fighter

Mundem said Walid arrived in this village nine months ago, declaring his willingness to sacrifice his life to fight for both Islam and the rebels. “He used to sit right there, where you are sitting now, and read the Quran for hours. He never missed a prayer.”

Walid is listed on the US Terrorist Screening Database, according to The Australian newspaper. The paper also cited a US diplomatic cable, released by WikiLeaks, that said Walid had “demonstrated connections” to former Al Qaeda in Yemen leader Anwar al-Awlaki, an American killed in a US airstrike last year.

The exact number of foreign fighters who have taken up arms on either side of the Syrian uprising is unknown. The estimates range from hundreds to thousands. Drawn to a conflict that is becoming increasingly sectarian, the majority of these fighters come from Muslim backgrounds.

In November, the Syrian government presented a list to the UN Security Council of 143 positively identified foreign citizens from 19 countries that died while fighting government troops. Since then the number has risen steadily and countless others have gone unidentified.

Fighters are coming to Syria from countries all over the world — including Lebanon, Iraq, Iran, Libya, Chechnya, Tunisia, Egypt, Australia and Great Britain, to name a few. They are coming for different reasons. Some are fighting for political ends, some for religious, some financial.

Walid came, his friends say, because he couldn’t bear to stand witness any longer to a conflict that was killing tens of thousands.

In an interview at their Melbourne home last month, his mother told the Herald Sun, an Australian daily newspaper, that her son was not a terrorist. She said he went to Syria “to help the innocent people who were being oppressed.”

In Maarat Numan, his Syrian friends echoed that sentiment. They described Walid as a brave and dignified man who loved his family. They recalled his almost daily Skype calls to his fiancé and parents back in Australia.

After watching from afar for more than a year as the Syrian conflict claimed an ever growing number of lives — latest estimates range from between 70,000 to as high as 90,000 — Walid finally left his job and flew to Turkey.

More from GlobalPost: One on one with the leader of Jahbat al-Nusra

Friends say he had no contacts and no plan when he arrived. He wandered around the border between Syria and Turkey until he spotted a group that looked like Syrian rebels. The group agreed to smuggle him into Syria. His Syrian colleagues said he then hitched a ride that brought him to this village, where he met the Saraya el Ashaer brigade.

Among the hundreds of factions of rebel fighters — who range from religious extremists to secular democrats — the Saraya el Ashaer is known to be one of the most secular. Members of the group said they only fought with two foreign fighters, a French citizen who periodically joins them in battle, and Walid.

Those he fought alongside said Walid was intelligent, quickly becoming a faultless sniper despite never before having picked up a weapon. They said he became an expert bomb-maker too, and learned Arabic in a matter of months.

“He could do whatever he set his mind to. He was so smart,” said Abdullah Hassan al Qarsim, a 21-year-old army defector who was with Walid when he died. “He became one of us. He loved this village. He loved the local food. He loved our simple way of life.”

Almost on cue, a cry of joy and a burst of celebratory gunfire spread across the village. “The power just came on,” Qarsim explained, an event that around here only happens once or twice a week.

As the crowd slowly reconvened from the rush of plugging in mobile phones and batteries, Mundem returned with what remained of Walid’s handmade bombs.

Read the full story: From IT to Syrian rebel commander

The explosives ranged from anti-tank mines to hand grenades. He said the group had already used most of Walid’s creations. Mundem now entered each battle with Walid’s personal pack filled with his grenades so the work of his deceased friend could “continue to earn him points in heaven.”

“On every explosive he made he would write, ‘From Abu Walid, To Bashar al-Assad’ as if it was a gift,” Mundem said with a laugh.

He proudly presented one of his favorite examples, a large cylindrical explosive made from a hefty old metal water pipe. A bright orange label was stuck to the center. Written in meticulous Arabic script was the message, “To Bashar the dog, from Abu Walid.”

Affectionately holding his two-year-old daughter, Mundem also described Walid’s softer side. He said he had become part of his family. “He loved the children. They were always in his arms,” he said.

The village children grow excited at the sound of Walid’s name. “He always played football with us and joked with the kids,” said 13-year-old Qasim.

“Abu Walid bought these onions together with me at the market,” said another boy proudly, as he held up a small sack.

The group told one story of how, when returning from battle, Walid had seen the children playing in the street with a tire. He slung his gun over his shoulder and began rolling it along the road, laughing like a kid. “People driving past all thought he was a bit simple,” Qasim laughed.

Walid died in a battle between rebels and government forces for control of the Wadi Dayf military base, on the edge of Maarat Numan.

“He was always out front pushing forward,” said Ahmed Rasheed, 20, a young fighter who now wears the balaclava of Walid in battle. “But this day he had run out of ammunition. He had emptied his M16 rifle and finished his handmade grenades.”

Mundem said he had heard the call for backup but they could not get through the backlines. By the time they arrived, government snipers had shot dead seven men, including Walid.

“They called him a terrorist,” Mundem said. “But a terrorist kills the innocent. He came here to protect the innocent — the children, the weak, the old. The only terrorists in Syria are Bashar and his militias.”

As Walid had requested, he was buried as a martyr near the place where he had fallen.

“This was a special man,” Mundem said, a mix of pride and sadness in his voice. “He left his whole life in Australia and came to die for the rights of our people. We could never pay him back for what he gave us.”