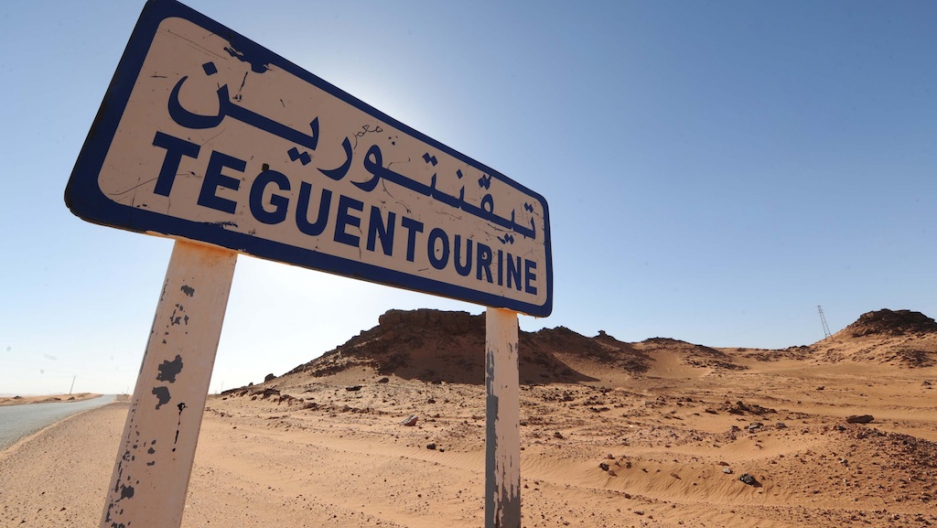 A picture shows a road sign indicating Tiguentourine near In Amenas on a road leading to a gas complex where Islamist gunmen had taken hostages in the desert in Algeria's deep south on January 19, 2013. Islamist gunmen killed seven foreign hostages in Algeria before being gunned down by special forces in a final assault on a remote desert gas complex, state television said, though five members have reportedly been found alive.
Credit: Farouk Batiche
Share

ALGIERS, Algeria — Ali Zawi has been tracking Mokhtar Belmokhtar, the one-eyed, Al Qaeda-linked militant who masterminded the deadly attack on Algeria’s In Amenas gas field in January, since 1995.

Nearly two decades later, Zawi’s hunt — which he started when he was a paramilitary soldier pursuing Islamist militants during Algeria’s civil war — might finally be over.

According to the Chadian army, which is fighting extremist groups with French forces in northern Mali, Belmokhtar was killed there in a firefight on Saturday. Along with fellow countryman and high-level militant, Abdel Hamid Abu Zeid — also reportedly killed last week — Belmokthar’s death would mark the biggest blow to Al Qaeda in the Islamic Maghreb (AQIM) in its history.

The still unconfirmed killings will likely do little to jeopardize an American campaign to put Algeria at the center of its expanding counter-terror operations in the increasingly volatile Sahel region. But the deaths of two of the most high-profile Algerian militants will certainly have implications for the country’s decades-long fight against armed Islamist groups at home.

“The deaths of these two — it doesn’t mean our battle against the terrorists will stop,” said Zawi, who now works as a plainclothes counter-terror agent, and whose region-wide intelligence gathering on Islamist networks is sanctioned by the government. AQIM is the product of an armed Algerian group that sprung up in the 1990s. “There will always be someone there to replace them,” he said.

Both Belmokhtar and Abu Zeid are currently under US government sanctions after vowing attacks against Western interests, including the US. And in the wake of the assault on In Amenas earlier this year, American officials had intensified pressure on Algerian security forces to share intelligence on the transnational militant networks run by Belmokhtar and Abu Zeid and that they see as a growing threat.

Still, even with the two high-profile fighters dead, Algeria has one of the largest and most able armies on the continent — a military force the US believes should be used to battle Sahel-based militants or train other armies in the region.

In exchange, the US is offering the Algerian government access to US-made, high-tech surveillance technology. Former Algerian officials and military officers say it is likely Algeria will allow the US to fly drones over its vast and porous desert border with Mali, where the militants travel unmolested. The US would then pass the information on to their Algerian counterparts.

“It is mostly the Americans that are pushing for this cooperation” with Algerian security forces, said retired Algerian army colonel, Mohamed Chafik Mesbah.

“Right now, the cooperation is quite limited. But they can use our human intelligence — our networks in the field and among the populations,” he said. “And we can use [the Americans’] technology, like the drones.”

Like Zawi, Mesbah says the extremist groups that operate in Mali and even inside Algeria are not yet defeated.

In fact, an internal, AQIM power struggle to replace Belmokhtar and Abu Zeid — who held rival deputy commander positions in the Sahara and Sahel regions — could set-off even more violence.

Belmokhtar reportedly maintained a rivalry with another Al Qaeda commander in Timbuktu, Algerian militant Yahya Abu Al Hammam. Belmokhtar was said to have staged the In Amenas attack to upstage his internal competitors.

“There is a risk that the violence will move in a more permanent way across the border — both in the short-term and in the longterm,” Mesbah said.

It may even reach as far north as Algeria’s Kabilye mountains, the birthplace of the radical Islamist movement that later morphed into AQIM.

AQIM’s emir, Abdel Malek Droukdel, is still based amid Kabilye’s olive groves. Last month, the Algerian army killed 12 of his followers in an operation in the village of Timezrit and that locals say is ongoing.

More from GlobalPost: Al Qaeda in Africa, an in-depth series

Unlike his counterparts in northern Mali, Droukdel remained steadfast in the northern mountains in the face of frequent military assaults.

“In the city, there is good security. Outside, there are bombs on the roads and there are attacks,” said Lamine, a 65-year-old resident of the area’s provincial capital, Boumerdes. He did not want to give his full name.

“The terrorists, they set up checkpoints and people are afraid,” he said. “We don’t know when or from where they are coming.”

If Belmokhtar and Abu Zaid are in fact dead, Droukdel will be tasked with appointing their successors. Al Hammam, Belmokhtar’s rival and newly designated as a terrorist by the US government, is the favorite to be promoted, Zawi says.

“He is very dangerous and he still has the power,” Zawi said of Droukdel. “And Hammam, he is a criminal. With a dirty background.”