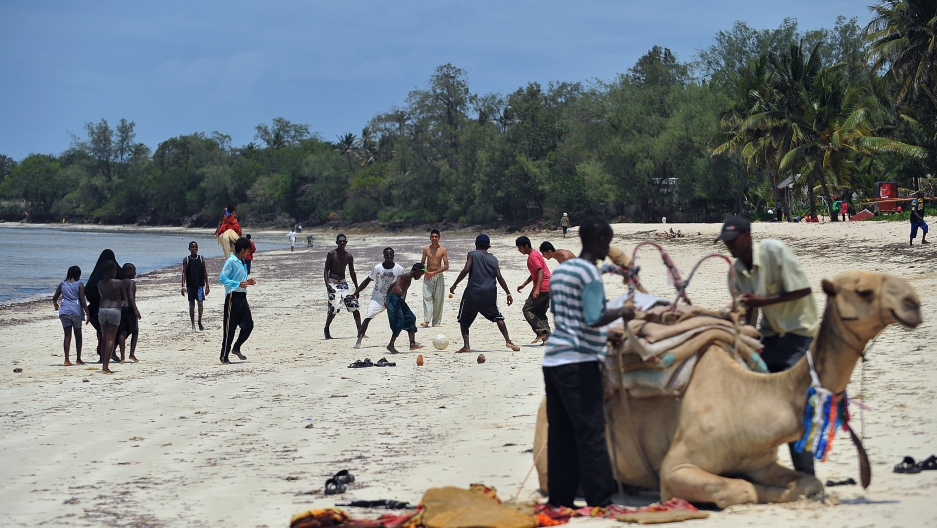 A man prepares his camel for tourists as boys play soccer at the Kenyatta public beach on the Kenyan coast.
Credit: Simon Maina
Share

MOMBASA, Kenya — The ties that bind Kenyans to their state are frequently stretched but in few places are they so close to breaking point as the coast.

Long-standing grievances over land ownership, state neglect and economic marginalization have given rise to voter apathy and secessionist tendencies that critics say shed light on the Kenyan government’s failure to work for its people.

The grievances have over decades driven a wedge between coastal people and the government in the capital of Nairobi. Now, with Monday’s elections approaching, that divide couldn’t be clearer.

Former members of the MRC have told Human Rights Watch that the group’s “military wing” was involved in recent clashes between Orma and Pokomo people in the Tana River Delta. But current members deny such claims, insisting they’re a non-military organization.

MRC demands for coastal independence seem extreme — and likely will never be met — but, in seeking redress for perceived inequalities, they speak for many, even those who do not back calls for secession.

Proof of this lies in their low voter registration numbers for the elections, in which Kenyans will choose a list of political leaders ranging from the president to lawmakers and other local representatives.

The long and thick coastal strip encompasses six of the country’s 47 new counties, yet the electoral commission has registered only 1.1 million voters here, out of 14.4 million nationally.

Government response to the MRC, as with other perceived threats, has been heavy-handed. A dozen MRC members were arrested last week, accused of planning to disrupt Monday’s election. Last year its leadership was arrested, including leader Omar Mwamnuadzi, who was severely beaten during a night raid in which three of his supporters were shot dead by police.

In August 2012, days of deadly religious riots followed the drive-by assassination of Aboud Rogo Mohammed, a firebrand Muslim preacher accused of supporting Somalia’s Al Shabaab. No investigation has been carried out and suspicion has fallen on Kenya’s security forces, notorious for extrajudicial killings.

Few beyond his family and loyal followers mourn Rogo’s passing, but the way he was murdered causes anger.

“Aboud Rogo was very dangerous but why not nab this guy for hate speech, for incitement? That would have been very easy. But they didn’t. He was killed. Why?” asked Khelef Khalifa, executive director of Muslims for Human Rights.

Khalifa pointed to another case, that of Omar Faraj, murdered in October by, he said, police officers who act as cop, judge and executioner rolled into one. “People don’t trust the police at all and the police never seek help from the Muslim community, so every killing is contested,” said Khalifa.

The increasingly adversarial relationship between coast and state is getting worse, but it is not new. “Marginalization has been there since the inception of the Kenyan state. Historical injustices started even before that,” said Khalifa.

When elected officials get their positions through fraud, then use their offices largely for their own benefit; when instead of ensuring citizens’ safety security forces are frequently predatory, and occasionally murderous; when jobs are scarce, education poor and money tight; when complaints of inequality, marginalization and neglect go unanswered for generations — there can be little surprise that many on the coast feel they have no stake in the state, that it has failed them.

“Coastal Kenyans benefit very, very, very little from the Kenyan state,” said Khalifa. He believes it will be “very difficult to fix the relationship between the coast and the government” but says the new constitution — passed in 2010 — offers some hope.

The judiciary has already been overhauled, a new, hopefully trustworthy and independent electoral commission is in charge of polls and police, and land reforms are in the pipeline.

According to the new constitution, voters will choose 47 new county governors and senators as well as members of new county assemblies. The purpose of these changes is to bring government closer to the people and disperse national resources farther from the center.

“This new system of government under the new constitution can repair the relationship [between coast and state],” said Khalifa.

There is a long way to go. Many of those interviewed by GlobalPost complained that top jobs and administrative positions went to “upcountry people.” Lawrence Kinyua, district commissioner of Likoni, is a case in point, but he sees nothing special in the coastal predicament.

“The grievances are there but it is not unlike other parts of the country where there are land issues and lack of employment,” he said. “If they feel neglected they should blame their own local leadership, not the government.”

Rashid Msomali is fed up, disappointed and angry. The 36-year-old one-time dockworker now part-time fisherman spends much of his day sitting in a wooden shelter roofed with palm fronds, gazing out across the Likoni creek toward the urban center of Mombasa Island.

“In its writing the new constitution is very clear but in implementation there is always a hidden agenda,” he said, revealing the deep mistrust that exists between citizen and government. “I don’t think the government can fix anything here,” he said adding that he had not registered and would not vote.

The six other men sitting with him in the beachside shack nodded. They too would boycott the vote.

Another disillusioned with the Kenyan state is Mealii Ali, a 39-year-old mother suffering from diabetes. She lived in an area of Likoni known as Shelly Beach until last month, when “a rich man from upcountry” appeared with a title deed and a bulldozing team to claim her land and demolish her home.

“We ‘Coastarians’ don’t own anything,” she said using a common local descriptor. “In 2007 I voted but now I have no faith,” Ali added.

“I can’t blame those who do not participate in the election. People do not have confidence in the leaders, there is so much apathy,” said Sheikh Khitamy, a bespectacled senior member of the Supreme Council of Muslim Leaders who lives next to a mosque down one of Mombasa Old Town’s narrow cobbled roads.

“Successive government suppressed local people and that has led to a lot of apathy towards elections,” said Lule. “It may seem the MRC has fizzled but the whispers of anger, the tension, is still there and any spark could reignite it.”