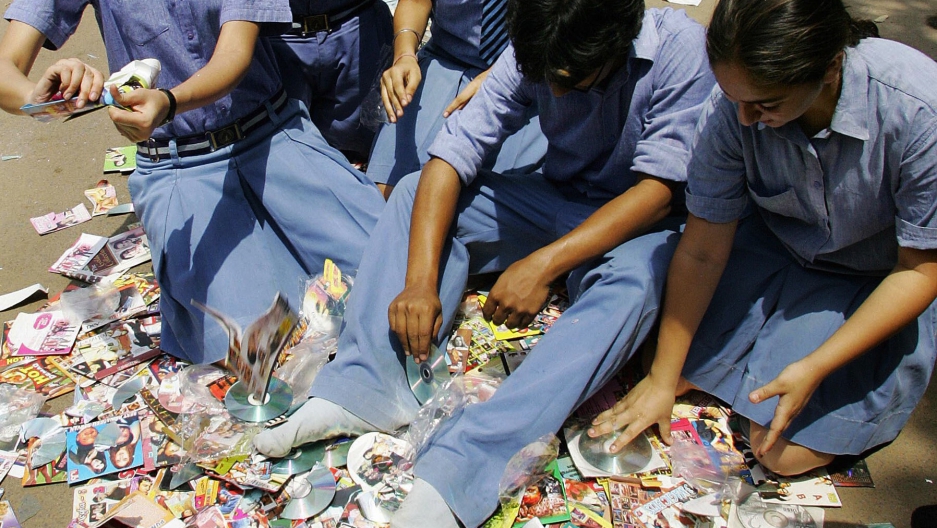 NEW DELHI, India — In an alcove underneath signs for Dell computers, Sandisk storage media and placards advertising printer cartridge repair and refilling, half a dozen boys between 14 and 18 years old have set up shop.

They hold typewritten sheets in their hands, pages and pages long, listing the pirated software they have for sale. And they're not shy about it.

Welcome to Nehru Place, India's largest market for software and computers — and one of the top 30 most notorious hubs of piracy in the world, according to the Office of the US Trade Representative.

According to the Association of Indian Software Companies, this filthy and chaotic cluster of office buildings — each one housing a warren of tiny shops — accounts for as much as half of the $2.5 billion worth of legal software sold in India every year.

But the real volume is in the fake stuff, where the sprawling hub is also responsible for almost 60 percent of the pirated market, including high-end software, operating systems and movies.

That's why a traders' association recently took matters into its own hands.

“Our market gets a bad name because of piracy while not one shop owner is involved,” said Mahinder Aggarwal, president of the All Delhi Computer Traders' Association (ADCTA). “Those hawkers down on the pavement, those 13-, 14-year-old kids, are the ones involved in piracy.”

Earlier this month, members of the ADCTA broke out cellphones and video cameras to catch pirates on tape, posting the evidence on YouTube and providing detailed footage to police that allegedly depicts pirates hawking illegal software, harassing women and abusing drugs.

But they say the police has refused to act, even though their evidence reveals the kingpin of one of the world's largest piracy markets. Maybe that's because the tapes allegedly show cops taking money from the pirates, too.

The Delhi police reportedly never received the complaint, and a spokesman told the Times of India that the police will investigate and “pirates will not be spared.”

But the trade is so open that video evidence is hardly required.

A few hours picking through the outdoor stalls selling off-brand jeans and T-shirts confirms that the police approach the young pirates with little more than a wink and a nod. Every few minutes on a typical Friday afternoon, teams of two or three constables stroll through the stalls.

Juveniles don't have much to fear from police, said one boy selling pirated goods at Nehru Place.

“They're 20 or 30 of us doing this work,” he said, adding that he's been hawking “only pirated” software for the past three years.

He explains in a mix of Hindi and English that the worst that happens to juveniles is a little “dishum, dishum” (the Bollywood-trained ear's slang for the on-screen sound of a character getting slapped around). But “after 19, jail.”

Maybe the police are just tired of running after the boys, only to see them or their replacements back at it the next day. But the owners of legitimate shops are fed up. Not to mention the salesmen.

“It causes a lot of problems,” says Prabhat, a salesman presiding over an empty ground floor shop that sells official versions of the same software that the pirates are hawking right outside his door.

That's an understatement, considering that licensed software costs at least 30 times more than the pirated stuff.