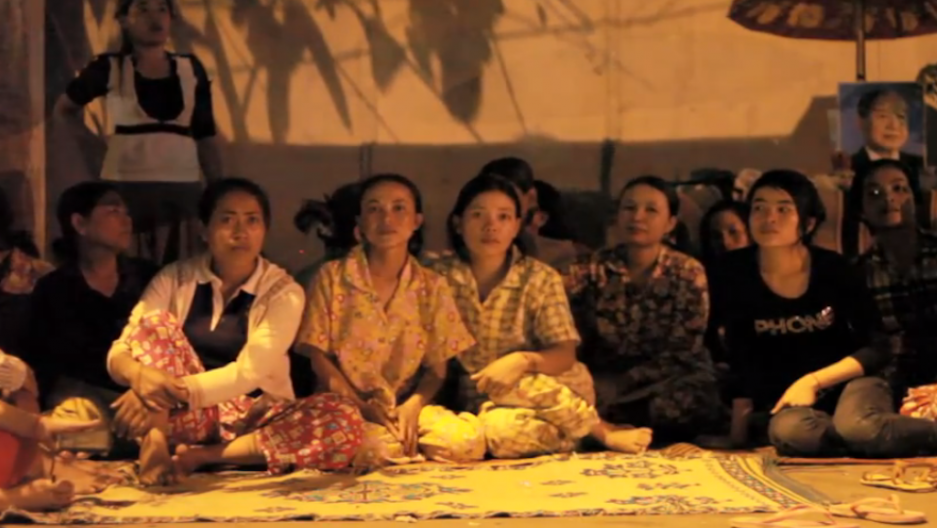 Workers hold a vigil on the sidewalk outside the Kingsland factory in Phnom Penh, Cambodia, where they've been since January demanding severance pay from Wal-Mart and H&M.
Share

After a two-month strike, Cambodian workers from a factory that manufacturing clothing for Walmart and H&M have won a $200,000 settlement they say was owed to them in back wages.

When the Kingsland factory in Phnom Penh closed in January, workers were sent packing without severance, new jobs, or the wages they earned before the shutdown.

Nearly 200 workers have been sleeping in the street 24/7 in front of the factory for the past two months, blocking the removal of sewing machinery, and 82 protesters launched a hunger strike on Feb. 27. Today, demonstrators met with representatives from Walmart and H&M and a settlement was reached, according to Warehouse Workers United, an advocacy organization in California.

“We decided to go on hunger strike to show that we are not workers who can be pushed around,” said 26-year-old Sorn Sothy, one of the protest's leaders, reported LaborNotes.org. “We are strong, committed, and united.”

According to Sothy, in a video released by Voice of Democracy Radio in late January, for four months before the factory closed, the salaries of workers had been chopped by 50 percent, and in December, the wage they were offered was so low, they didn't accept it, in violation of Cambodian labor laws. The owner of the factory then left it closed, without notifying workers of an impending shutdown, and fled the country.

"Workers have no income and no money and our landlords are going to kick us out," she said.

It's a familiar refrain – workers in Cambodia, Bangladesh, and across the Asian market have been facing off against major international retailers and the plight of laborers goes mostly unnoticed until something awful happens (like the recent fire at a factory in Dhaka that produced Walmart clothing).

Meanwhile, the corporations maintained until today that they had no connection to the Kingland factory. Common Dreams reports that both H&M and Walmart denied doing any official business with the Kingsland factory after 2011 and July 2012, respectively. The company also denied connection to the Tazreen factory in Bangladesh, which burned down in November.

However, these workers, some of whom are pregnant, according to a document released by the protesters have devised creative ways to get attention.

The workers sleeping in front of the Kingsland factory found innovative ways to carry out direct actions to bring attention to their cause (such as a two-hour roadblock in front of the building), and they've found support from allies at other garment factories that manufacture Walmart clothing, including workers in the US.

“We are all in the same fight, whether in Cambodia, Bangladesh, America, Mexico, or anywhere else,” said Mike Compton, an Illinois Walmart warehouse worker who won health and safety improvements after a strike last fall, to LaborNotes. “It's time for [Walmart] to take responsibility for conditions in the factories, warehouse, stores, and everything else in their supply chain.”

Labor disputes are a continuous problem in Cambodia. The state department has recorded labor-related 183 protests in 2010, and the International Labor Organization named Cambodia one of the five worst countries facing repression of freedom of association in 2012, because of anti-union laws.

For more of GlobalPost's coverage of labor rights, check out our Special Report "Worked Over: The Global Decline in Labor Rights."