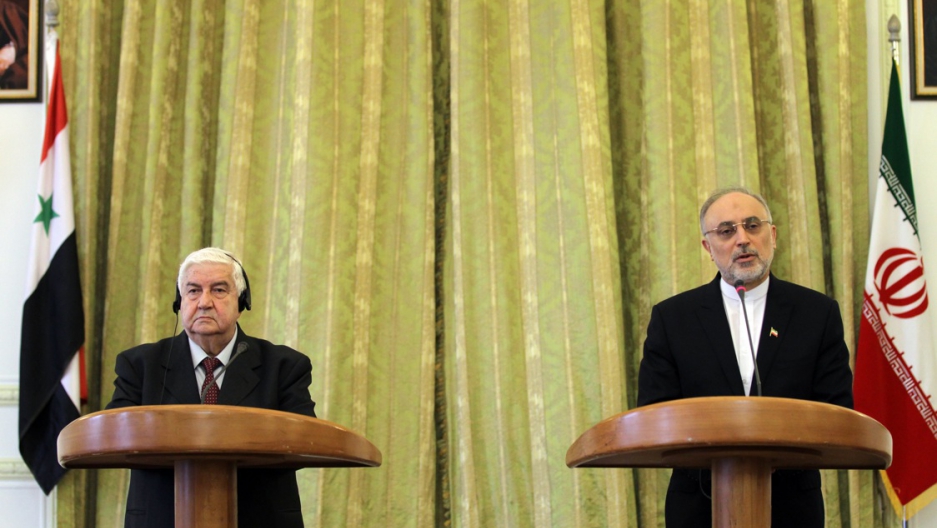 Iranian Foreign Minister Ali Akbar Salehi (R) and his Syrian counterpart Walid Muallem during a press conference on March 2, 2013 in the Iranian capital Tehran. Syria and Iran have accused the US of hypocrisy for offering aid to Syrian rebels.
Credit: ATTA KENARE
Share

Syria and Iran have accused the US of double standards for offering to send aid directly to the rebels fighting to overthrow President Bashar al-Assad.

"I do not understand how the United States can give support to groups that kill the Syrian people," Syrian Foreign Minister Walid al-Moualem told a press conference in Tehran on Saturday.

"This is nothing but a double-standard policy," Reuters quoted him as saying. "One who seeks a political solution does not punish the Syrian people."

Iran's foreign minister, Ali Akbar Salehi, addressed Washington directly: "If you really feel sorry about the ongoing situation in Syria, you should force the opposition to sit at the negotiation table with the Syrian government and put an end to bloodshed. Why do you encourage the opposition to continue these acts of violence?"

The US this week announced plans to double its aid to the Syrian opposition. Secretary of State John Kerry said the new $60-million package would include, for the first time, direct assistance for the Free Syrian Army in the form of food and medical supplies.

Russia's foreign ministry has also criticised the move, which it said would encourage "extremists to take power by force."

Washington has not agreed to give the rebels weapons, in compliance with the international arms embargo on Syria. Some European countries, however, notably the UK, have been pushing for a relaxation of the ban in order to funnel arms and ammunition to Syrian rebels.

The EU this week revised the terms of its embargo to allow "non-lethal military equipment" to pass into Syria, the Guardian reported, while the opposition Syrian National Coalition's UK representative told the paper that he expected some EU nations "to break with Washington and start supplying the Syrian rebels with weapons in the next few months."

"We don't want food and drink and we don't want bandages... The only thing we want is weapons," Salim Idris, head of the Syrian opposition's Supreme Military Council, told the Associated Press in response to Kerry's offer.

More from GlobalPost: Assad 'will take part' in Syria's 2014 election