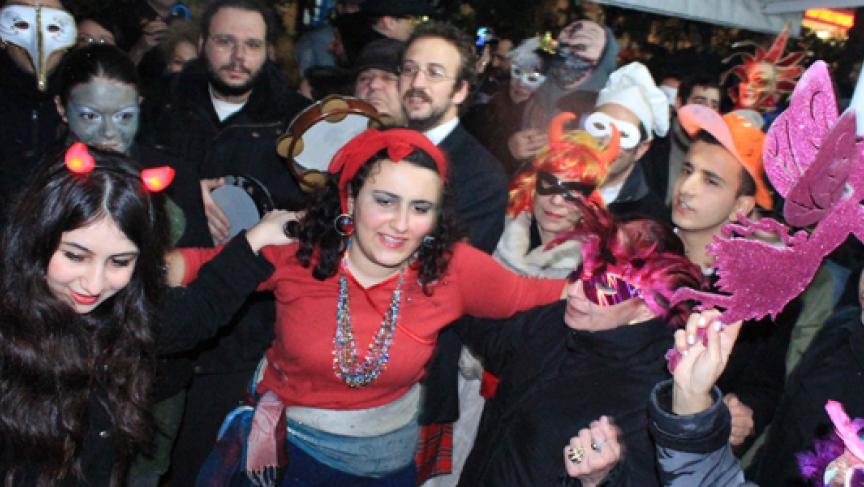 Share
In Istanbul's trendy Cihangir neighborhood, the Smyrna cafe uses the old Greek name for the Turkish city now known as Izmir. With a booming economy and cosmopolitan energy, Istanbul is becoming increasingly attractive for young, educated Greeks like Apostolos Adalialis. Adalialis, who's 25, says he knows the horrors and bitterness of the past, But it doesn't matter anymore. "To me, its doesn't mean anything," says Adalialis. "It's just a country, a neighbor country. I have a lot of friends, Turkish friends, they also have Greek friends. It has completely changed." Istanbul was once Constantinople, the capital of Byzantium, the Greek speaking part of the Roman Empire. And ever since 1453 when the Ottomans conquered the city, Greeks have viewed Turks as their eternal enemy. The Greek-Turkish War of 1922 saw some of the worst violence against civilians the world had ever seen. But the hard feelings are subsiding. Here on Istiklal Street, Istanbul's central pedestrian zone, Greeks and Turks joined together recently in a Greek cultural celebration. Michael Calikusu is a descendent of Constantinople's Greeks. He says that just a few years ago, such a celebration would've been subdued. "There weren't as many Greek students and professionals back then to make a tipping point and make this happen," says Calikusu. "Now there is just some more people, some new people that want to rekindle the traditions and some of customs that used to take place." Turkey's economy is booming — even though it's still a "developing country." Even so, the deepening turmoil next door makes it pretty attractive for some Greeks. "Despite the fact that Turkey is not paradise, it has a huge percent of unemployment, the average salary is really low though the prices are not in a balance with the salaries, it's a solution for me at least, because in June I will be fired," says Thania Vezou, a teacher from northern Greece. "I'm a teacher and I will be fired, so I don't know I don't know next year if i will be working in a school, so it's quite a solution. Beyond the economic calculus made by migrants, Polina Gioltzoglou says Turkey actually offers more cultural comforts than some wealthier European Union countries. "My grand-grandparents used to live here in Asia Minor and I grew up with stories about Turkey," Gioltzoglou says. "Many stories of people being alike and sharing the same neighborhoods and the same traditions. It's like a second home. It's something closer to me than Finland. There are no official numbers but few are expecting a wave of Greeks to wash over Istanbul. Permission to work here is hard to come by and it's still tough to get a good job without speaking fluent Turkish. But the city's buzz is attracting people from around the world, and economic pressure may succeed at opening Greeks' minds about their former enemies next door.