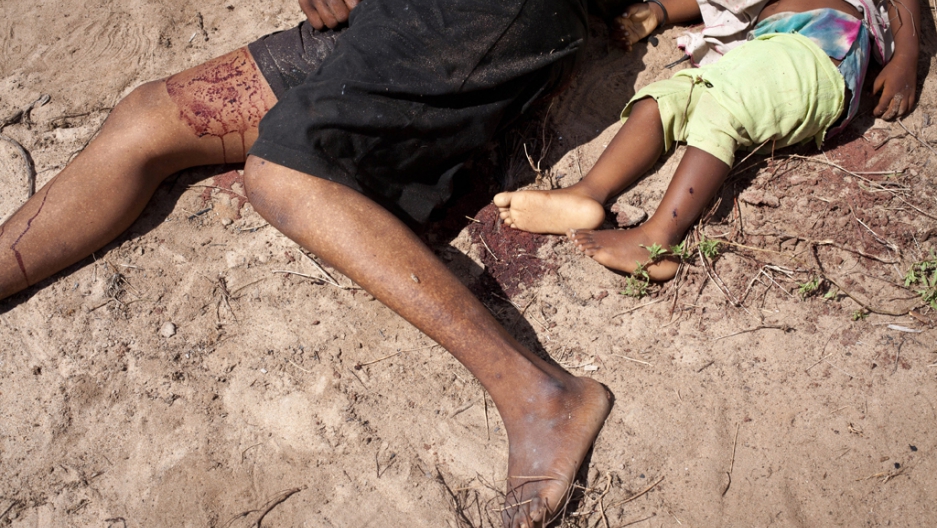 The body of a woman and her daughter lie on the ground following an overnight attack on Jan. 10, 2013 on the village of Kibusu in the Tana river Delta region.
Credit: Ivan Lieman
Share

TANA RIVER DELTA, Kenya — The first attacks began a year ago, pitting semi-nomadic Orma cattle herders against Pokomo maize farmers. There were a handful of deaths but nothing out of the ordinary in this baking hot corner of Kenya, where competition for that most precious resource — water — is fierce.

The government did nothing as the ferocity and body counts of the tit-for-tat raids escalated: six dead in August, 54 a few weeks later, then 11, then 39 (including nine police officers). Finally the authorities stepped in, a curfew was imposed and the raids stopped, for a while.

The toll is now more than 180, according to human rights groups. During the attacks women and children — some just babies — have been disproportionately targeted.

One thing the warring Orma and Pokomo agree on is that politics is behind the extreme violence, as the country prepares for an election Monday. Kenyans are still recovering from a violent election five years ago.

“The way children and women are being killed with pangas [machetes] and arrows,” said Ismael Karafu, an Orma businessman, despairingly, “it comes because of the fight for political power.”

Karafu lives in Oda, a once-mixed town where now Pokomo houses and shops are boarded up and padlocked.

In Kibusu, a Pokomo village, Jared Komora said, “Every time there is an election these things happen.”

Kenyans go to the polls on Monday to choose a new leader for the first time since 2007, when 1,100 people died as political violence executed along tribal lines tore across the country.

Tribe and politics have been inseparable in Kenya since the first multi-party elections in 1992. “There is no politics in Kenya, just tribalism,” is a common refrain, but to describe the killings as simply “tribal” is to ignore the all-important political motivations.

“The animosity is not atavistic, it is intensely political,” said human rights activist and political analyst Maina Kiai, executive director of InformAction, a nonprofit working for political and social accountability in Kenya.

A new constitution, voted for in a 2010 referendum, holds the promise of reform but progress has been slow and it's had some unexpectedly dangerous side effects, thrown into stark relief in the Tana River Delta just a couple of hours north of Kenya’s popular tourist beaches.

In an attempt to devolve power from the center, thereby diluting the zero-sum game of Kenya’s presidential politics, 47 new administrative areas have been created with 47 new governors, each of whom will wield immense power locally. But as power is distributed so too is political competition. “Instead of one president, now we have 47,” said Komoro.

Politicians at every level and in every part of the country know that their prime constituency is their own tribe.

“In Kenyan politics you start with the known and move to the unknown,” is how a politician in the Rift Valley town of Naivasha put it. The way of crude politics is to ensure your tribe is in the majority, so in Tana River Delta the violent competition to ensure their man gets the governorship looks awfully like ethnic cleansing.

“The attacks are to displace people so they are not able to vote,” said Karafu. He sent his wife and three children to Mombasa for safety but has insisted she return in time to vote on Monday. “This time, this vote, it is do or die,” he said.

To talk to people in Pokomo villages is to hold up a mirror: everything is the same, but reversed.

“They want to reduce the number of Pokomo and so win the election,” said Simei Limu, whose 17-year-old son Enok was shot dead in the raid on Kibusu earlier this month.

One politician was arrested and charged with inciting violence but was later released due to lack of evidence. The conclusions of a judicial commission set up to investigate political links to the violence have not been published after the judge was carjacked in Nairobi and her laptop — containing the final report — was stolen.

Meanwhile, it is civilians who suffer, the old and young alike. Dhado Kone, a 71-year-old Orma, lost his right eye when he was struck three times by a machete-wielding Pokomo man during a dawn raid on the Orma village of Kipao in January. Six members of his extended family were killed, including four children between 1 and 5. Out of 31 dead in Kipao, 16 were children.

Dozens more were injured, among them an 8-month-old baby with a machete scar like a bright pink millipede crawling across her dark skin and 52-year-old Boba Wachu, whose left hand was severed entirely.

In Kibusu, Pokomos had their homes burned and their sons and daughters shot dead in a suspected revenge attack earlier this month.

With elections on Monday bringing political competition to a head, many here expect the raiding, and the killing, to continue. “Grazing, water and farmlands cause war but not this time, this time it is purely political,” said Karafu.