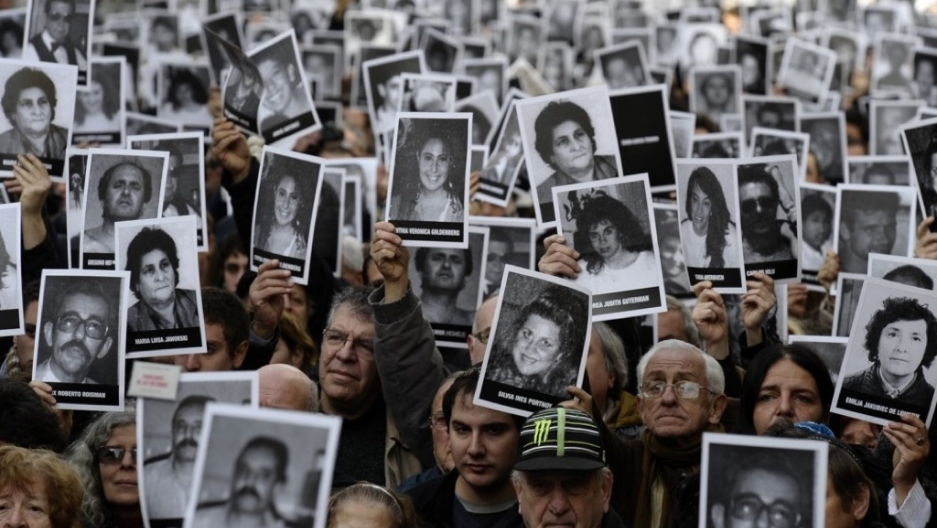 People hold portraits of victims of the terrorist bombing attack against the Argentine-Israeli Mutual Society (AMIA) institute that killed 85 people and injured 300, during the commemoration of its 18th anniversary, in Buenos Aires on July 18, 2012.
Credit: ALEJANDRO PAGNI
Share

Eighty-five people were killed and hundreds injured in the 1994 attack, when a van loaded with 600 pounds of fertilizer detonated in front of the Argentine-Israelite Mutual Society (AMIA by its Spanish initials).

Prosecutors long ago blamed Iran. At 200,000, Argentina’s Jewish community is the largest in Latin America and the region’s most obvious target for anti-Jewish terrorism.

Yet Tehran denies any involvement and refuses to allow investigators to interrogate suspected members of its security services — including Ahmad Vahidi, currently Iran’s defense minister.

Now, despite the impasse, the latest effort by Argentina President Cristina Fernandez de Kirchner to get to the bottom of the mass murder mystery has triggered widespread outrage.

Her foreign minister, Hector Timerman, has negotiated a bilateral agreement with Tehran to set up a “truth commission” to break through 18 years of investigative dead-ends and definitively establish what role, if any, Iran played in the atrocity.

According to the Spanish-language version of the agreement posted online by Argentina, the commission will be made up of internationally recognized legal experts — who must come from third countries — to review evidence submitted by both nations and make recommendations on how to advance the case.

Crucially, it also stipulates investigators can interrogate the five Iranians, who include Vahidi, subject to global police force Interpol’s red notice, in the presence of the commission.

Yet critics from Buenos Aires to Tel Aviv say the agreement pulls the rug from under the Argentine investigation and liken it to allowing an accused murderer to run his own trial.

She added that the deal appeared intended to move Argentina closer to the administration of Venezuela’s ailing President Hugo Chavez, which has forged a strategic alliance with international pariah Iran.

“It is an ideological and geopolitical decision,” Bullrich said. “It makes no political sense here in Argentina. It is a disgrace and will damage this government politically.”

In a carefully worded statement, the Argentine-Israeli Mutual Society concurred that the agreement undermined rule of law in Argentina, noting: “In all this time [the Iranian authorities] have never shown any intention of collaborating with the investigation.”

And Israeli Foreign Ministry spokesman Yigal Palmor told GlobalPost’s senior correspondent in Israel, Noga Tarnopolsky, that Buenos Aires had committed a “breach of trust towards Israel,” whose embassy in Argentina was also bombed, in 1992, killing 29 and injuring more than 200 others.

Like the AMIA atrocity, no one has ever been brought to justice for the embassy attack, although pro-Iranian group Islamic Jihad claimed responsibility, saying it was in revenge for Israel’s assassination of a Hezbollah leader.

The agreement was approved by the Argentine senate on Feb. 21, and the lower chamber passed it Wednesday.

Yet the furor surrounding it has only intensified after the Iranian government — beset by infighting — backtracked on the key clause, allowing Argentine investigators to interrogate Iranian officials, including Vahidi.

"The matter of questioning of some of the Iranian officials is a sheer lie. It seems that those who are concerned by the actual agreement are spreading such reports," Iranian Foreign Ministry spokesman Ramin Mehmanparast said, according to Agence France-Presse.

That appeared to undercut both Timerman, who’s himself of Jewish ancestry, and Fernandez de Kirchner’s defense of the deal.

When it was first announced, the former said that Vahidi, as well as the other suspects, would be available for questioning by a judge, as required under the Argentine legal system.

“I assured myself that [Vahidi] does have to be present when a judge interrogates him, and he will be,” Timerman said.

Meanwhile, Fernandez de Kirchner also offered a characteristically strong dismissal of her critics, including noting it was Argentines rather than Israelis who had died in the AMIA horror.

“We have taken a very important step towards unblocking a case that has been absolutely immobilized for 19 years,” she said during a televised speech. “If the accused are from Iran, with whom do [the agreement’s critics] want us to negotiate?”

The president’s reasoning has received some influential backing, including from the Argentine branch of Amnesty International, which described the bilateral agreement as an “opportunity to reactivate the legal case.”

Yet many wonder why Fernandez de Kirchner might take a step that most AMIA victims, including bereaved relatives, forcefully reject.

“Maybe she wants to be able to say that she has achieved something that no other Argentine government could,” Argentine radio journalist Pepe Eliaschev, who has campaigned on behalf of the AMIA victims, told GlobalPost.

In 2011, Eliaschev clashed ferociously with Timerman, who attacked him as a “pseudo- journalist” for reporting that the foreign minister was secretly negotiating with Tehran over the AMIA case — a story that now turns out to be true.

But Eliaschev also noted how Fernandez de Kirchner and her late husband Nestor Kirchner, who was president before her, have often used foreign relations to avoid facing up to domestic problems, such as runaway inflation. Critics agree that Argentina’s dispute with the UK over the Falkland Islands is a case in point.

“It is a trademark of Kirchnerist diplomacy — which is anything but diplomatic — to use international issues to arouse nationalist sentiment and distract from the domestic agenda,” he said.

Now, with Tehran apparently at war with itself over the deal, only time will tell if Timerman’s claim that Buenos Aires has nothing to lose by cutting this controversial deal will prove true.