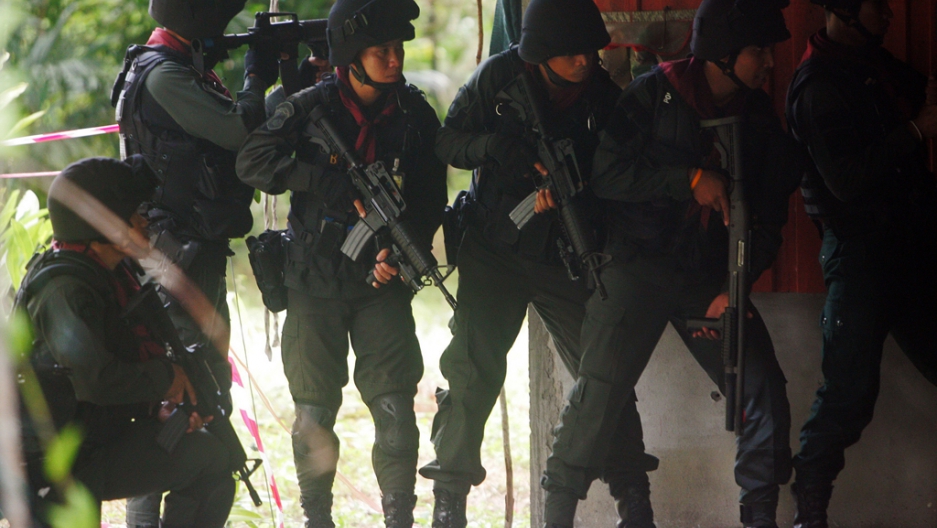 Thai police stand guard during a suspected insurgents attack at a military base in Thailand's restive southern province of Narathiwat on February, 13, 2013. The Thai government agreed on February 28, 2013 to peace talks with Muslim rebels operating in the south.
Credit: AFP
Share

BANGKOK, Thailand — The Thai government has agreed to hold peace talks with a Muslim rebel group next month.

The talks would address a conflict in the country's south that has claimed 5,000 lives since 2004. Members of the group Barisan Revolusi Nasional (BRN) and senior Thai officials signed an agreement to talks in the Malaysian capital of Kuala Lampur, Reuter reported.

Lt. General Paradon Phatthanatabutr, the head of Thailand's National Security Council, told CNN that "a general consensus on the peace dialogue process" had been agreed to with BRN's leader Hassan Taib.

"It is a good start, at least we can now talk," Paradon said. "It will certainly open doors to those who don't always share the extreme ideology to come out and start talking with us. Then we can build understanding with each other."

The predominantly Muslim provinces in the south resisted Bangkok's rule for decades until their violence escalated in 2004.

The men fighting to liberate a chunk of Thailand's deep south and proclaim a new Islamic sultanate are often described as faceless ghosts. Although their campaign claims lives occur just a few hours' drive from heavily touristed seaside playgrounds, little is publicly known about the insurgency's masterminds.

Thais have been surprised by the announcement that an influential separatist network has agreed to sit down with its declared enemy, the Thai state, to begin negotiating peace. Although erroneously reported in many outlets as the "first ever" peace talks, the planned sit-downs are nevertheless highly significant. Past so-called "peace talks" have been conducted in secrecy and with men of little influence.

These semi-public talks will be with a  network believed to coordinate a large share of the roadside bombings and shootings that have terrorized parts of Thailand, according to Thai Rath, the nation's largest newspaper.

One of the original separatist groups, Patani United Liberation Organization, welcomed the negotiations in a statement and hinted strongly at a desire to join in. "So long as the government comes with a sincere and legitimately mandated delegation," the group stated, "we will reciprocate by appointing legitimate representatives to engage in a sincere dialogue for peace."

Although far from assured, a taming of the violence would please the United States, which has aided Thailand's struggle at arm's length. A State Department representative confirmed to GlobalPost in 2011 that Washington provides anti-terror training and counsel to the Thais but won't deploy troops to avoid "inviting trans-national global terrorism." The conflict, which brings killings at a daily clip, has given rise to all-Buddhist vigilante squads armed with shotguns and turned Buddhist temples, where monks are targeted by insurgents, into military-occupied fortresses.

Talks between the government and the separatists are set to begin in two weeks, with Malaysia acting as a mediator.

An attack on a Thai marine base earlier this month left 16 insurgents dead.