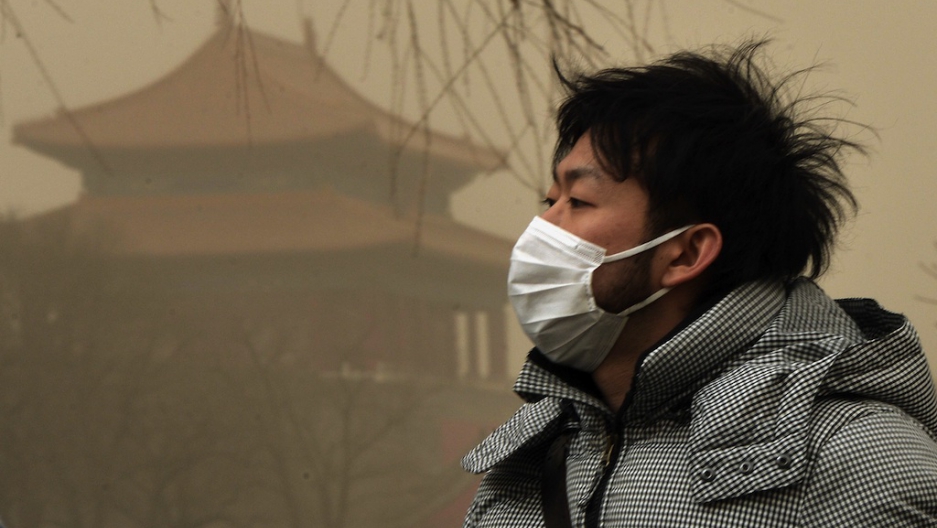 A Chinese man wears a facemask as Beijing is hit by a sandstorm as well as air quality worse than the highest classification of 'hazardous' on February 28, 2013.
Credit: MARK RALSTON
Share

HONG KONG — Residents here woke to a yellow sky Thursday as a mix of dust, smog and sand filled the air in the city and parts of northern China.

A sandstorm with high winds is reportedly to blame for the suddening worsening of air quality, reports say. Flights from Beijing International Airport were canceled and service on high-speed trains suspended due to a lack of visibility.

Beijing has a long history of high air pollution levels. But the US embassy warned that Wednesday's levels were literally off the charts: pollution levels were recorded at 516 "PM 2.5" particles — small particles that can lodge easily in the lungs through inhalation — on an index that officially caps at 500. The city government rated the air quality as "severely polluted," CBS News said.

Bloomberg reported that municipal government and state media urged citizens to stay indoors or wear a mask when going outdoors.

The brunt of the pollution hit during the morning, and by mid-afternoon strong winds had pushed much of the dust and cloud cover from the city, NBC News explained.

The hazardous air conditions come just days before the opening of the National People’s Congress on March 5, drawing renewed attention to the country's environmental problems.

The pollution is especially dangerous for children. With a sense in Beijing that the pollution is reaching a breaking point, many longtime expats raising families said they are sending out resumés and preparing to leave.

"This winter’s sustained smog siege is the worst I have seen it in the eight winters in a row I have spent here," says Beijing analyst and writer Bill Bishop. " Something more than just emissions levels — weather patterns perhaps — must have changed."

They say the good news is Chinese media is talking about the problem openly for the first time. China's National Committee for Terms in Science and Technology is now looking for a Chinese term for "PM2.5," which hasn't existed because it wasn't talked about.

Chinese social media has been exploding, with many sharing a photo of basketball star Yao Ming wincing as he exits his hotel into the toxic air.

The pollution began to clear later in the day. Although it  was partly caused by a sandstorm, that event was itself a product of pollution: during the last decade, the grasslands of Inner Mongolia have desertified due to over-farming, which has drastically increased the severity of sandstorms across the region.