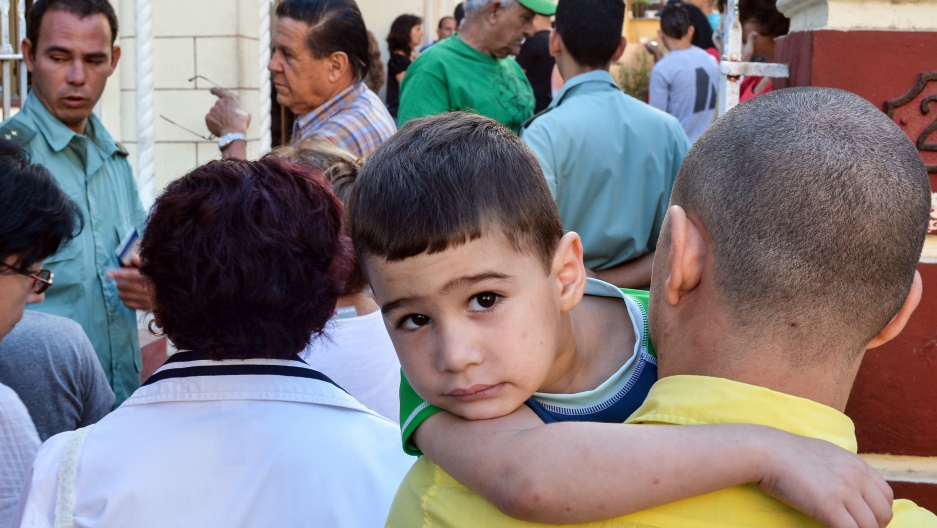 Change in the air? Cubans wait to apply for passports after a new law in January allowed them to travel abroad without exit visas.
Credit: Adalberto Roque
Share

HAVANA, Cuba — Opportunities for a reset in relations between the United States and Cuba do not come along very often. When they do, they tend to disappoint.

But as President Barack Obama and his Cuban counterpart Raul Castro embark on their final terms in office, advocates for normalizing relations say a new, if narrow, window has opened.

Obama’s re-election and his appointment of John Kerry as secretary of state presents Cuba with two of the least-hostile American leaders it has faced in 50 years. Eyeing their legacies, both men want to do something about Cuba, congressional sources say.

In Raul Castro, they have a possible interlocutor who is a no-nonsense pragmatist moving to hand over power to younger leaders, but who retains the unchallenged authority to enact some of the reforms the United States would like to see.

Castro has repeatedly said he is willing to discuss any issue with American leaders as long as it's in a negotiation of equals rather than a capitulation.

Better to begin repairing the relationship while he is still in office, the thinking goes, in case he is followed by a weak successor or a power struggle.

Members of a high-level congressional delegation who met with Castro last week said their aim was to restart conversations between the two longtime foes.

“I feel change is in the air,” said Rep. Jim McGovern, D-Mass., a veteran proponent of reconciliation with Havana. “To me, this is the moment. We have President Obama, Secretary of State Kerry, and my hope is that they will take some risks and end this last relic of the Cold War.”

But the window may not be open long: Castro will be 82 in June and US politicians will soon be distracted by campaigning for congressional elections next year.

The delegation of five US senators led by Sen. Patrick Leahy, D-Vt., said it wanted to develop a “framework” for improved relations. Leahy, who said he spoke to Obama about Cuba extensively before his trip, told reporters on his return that diplomatic progress would require “give and take” with the Castro government.

The US agenda includes the case of Alan Gross, a 63-year-old former American subcontractor jailed in Cuba since 2009. He is serving a 15-year prison sentence for trying to set up illegal communications networks on the island.

Leahy and other US lawmakers have told the Cuban authorities no talks are possible before Gross’s release. But Havana has been trying to use him as a bargaining chip it hopes to exchange for five Cuban intelligence agents arrested in the United States.

Members of the congressional delegation described a five-for-one trade for Gross as unrealistic, but said Castro could get a deal if he lowers his asking price.

One of the five Cuban agents, Rene Gonzalez, is already out of prison on parole. Another, Fernando Gonzalez, is scheduled to be released next February. Both could be pardoned and expelled to Cuba “with minimal political cost” for Obama, a congressional aide said.

Although it's unclear whether Havana would lower its demands, Carlos Alzugaray, a former Cuban ambassador to the European Union and an expert on US relations, said the government isn't likely to compromise.

“I do not think Cuba will release Gross unless it gets the Five,” he said. “Politically it is impossible for the Cuban government to release Gross without getting them.”

“The sooner the US government realizes that, the better,” he added.

Breaking the logjam over Gross could set into motion a series of moves on both sides, analysts say, even if Washington’s long-standing trade embargo remains intact.

The Obama administration could ease US travel to Cuba and authorize American credit card and insurance companies to provide financial services.

Havana, for its part, could generate American goodwill by stepping up reforms and removing restrictions against the private sector. After his recent decision to ease travel restrictions proved popular, Castro could also open internet access to the general public.

Although such steps may appear obvious, they’re not necessarily achievable. The history of US-Cuba tensions is rife with deflated optimism: Modest improvements in relations during the Carter and Clinton administrations suffered setbacks when new sources of tension arose.

More From GlobalPost: End of the Castro Era

However, Ray Walser, a Latin America analyst at the Heritage Foundation in Washington, believes Cuba’s incentives may be greater this time. “With the clock ticking, age running against the Castro brothers, Venezuela uncertain, and no clear succession,” he said, “I presume the Cuban regime wants reasonably good relations with the United States to ensure a soft landing for a succession to the post-Castro regime.”

The largest obstacle, he said, remains the nature of Cuba's political system, and Castro has made clear that’s not up for negotiation.

“Given their commitment to preserving a one-party, totalitarian state model while trying to rescue a moribund economy,” he said, “they have a real uphill struggle ahead.”