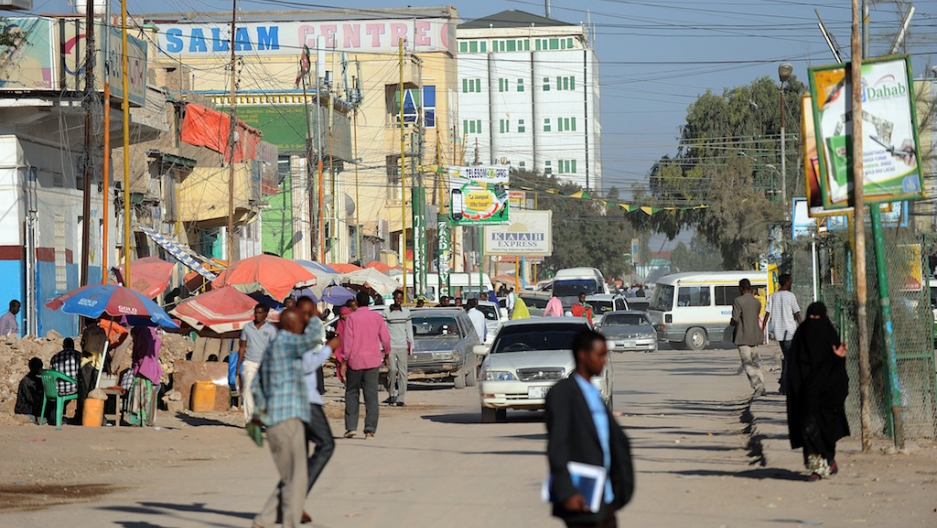 People walk in a street of Hargeisa, Somaliland, the northern breakaway nation of war-torn Somalia on Oct. 31, 2012. While war rages in southern Somalia — where regional armies and government troops battle Al Qaeda allied Al Shabaab fighters — the relative stability achieved in Somaliland offers a sliver of hope for the rest of the anarchic land.
Credit: Simon Maina
Share

The so-called government was the by-product of a UN-sponsored peace process that has been going on for more than 10 years. It involved billions in foreign aid, and some 17,000 African soldiers, who are the proxy of the United States military in Somalia. Yet Somalia is not better off than when the US intervened in the early ’90s.

Somalia’s agony continues. Today, 3 million people are desperately in need of food, 1.6 million have been displaced from their homes. In Mogadishu alone, 300,000 people survive on humanitarian relief. In addition, many people are suffering from chronic violence, the government’s inability to curb the unpaid and undisciplined soldiers who terrorize, loot and rape the population more than they protect.

Recent promising signs are present, such as Al Shabab, Al Qaeda affiliate militant group, retreating from urban centers in south central Somalia. Mogadishu, the capital, is also less dangerous than it was a year ago.

Survival of the-US backed weak government still depends on African troops, despite significant training and equipping of the Somali army by the US. Its leader Sheikh Mahamud, like his predecessor, Sheik Sharif, has absolutely no power and little following.

In contrast, out of the gaze of international media, the Somaliland entity, the former British Somaliland in the north, has shown all of the attributes of nationhood since 1991. These include a functioning government, constitution, defined borders and a flag. It even had two presidential elections, in 2003 and 2010, with a peaceful transfer of power.

Tragically, the US has not recognized Somaliland independence, because the UN and the African Union (AU) bias toward preserving artificial and inherently unstable states like Somalia and Congo.

The decision of the Obama administration to recognize a fictional government is more likely to complicate US efforts to stabilize Somalia. This position only rewards Somalia’s rapacious politicians and their militias at the expense of the 3.5 million Somaliland people that have largely managed their own affairs — not only to avoid to avoid chaos, terrorism and piracy, but to build a functioning democratic state.

Somalia’s tragedy will continue unless the new secretary of state, John Kerry, or the US Congress addresses this futile new policy of dictating political outcomes in this war-torn country.

Kerry also could contribute by defining the US long-term political objective in Somalia.

Outsiders have always made things worse by supporting the wrong groups for their own strategic interests. During the Cold War, America put nearly $1 billion in arms and economic aid into Somalia to prop up a cruel dictator, Siad Barre, who held power for 21 years through brutal military domination. The US-backed Ethiopian invasion six years ago created the environment in which Al Shabab is still wreaking havoc on south central Somalia.

Today, a weak government that cannot protect itself wants to monopolize Somalia. Sheikh Mahamud wishes to strengthen his Al Shabab-infiltrated military made up of rival local clan militias, and he is seeking more money and arms from the US and Turkey.

The more the US contributes to reconstituting a Somali government dominated by one faction of Somalia’s previous civil war, however, the greater the chance of dictatorship and bad governance returning to Somalia. It would be a grave mistake for the US to lift the arms embargo from Somalia.

Somalia needs a genuine political reconciliation, not more arms. The conflict and its politics in the country are always local. There is no military solution for this conflict.

Yet the Obama administration continues its deadly drone attacks against suspected militants in Somalia, which have caused collateral damages of civilians or even deaths.

Moreover, the options for US in Somalia are very limited; everything hinges on how Mogadishu’s politicians, warlords and war profiteers cooperate with Sheik Mahamud’s government. However, many Somalis are skeptical about the chance of a functioning regime emerging in Somalia with Mogadishu as its capital.

Rather than reinforcing a central government with no legitimacy, the US should support the only sources of strength in the area, democratic Somaliland and Puntland, an autonomous region. These entities have functioning political institutions that are organic, having organized by the local people.

More investment and trade instead of aid would offer the Somalis more opportunities to rebuild their shattered economy. America could also help Somaliland to create a free-trade zone with eastern Ethiopia at Berbera port — on the Gulf of Aden. These efforts, with the US forcefully supporting freedom and democracy in the region, would help to diminish or defeat radicalism.

However immensely difficult the mission of fixing Somalia might be, the US must engage and help the Somalis lift up from the agony. Only by following their aspirations and desires and not dictating the political outcomes would end Somalia’s tragedy. Moreover, diplomatic recognition of Somaliland is long overdue.