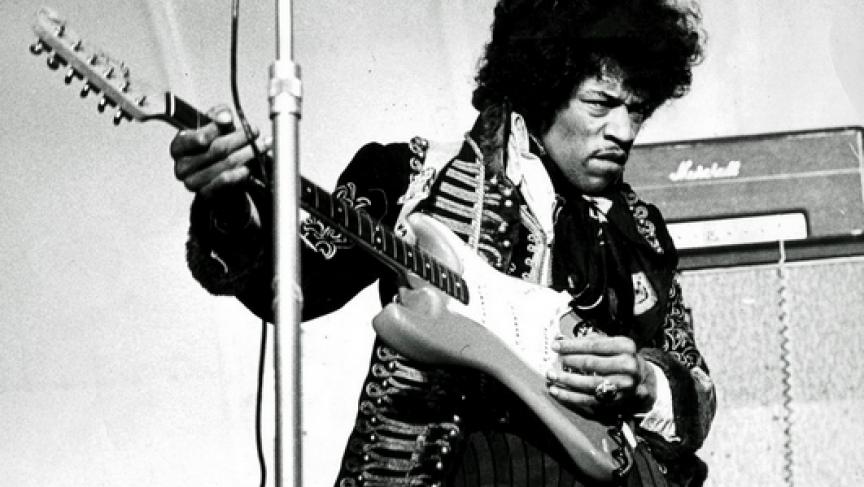 Jimi Hendrix performs at the Gröna Lund amusement park in Stockholm, Sweden, on May 24, 1967. (Photo by

In the coming months, there will be a new release of some of Hendrix’s recordings, and a movie about the musician’s life will debut.

What’s also amazing is that while Hendrix’s career was brief, he left behind a wealth of recorded material. New tapes of Hendrix seem to surface all the time. But none quite like the one I had the privilege of listening to recently.

But I’m getting ahead of myself. To tell you the story of this recording — which involves a rock god from Seattle, a literature professor from Massachusetts, and a soundboard in London — we have to go back exactly 44 years.

It’s Feb. 18, 1969, and The Jimi Hendrix Experience is arguably one of the biggest rock acts on the planet.

Hendrix himself is living in London in 1969. Now, you might be asking: how did one of America’s great rock musicians end up there?

Here’s how that happened. Back in 1966, Hendrix was in the states, making his way as the guitarist for acts like the Isley Brothers, Little Richard and King Curtis.

But Hendrix was also doing gigs with his own band. And at a show in New York City, Chas Chandler, the bassist for the British group The Animals, heard Hendrix play.

“Chas Chandler wanted to get out of playing and into management, and when he heard Hendrix playing in a little club in Greenwich Village, he thought, ‘I think I’ve found the person I want to manage,’” said Joel Brattin, who has written more than 250 articles on Hendrix. Chandler knew just what to do with the young guitarist.

“He brought Hendrix back to England, formed The Jimi Hendrix Experience with two British guys, Noel Redding on bass and Mitch Mitchell on drums, and started recording, and playing clubs and gigs in England,” Brattin said.

Hendrix’s girlfriend at the time, Kathy Etchingham, recently told the BBC how Brits reacted to his first gigs in London.

“Everyone’s eyes were glued to him. He looked different. His guitar playing was superb. People in England hadn’t seen anything like it before. It was quite ... out of this world,” she said.

British rock greats like Eric Clapton, The Stones and the Beatles took note, and suddenly all wanted to jam with Hendrix.

The Experience spent some months touring around Britain and Europe. The band released its first album, “Are You Experienced?” overseas.

And then came the famous performance at the Monterey Pop Festival in California in June of 1967.

That’s when Americans finally discovered what Jimi Hendrix was all about.

Of course, setting a guitar on fire and smashing it does make an impression, but it was his near miraculous playing that really wowed people.

The next few years were devoted to almost constant touring and recording. In short, working.

“Hendrix would put hours and hours in at the studio, then play a gig or maybe two gigs at night,” Brattin said. “When he was done with that, what would he want to do? Find somebody and jam. And many of those recordings are documented.”

I say part of his life’s work because Brattin’s also an expert on Charles Dickens. He teaches early 19th century literature at Worcester Polytechnic Institute in Massachusetts.

But he’s convinced that Hendrix is just as worthy of study as Dickens.

“Hendrix wasn’t a typical pop or rock musician,” Brattin said. “Hendrix was an improviser. So, if there are 100 different recorded versions of Purple Haze, it’s really worth listening to all 100 because he does something different each time.”

And that brings us back to Feb. 18, 1969. Some 44 years ago, The Jimi Hendrix Experience was gearing up to play the first of two gigs in London’s famous Royal Albert Hall.

The second show — on Feb. 24 — was pretty well recorded and documented. But not so the Feb. 18 show.

Brattin hands me a very marginal bootleg recording made by someone in the audience that night. He plays Hendrix’s version of “Hear My Train A-Coming.”

“It’s a song that was very close to Jimi Hendrix’s heart. It’s also just a lovely composition with a great range. It shows Hendrix’s expressiveness, his tenderness, his passion,” Brattin said.

But little of that comes through in the bootleg recording. In fact, it’s the kind of thing you’d expect, with lots of crowd noise, and hiss.

So imagine Brattin’s surprise when he recently got a note from the editor of UniVibes, a magazine devoted to all things Hendrix.

The editor asked Brattin if he wanted to review the soundboard recording from that very show. That meant audio taken directly from the mixing board used during the performance.

Brattin said yes, and a while later — while teaching Dickens in London, of course — he received the CDs.

Suddenly, the concert came alive in ways few had heard before. Brattin explains that you now get to hear the real Hendrix, and at an interesting point in time.

This is one of the last recorded shows he played with The Experience in Britain. By June of 1969, the band would break up and the members would go their separate ways. By September of the following year, Hendrix would be dead in London at the age of 27.

Brattin played most of the soundboard recording for me recently.

I asked Brattin all the usual questions. Who made the recording? Where was it all of these years? Who might’ve found it? Who could’ve been hiding it?

He wouldn’t answer any of that on the record.

“It might get weird,” he said with a smile.

Hendrix’s estate is pretty strict about the release of recordings such as these. Still, Brattin hopes that one day the soundboard recording for the Feb. 18, 1969, show in Royal Albert Hall will be released to a wider audience.

The demand, he says, will always be there for it.

“It is kind of incredible that Hendrix died more than 40 years ago, and he still tops readers polls all over the world. Number 1 guitarist, most influential guitarist, and so on,” Brattin said.

After the Feb. 18 gig, Jimi Hendrix went back to his London apartment and jammed on a 12 string Epiphone acoustic guitar. The tune of choice as caught by a video camera that was rolling?